These Are The Countries With The Greenest Economies. When it comes to the "green" economy in the U.S., perception outruns reality. 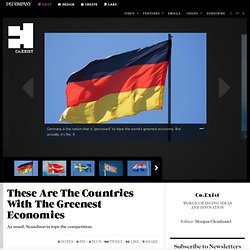 We may not be doing as well are we think we are. That's the conclusion from a new report ranking countries both for their green performance, and people's impressions of it. On the first, we rank sixth out of 60 nations. On the latter we rank 28th. The 2014 Global Green Economy Index, published by Dual Citizen, scores performance across four categories--leadership and climate change, efficiency, markets and investment, and environment--while aggregating a host of data for each. From the report: The U.S. ranks surprisingly well in the GGEI perception survey, driven by high scores as a target for investment and green innovation, and the perception that the U.S. is successfully greening key sectors like buildings and transport. China is another country that flatters to deceive. Overall, Sweden, Norway, Germany and Denmark come in the top five for both perception and performance. Fires-could-turn-amazon-rainforest-into-a-desert-as-human-activity-and-climate-change-threaten-lungs-of-the-world-says-study-9259741.

One of the last great wildernesses on earth – known as the lungs of the world – is balancing dangerously close to a “tipping point” where forest fires will become so commonplace and extensive that they will change much of the landscape forever, scientists said. 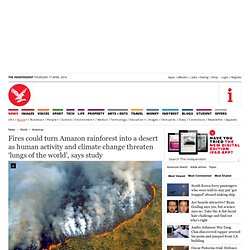 Although fires have always occurred in Amazonia, they have been largely controlled by the natural humidity of the region. Now, however, the drying out of the rainforest threatens to ignite the tree-filled habitat – with its rich biodiversity – and convert it almost overnight into barren desert, they warned. For the first time, scientists have shown in experiments on the ground how extreme, dry weather combined with the effects of human activities can create a tinderbox environment where intensely damaging forest fires can spread easily, killing trees that have taken hundreds of years to grow. 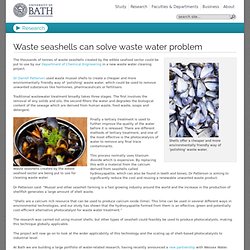 The thousands of tonnes of waste seashells created by the edible seafood sector could be put to use by our Department of Chemical Engineering in a new waste water cleaning project. Dr Darrell Patterson used waste mussel shells to create a cheaper and more environmentally friendly way of ‘polishing’ waste water, which could be used to remove unwanted substances like hormones, pharmaceuticals or fertilisers. 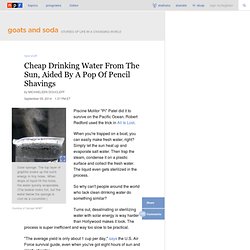 When drops of liquid fill the holes, the water quickly evaporates. (The beaker looks hot, but the water below the sponge is cool as a cucumber.) Courtesy of George Ni/MIT hide caption itoggle caption Courtesy of George Ni/MIT Solar sponge: The top layer of graphite soaks up the sun's energy in tiny holes. Courtesy of George Ni/MIT Piscine Molitor "Pi" Patel did it to survive on the Pacific Ocean. When you're trapped on a boat, you can easily make fresh water, right? So why can't people around the world who lack clean drinking water do something similar? Turns out, desalinating or sterilizing water with solar energy is way harder than Hollywood makes it look.

"The average yield is only about 1 cup per day," says the U.S. But engineer Hadi Ghasemi, at the University of Houston, is trying to change that. From Mushrooms to Mansions: Organic Building Materials. How A Young Physicist Is Making Solar Power Work, Even When The Sun Is Down. It is not unreasonable to expect that the renewable energy collected by the world’s solar panels and wind farms is being stored somewhere, ready and waiting to power our microwaves and hairdryers at a moment’s notice. 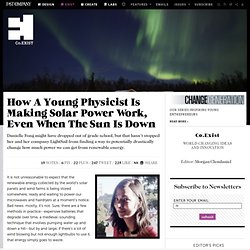 Bad news: mostly, it’s not. Sure, there are a few methods in practice--expensive batteries that degrade over time, a medieval-sounding technique that involves pumping water up and down a hill--but by and large, if there’s a lot of wind blowing but not enough lightbulbs to use it, that energy simply goes to waste. Hopefully, that’s about to change. Danielle Fong is the chief scientist (and grade-school dropout) behind LightSail Energy, a Berkeley-based team that’s developing compressed-air technology to store the power we don’t use, and return it to the grid when needed.

It’s a simple concept: Just use the electricity generated by your solar panel and/or windmill to power a compressor, pushing air into a tank. What does spraying water in do? Does the 2014 World Cup Score in Sustainability? In the heat of FIFA World Cup fever, we want to blow the whistle on the action for a moment to ask: how sustainable is the 2014 FIFA World Cup in Brazil? 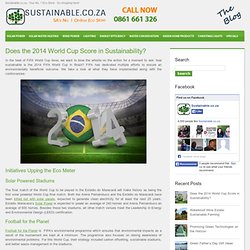 FIFA has dedicated multiple efforts to ensure an environmentally beneficial outcome. We take a look at what they have implemented along with the controversies: