Advanced Keying Techniques in After Effects - Tutorial. Keying smoke and water. Tips and tricks for compositing and creating popular effects like film flash and depth of field with After Effects. 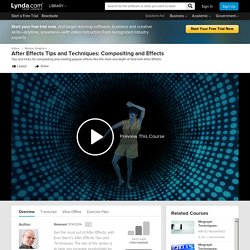 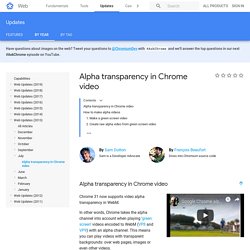 In other words, Chrome takes the alpha channel into account when playing 'green screen' videos encoded to WebM (VP8 and VP9) with an alpha channel. This means you can play videos with transparent backgrounds: over web pages, images or even other videos. There's a demo at simpl.info/videoalpha. Somewhat surreal, and a bit rough around the edges (literally) but you get the idea!

How to make alpha videos The method we describe uses the open source tools Blender and ffmpeg: Film your subject in front of a single color background such as a bright green curtain.Process the video to build an array of PNG still images with transparency data.Encode to a video format (in this case, WebM). There are also proprietary tools to do the same job, such as Adobe After Effects, which you may find simpler. 1.

The easiest way to do this is to film in front of a single color background, such as a screen or curtain. 2. 3. 4. Exporting for HTML 5 video (.webm & .ogg) I remember that vp8/webm, ogg/vorbis, and ogg/threora are formats which are open source. this may or may not be the issue. if there is an open source license attached to any/all of the formats, then you have to check the license first. then it's quite possible you will have to stick with miro for vp8/webm and ogg. apparently, directshow has filters for theora. who knows, maybe vp8/webm too. it is under the BSD 3-line license. the bsd license usually allows for commercial development, but you will have to look at the license to determine that, and I don't see it yet. in rthe colophon it said the theora bsd-like license doesn't restrict a 3rd party from implementing theora software (but it must support playback, even in the future according to wikipedia). vp8 is under the creative commons 3.0 license. that license is described here: I got the following from "google webm": this link contains encoder code, specifications, etc. this link is the vp8 draft spec RFP (request for porposal) 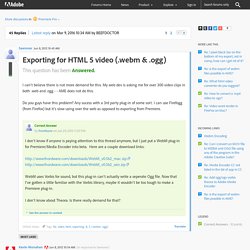 How To Create Transparent Videos For The Web – WVU #73. CreativeCOW. Understanding Straight vs. Premultiplied. Should be straight alpha, but it doesn't look l... Thanks for the suggestion - it basically worked. 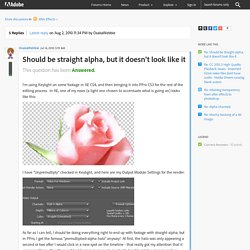 PPro CS3 doesn't appear to have an effect called "Alpha Key", so I used "Track Matte Key", specifying the track where I put the alpha clip and selecting Luma Key for the setting (setting it to Alpha Key didn't do anything, and it was clear that the "alpha" AVI was not an alpha channel per se, but just a regular video clip with a B&W representation of the transparency). I also don't see any effect called "Minimax". Anyway, I followed your suggestion as best I could with the tools I have - you must be using a newer version of PPro.

I can indeed see about a pixel or so that would be better if it was more transparent - I suspect your Minimax suggestion would have taken care of that. But this is definitely usable. Get the Best Out of Keylight > Color Keying in After Effects CS3. Hair detail: Are all of the "wispies" coming through? 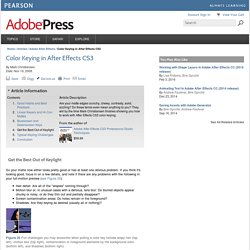 Motion blur or, in unusual cases with a defocus, lens blur: Do blurred objects appear chunky or noisy, or do they thin out and partially disappear? Screen contamination areas: Do holes remain in the foreground? Shadows: Are they keying as desired (usually all or nothing)? Alternatively, you may discover something fundamentally wrong with your matte: Ill-defined foreground/background separation or semi-transparency throughout the foreground or background Crunchy, chewy, or sizzling edges (feel free to invent your own such terms) Other noise in the matte Edge fringing or an overly choked matte Errors in the spill suppression Keylight anticipates these issues, offering specific tools and techniques to address them.

The Inner Workings of Keylight A few decisions are absolutely essential in Keylight; most of the rest compensate for the effectiveness of those few. Episode 18: Compositing Tips from 'Greenscreen Made Easy'