How Technology Is Fueling The Push Toward Solar. Solar energy in the United States has seen immense momentum throughout the years. 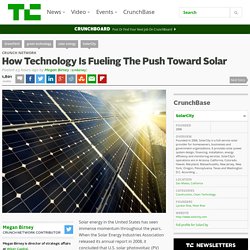 When the Solar Energy Industries Association released its annual report in 2008, it concluded that U.S. solar photovoltaic (PV) capacity reached a total of 1.183 gigawatts — a stellar achievement at the time. Contrast that figure with today, and the number is dwarfed by the United States’ installed capacity of 21.3 gigawatts, enough energy to power 4.3 million homes. As to what is powering this widespread adoption, one only needs to look at the residential market. According to recently released research by GTM, 72 percent of the market growth in 2014 is a result of solar tech companies offering diverse financing solutions and easy-to-navigate web platforms.

Going solar for homeowners has become as easy as online shopping. The commercial sector isn’t as fortunate, outside of a few large-scale projects driven by Fortune 500 and utility companies. Tech is changing that. Outpacing Commercial Solar A Bright Future. Incredible: a lamp that works without electricity, batteries or sunlight. Terms and Conditions Welcome to www.ewao.com (the "Website"). 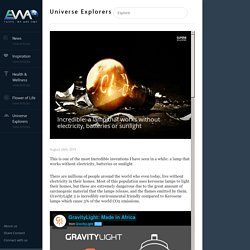 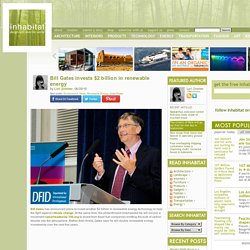 At the same time, the philanthropist emphasized he will not join a movement spearheaded by 350.org to divest from fossil fuel companies emitting the bulk of carbon dioxide into the atmosphere. Rather than divest, Gates says he will double renewable energy investments over the next five years. The Bill and Melinda Gates Foundation plans to invest the $2 billion in breakthrough renewable energy technologies to help reduce global CO2 emissions. Although he is investing these funds, Gates told the Financial Times he believes current projects will only scratch the surface of renewable energy needs by 2030. 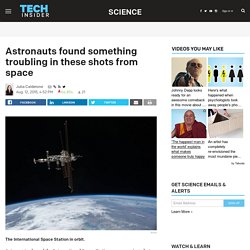 Astronauts aboard the International Space Station are snapping photos of Earth to measure light pollution, and they've found something surprising: Light-emitting diodes (LEDs) — which are touted for their energy-saving properties — are actually making light pollution worse. And the change is so intense that ISS crew members can see it from space. To see it, take a look at these photos that astronauts snapped of the bustling city of Milan. Before Milan transitioned to LEDs, in 2012, the lighting levels in the surrounding suburbs were about the same as those of the city center. NASA/ESAImage of Milan at night in 2012, captured by astronauts aboard the ISS.

But by 2015, after the city transitioned to LEDs, illumination levels in the city center were much brighter than those of the suburbs, with a higher amount of blue light. This glass sphere might revolutionize solar power on Earth. German architect André Broessel, of Rawlemon, has looked into his crystal ball and seen the future of renewable energy. 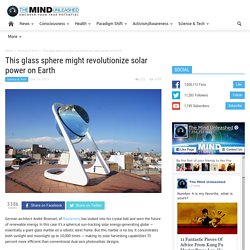 In this case it’s a spherical sun-tracking solar energy-generating globe — essentially a giant glass marble on a robotic steel frame. But this marble is no toy. It concentrates both sunlight and moonlight up to 10,000 times — making its solar harvesting capabilities 35 percent more efficient than conventional dual-axis photovoltaic designs. André Broessel was a finalist in the World Technology Network Award 2013 with the globe’s design and afterward produced this latest version, called Betaray, which can concentrate diffuse light such as that from a cloudy day. André Broessel’s latest invention looks like something out of a superhero movie. In reality, though, it’s a stand-alone solar energy generator. Climate Change Could Be Reduced by Solar Roads. Currently, humanity is on the brink of environmental disaster due to climate change. 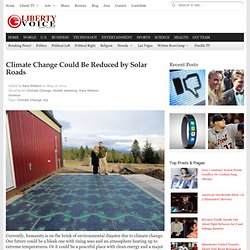 Our future could be a bleak one with rising seas and an atmosphere heating up to extreme temperatures. Or it could be a peaceful place with clean energy and a major reduction of the usage of oil, gas and coal a thing of the past. If one couple in Idaho gets their way, this clean green future could include their very own invention, solar roads. As a child, Scott Brusaw spent many a long afternoon setting up roads for his electric toy cars to run on. Environmental Management & Energy News · Environmental Leader.