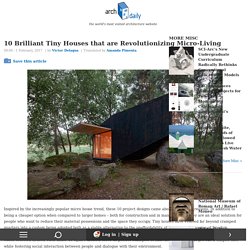 In addition to being a cheaper option when compared to larger homes – both for construction and in maintenance – they are an ideal solution for people who want to reduce their material possessions and the space they occupy. Tiny houses have evolved far beyond cramped quarters into a custom being adopted both as a viable alternative to the unaffordability of housing and a source of freedom. These selected houses, each under 40 square meters, serve as perfect examples of innovative designs that provide a simpler life, while fostering social interaction between people and dialogue with their environment. Check out the 10 examples below. Forest Retreat / Uhlik architekti Area: 16.0 m² "We designed a compact enclosed volume – an object resting freely on boulders with a stern raised on a huge boulder. 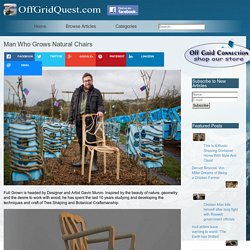 Inspired by the beauty of nature, geometry and the desire to work with wood, he has spent the last 10 years studying and developing the techniques and craft of Tree Shaping and Botanical Craftsmanship. "In essence its an incredibly simple art. You start by training and pruning young tree branches as they grow over specially made formers. At certain points we then graft them together so that the object grows in to one solid piece – I’m interested in the way that this is like an organic 3D printing that uses air, soil and sunshine as its source materials.

After it’s grown into the shape we want, we continue to care for and nurture the tree, while it thickens and matures, before harvesting it in the Winter and then letting it season and dry. Here in the Furniture Field there are Limited Editions of Chairs, Tables, Lamps and Mirrors growing into shape and maturing.

Garden. DIY. YOURHOME-6-HousingOfFuture-1-AdaptingClimateChange-(4Dec13).pdf. Top 5 signs your ancestors were geniuses at beating the heat. Before air conditioning in the latter half of the 20th century, humankind didn't just suffer in the heat. 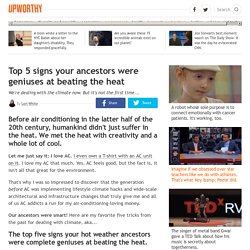 We met the heat with creativity and a whole lot of cool. Let me just say it: I love AC. I even own a T-shirt with an AC unit on it. I love my AC that much. Yes, AC feels good, but the fact is, it isn't all that great for the environment. That's why I was so impressed to discover that the generation before AC was implementing lifestyle climate hacks and wide-scale architectural and infrastructure changes that truly give me and all of us AC addicts a run for my air-conditioning-loving money. Our ancestors were smart! The top five signs your hot weather ancestors were complete geniuses at beating the heat. #1: They planted trees! Image via Ken Lund/Flickr. There's a strategic way to do it. "Southerners would always try to plant theirs on the east and west sides of their homes, to protect from the rays of the rising and setting sun. " #2: They built things in special ways. 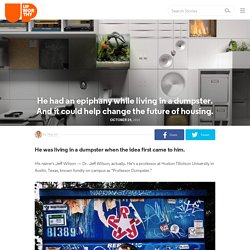 His name's Jeff Wilson — Dr. Jeff Wilson, actually. He's a professor at Huston-Tillotson University in Austin, Texas, known fondly on campus as "Professor Dumpster. " Photo by Jeff Wilson/Wikimedia Commons. Wilson made himself the guinea pig in a year-long experiment on sustainable living. He traded a 3,000-square-foot home and most of his worldly possessions for a spartan 33-square-foot living space created in a big green dumpster. Wilson's experiment eventually became a nonprofit called The Dumpster Project that "invites learners of all ages to rethink sustainability through the quirky task of turning a dumpster into a home.

" In an interview with the Washington Post, Wilson said the experience made him happier than he's ever been. Living in a dumpster may not be for everyone, but Wilson thinks smart home engineering can yield the same benefits.