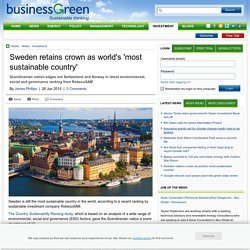 The Country Sustainability Ranking study, which is based on an analysis of a wide range of environmental, social and governance (ESG) factors, gave the Scandinavian nation a score of eight out of 10. Sweden narrowly beat Switzerland and Norway to the pole position, retaining the number one ranking it secured last year. The report praised the country for its high performance against a range of green metrics, arguing its ability to respond to environmental threats mitigates risks for investors.

The country also performed highly in against so-called governance metrics, including its commitment to liberty and equality, and social factors such as investment in education. However, Sweden received only an average score for its energy usage and the proportion of power coming from renewable energy, demonstrating room for improvement. Apple Forges Historic Partnership on Forests.

Marking a precedent-setting conservation partnership, Apple and the Conservation Fund will purchase two large areas of working forest, the organizations announced on Thursday. 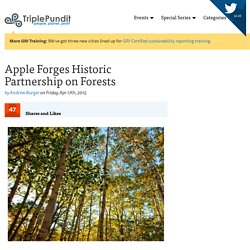 The move is expected to conserve “more than 36,000 acres of working forestland in Maine and North Carolina, ensuring these forests stay forests and any timber on the land is harvested sustainably,” the partners said in a joint announcement. This initial purchase of U.S. working forestland marks “the beginning of a worldwide effort, one that represents a new approach as it reassesses its impact on the world’s paper supply chain,” Lisa P. Jackson, Apple’s vice president of environmental initiatives, and Larry Selzer, president and CEO of the Conservation Fund, wrote in a Medium op-ed.

Prior to joining Apple, Jackson led the U.S. EPA as President Barack Obama’s EPA Administrator from 2009 to 2013. China's Clean Revolution A Top Governmental Priority. Date 09 November 2012 The change in China’s leadership is no doubt at the very centre of global attention – at an almost equal level with the American Presidential election. 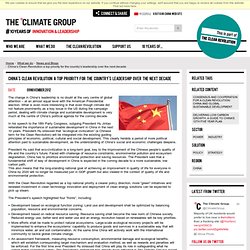 What is even more interesting is that even though climate did not feature prominently as a key issue in the US during the campaign period, dealing with climate change and sustainable development is very much at the centre of China’s political agenda for the coming decade. In his speech to the 18th Party Congress, outgoing President Hu Jintao reiterated the importance of sustainable development in China in the next 10 years. President Hu stressed that “ecological civilization” (a Chinese term for the Clean Revolution) will be integrated into the existing guiding principles of economic, political, cultural and social development.

Where the Stimulus Money Went: New Buildings, Clean Energy and Infrastructure Projects. Photo © Chad Ress When it comes to President Obama’s domestic policy, healthcare reform gets all the attention while Obama’s other main achievement, the American Recovery and Reinvestment Act — better known as “the stimulus” — is often dismissed by the president’s opponents and supporters alike. 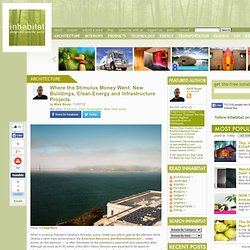 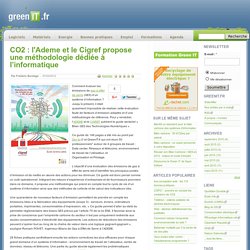 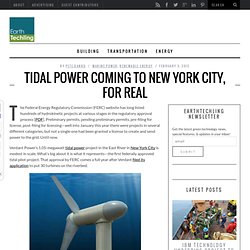 Preliminary permits, pending preliminary permits, pre-filing for license, post-filing for licensing—well into January this year there were projects in several different categories, but not a single one had been granted a license to create and send power to the grid. Slideshare. Hébergeur › Le premier datacenter zéro émission est islandais. How to Save a Planet - On a Budget. Please complete all fields below. 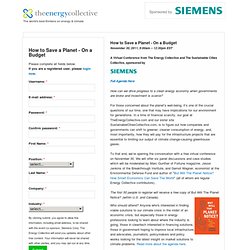 How to Save a Planet - On a Budget November 30, 2011, 9:00am -- 12:30pm EST A Virtual Conference from The Energy Collective and The Sustainable Cities Collective, sponsored by Full Agenda Here. Pecan Street Inc. Top 10 small-scale renewable energy innovators. Abu Dhabi hosting the World Future Energy conference is like Dracula running a meeting of blood coagulant specialists. 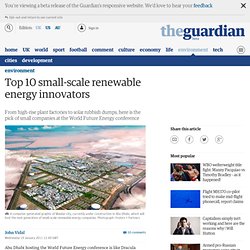 Never mind that the emirate has vast oil and gas reserves and is throwing up scandalously inefficient buildings by the score, it really wants to make the world believe that the future will be renewable power. Money is no object here; not only did Abu Dhabi spend big undisclosed amounts in its campaign to house the proposed International Renewable Energy Agency, the emirate is pumping billions of dollars into Masdar City, billed as the world's first carbon-neutral city.