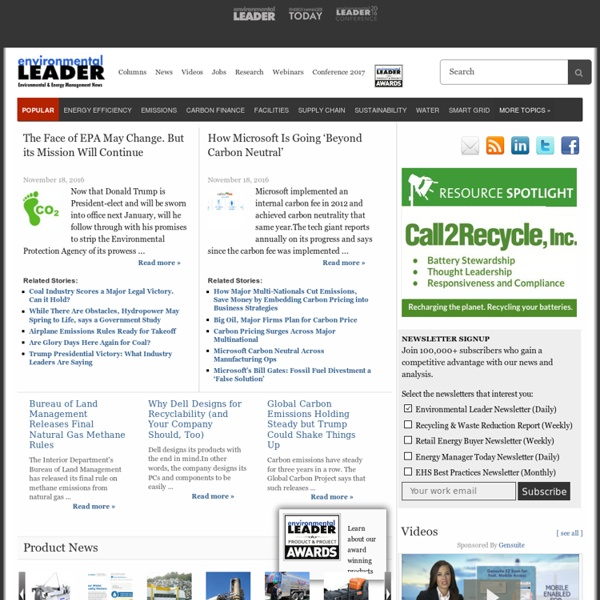 11 Ingenious Solar Projects Impacting the Developing World It's easy to take energy for granted, forgetting that throughout much of the world, a lack of power affects everything from business to education to matters of life and death. Approximately 1.5 billion people still don't have access to electricity worldwide, with an additional 1 billion having only intermittent access. By using the power of the sun — the ultimate natural resource — these issues can be ameliorated, if not solved. Scientists, social entrepreneurs and even big tech companies are working to make strides with solar power. The gallery above highlights some of the coolest and most innovative solar projects out there today. Whether it's simple lanterns with solar panels at the top, large stills that turn steam into drinking water or even artificial leaves that mimic photosynthesis, you'll be amazed what the sun can do. Have something to add to this story? Image: Gabriele Diamanti

Green News and Opinion on The Huffington Post Climate Change Could Be Reduced by Solar Roads Currently, humanity is on the brink of environmental disaster due to climate change. Our future could be a bleak one with rising seas and an atmosphere heating up to extreme temperatures. Or it could be a peaceful place with clean energy and a major reduction of the usage of oil, gas and coal a thing of the past. If one couple in Idaho gets their way, this clean green future could include their very own invention, solar roads. As a child, Scott Brusaw spent many a long afternoon setting up roads for his electric toy cars to run on. He would think about a future where all roads were electric allowing kids like him to drive. In the midst of the mid-2000s, with the debate about climate change beginning, Brusaw and his wife Julie wanted to think of a project that could reduce the effects on the environment caused by global warming. The couple reasoned that the material used to make the roads needed to be excessively strong. By Sara Watson Sources: CNNBusiness InsiderSolar Roadways

Wireless power The most common form of wireless power transmission is carried out using direct induction followed by resonant magnetic induction. Other methods under consideration are electromagnetic radiation in the form of microwaves or lasers[1] and electrical conduction through natural media.[2] Electric energy transfer[edit] An electric current flowing through a conductor, such as a wire, carries electrical energy. When an electric current passes through a circuit there is an electric field in the dielectric surrounding the conductor; magnetic field lines around the conductor and lines of electric force radially about the conductor.[3] In a direct current circuit, if the current is continuous, the fields are constant; there is a condition of stress in the space surrounding the conductor, which represents stored electric and magnetic energy, just as a compressed spring or a moving mass represents stored energy. Electromagnetic induction[edit] Electrodynamic induction method[edit]

This glass sphere might revolutionize solar power on Earth German architect André Broessel, of Rawlemon, has looked into his crystal ball and seen the future of renewable energy. In this case it’s a spherical sun-tracking solar energy-generating globe — essentially a giant glass marble on a robotic steel frame. But this marble is no toy. It concentrates both sunlight and moonlight up to 10,000 times — making its solar harvesting capabilities 35 percent more efficient than conventional dual-axis photovoltaic designs. André Broessel was a finalist in the World Technology Network Award 2013 with the globe’s design and afterward produced this latest version, called Betaray, which can concentrate diffuse light such as that from a cloudy day. André Broessel’s latest invention looks like something out of a superhero movie. In reality, though, it’s a stand-alone solar energy generator. But Broessel’s invention may be more than just aesthetically pleasing. “We can squeeze more juice out of the sun,” Broessel says. Source: NewsDiscovery

Sustainability in Sweden Johan and Franz checking if the bees have a queen. The rain and the bees flying around don’t really appear on this photo, but I can tell you they were everywhere… Photo: Sara Jeswani. “Congratulations, you’ve got bees!” It was the beginning of July and I was sitting on a boat, far away from Stockholm, when my mobile phone beeped. I was wrong. Honey bees are extremely interesting animals. Reading about the importance of bees and how they are now more and more threatened,I had decided to learn a bit more and joined a beekeeping course in the beginning of this year. Trying the get the loose honey bees out of the car before driving across the city. The thing about bees is that the more you learn about them the more intriguing they get. I would really like to have a beehive, i thought – in a couple of years. Who knows if it would ever have happened, if it wasn’t for this lottery. Last week it was finally time to move the bees from their current home in a park north of Stockholm.

Bill Gates invests $2 billion in renewable energy Bill Gates has announced plans to invest another $2 billion in renewable energy technology to help the fight against climate change. At the same time, the philanthropist emphasized he will not join a movement spearheaded by 350.org to divest from fossil fuel companies emitting the bulk of carbon dioxide into the atmosphere. Rather than divest, Gates says he will double renewable energy investments over the next five years. The Bill and Melinda Gates Foundation plans to invest the $2 billion in breakthrough renewable energy technologies to help reduce global CO2 emissions. Related: Bill Gates tackles child mortality with $75M network of disease surveillance centers Over the past few years, Gates has been criticized for his investments in fossil fuel companies such as BP, which inspired The Guardian to launch a campaign asking the Gates’ Foundation and Wellcome Trust to divest from these companies. + Bill and Melinda Gates Foundation Via The Guardian

Solar Roadways Solar panels that you can drive, park and walk on. They melt snow & cut greenhouse gases by 75% ?!!! Solar Roadways will be featured this Saturday morning, February 14th on Innovation Nation on CBS with Mo Rocca. Adam Yamaguchi and Scott Brusaw We made President Obama's State of the Union Address - 2015! Julie and Scott in the White House's Blue Room. Solar Roadways made the list for 2014 - what an honor! We are excited to announce that Indiegogo has asked us to join their InDemand program: It allows teams to re-open their campaigns and continue raising funds for their projects. We are very excited about this for many reasons: · We've had numerous requests since our original campaign ended: "Can I still donate?" · We're still in Research & Development, so we're not making a profit yet. · We received donations from 165 countries, which is a clear indication that the world is ready for the paradigm shift Solar Roadways will become. What's been happening since we closed our original campaign?

Want to Build Your own SCADA? Here’s a Guideline. Whether you can’t find a pre-built SCADA package that suits your needs or you simply want to build it yourself to ensure future customizability, the build-your-own SCADA path is still an option today. But the checklist of to-do items has certainly grown a lot longer with the need for interoperability, real-time readouts, and remote access. Nick Mudge, a software consultant at Perfect Abstractions and certified Inductive Automation SCADA integrator, says that the first steps in the process of building your own SCADA involve establishing the communications and data framework for the system. According to Mudge, the following functionality should be viewed as extremely useful for your self-built SCADA system, if not required: * Ability to talk to devices and PLCs and/or useOPC-UA. This is needed for real-time monitoring and control of equipment. * A sub-framework for use by third-party developers to implement communication protocols that are not provided by the framework. * Drawing tools.