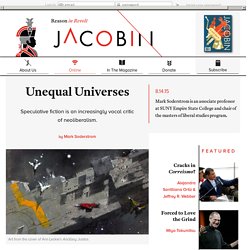 People face imminent environmental disaster. The public servants sworn to protect them from the supernatural horrors that walk in the ice and snow are severely underfunded and face crippling labor shortages. Meanwhile, social elites engage in endless political bickering, vying for control in a faraway capital while creating a sovereign debt crisis and using the public purse to line their own pockets. Two Books You Must Read If You Care About the Future of Humanity in Space. The Collapse of Western Civilization - Speculation on Our Future. January 12, 2015 - "Science fiction writers construct an imaginary future; historians attempt to reconstruct the past. 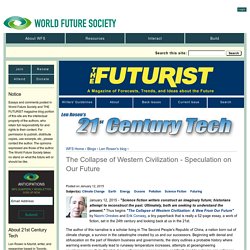 Ultimately, both are seeking to understand the present. " The Peripheral: William Gibson discusses technology and predicting the future. Photo by Elisabetta A. 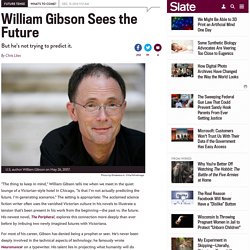 Villa/WireImage “The thing to keep in mind,” William Gibson tells me when we meet in the quiet lounge of a Victorian-style hotel in Chicago, “is that I’m not actually predicting the future. I’m generating scenarios.” The setting is appropriate: The acclaimed science fiction writer often uses the vanished Victorian culture in his novels to illustrate a tension that’s been present in his work from the beginning—the past vs. the future. His newest novel, The Peripheral, explores this connection more deeply than ever before by imbuing two newly imagined futures with Victoriana.

For most of his career, Gibson has denied being a prophet or seer. The most extraordinary and inspiring vision of the future I've ever seen. The Future As History. It is a risky business trying to predict the future, and although it makes some sense to try to get a handle on what the world might be like in one’s lifetime, one might wonder what’s even the point of all this prophecy that stretches out beyond the decades one is expected to live? 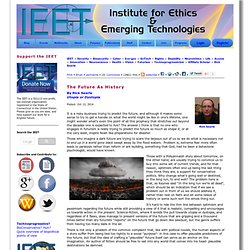 The answer I think is that no one who engages in futurism is really trying to predict the future so much as shape it, or at the very least, inspire Noah like preparations for disaster. Those who imagine a dark future are trying to scare the bejesus out of us so we do what is necessary not to end up in a world gone black swept away by the flood waters. Problem is, extreme fear more often leads to paralysis rather than reform or ark building, something that God, had he been a behavioral psychologist, would have known. Hon is perhaps uniquely positioned to give us a feel for where we are currently headed. 3 Near-Future Scenarios That Are Changing The Way We Work Today. The nature of work has been changing at an incredible rate. 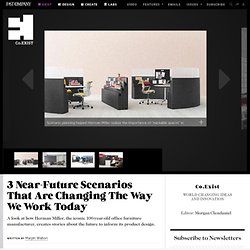 Work has become inherently global and seamlessly digital. The traditional roles of organizations and individuals have blurred as the means of production and creation have become democratized. Short film: Machines keep on fighting a war even though everyone is dead. Recommended by Casey Chan. 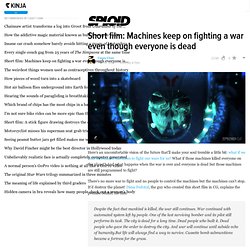 A Desirable-Future Haiku — The Message. Recently I sent a twitter request out into the wider internets. 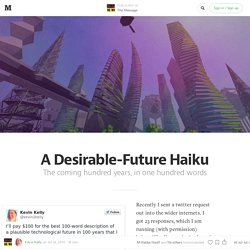 I got 23 responses, which I am running (with permission) below. I’ll tell you who I selected as the winner in a moment, but first I’d like to tell you what I learned. It’s a hard assignment. The scientific A-Team saving the world from killer viruses, rogue AI and the paperclip apocalypse. Cambridge, some time after the end of term. 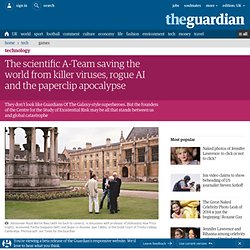 Demob-happy undergraduates, dressed for punting and swigging wine from the bottle, seem not so much to be enjoying themselves as determinedly following rites of passage on the way to a privileged future. I am heading towards the biggest, richest and arguably most beautiful college: Trinity. Of the 90 Nobel prizes won by members of Cambridge University in the 20th century, 32 were won by members of Trinity. Its alumni include Isaac Newton, Wittgenstein, Bertrand Russell and six prime ministers. 5 Visions for the Future of New York City Streets. Search the page for the word "truck" and see how many hits you get. 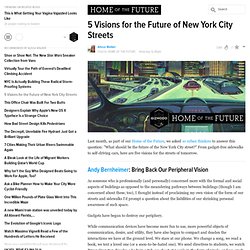 I'll spoil the answer for you: it's 0 results. That's really kind of a disastrous omission because even if car culture dies (and in NYC and Chicago is has) truck culture wont. You still need physical stuff brought to you from the intermodal yard or wherever. A Vision of the Future From Those Likely to Invent It. “Phones and computers will automatically do anything tedious that doesn't require brainpower, like signing up for a web site or app. 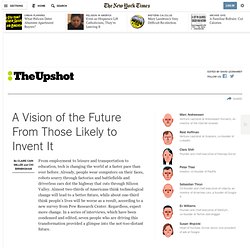 The march of technology is the incessant march of convenience.” Ev Williams “Fully immersive virtual reality.” Peter Thiel “Hundreds or thousands of drones flying to and fro for all kinds of reasons. L.P.D.: Libertarian Police Department. I was shooting heroin and reading “The Fountainhead” in the front seat of my privately owned police cruiser when a call came in. I put a quarter in the radio to activate it. It was the chief. “Bad news, detective. We got a situation.” “Worse. Australia_2050_v1_ls_0.pdf. IRI2038_Scenario_Report_Final.pdf. New Reported NASA Doomsday Scenario - Real or a Hoax? March 17, 2014 - In today's UK Huffington Post the following headline appears - Civilisation Is Doomed Warns Safa Motesharri's Nasa-Funded Study. The author is mathematician, Safa Motesharri, who applies what is described as a "highly simplified model" to predict the future path of modern industrial society. This model, called the Human and Nature DYnamical (HANDY) purportedly looks at population, climate change, freshwater, agriculture, energy and other factors to predict the outcome of our civilization.

Nasa-funded study: industrial civilisation headed for 'irreversible collapse'? A new study partly-sponsored by Nasa's Goddard Space Flight Center has highlighted the prospect that global industrial civilisation could collapse in coming decades due to unsustainable resource exploitation and increasingly unequal wealth distribution. Noting that warnings of 'collapse' are often seen to be fringe or controversial, the study attempts to make sense of compelling historical data showing that "the process of rise-and-collapse is actually a recurrent cycle found throughout history.

" Cases of severe civilisational disruption due to "precipitous collapse - often lasting centuries - have been quite common. " What will blow our minds in the *next* 30 years? Predictions are a mug’s game. If they come true, you likely didn’t push your thinking hard enough. If they don’t come true, you risk looking like an idiot. Nonetheless, many speakers at the annual TED conference have taken the plunge and proffered thoughts of what the future might look like. The video above takes a quick spin through just some of them, with thoughts from tech pioneers including Nicholas Negroponte, Rodney Brooks, Jeff Han and Pattie Maes. Below, we asked many of the attendees and speakers at this year’s just-wrapped TED to riff off the conference’s theme (“The Next Chapter”) and tell us what they think might radically change society, life, technology and so on in the *next* 30 years. What Did We Learn in State of the Future Report?

20 Crucial Terms Every 21st Century Futurist Should Know. Futurist Says We'll Use Lasers to Beam Our Minds Into Space Someday Soon. Iftf : Government Service of the Future? 2020 by Trend Micro. Connected Air: Smart Dust Is The Future Of The Quantified World. Government Service of the Future? Visions from Dubai. The United Arab Emirates have been one of the most aggressive nations on Earth in implementing tech-driven, customer-driven government services. So, when visions of tech-driven, customer-driven services are exhibited on its soils, one must pay close attention. This is a place where today’s fictions become tomorrow’s reality with almost magical efficiency.