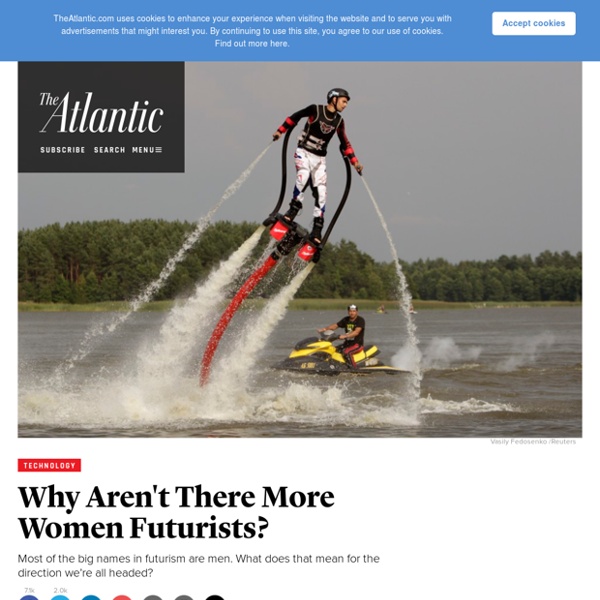 In the future, everyone’s going to have a robot assistant. That’s the story, at least. And as part of that long-running narrative, Facebook just launched its virtual assistant. They’re calling it Moneypenny—the secretary from the James Bond Films. Which means the symbol of our march forward, once again, ends up being a nod back. Why can’t people imagine a future without falling into the sexist past? Both the World Future Society and the Association of Professional Futurists are headed by women right now. Somehow, I’ve become a person who reports on futurists. It turns out that what makes someone a futurist, and what makes something futurism, isn’t well defined. Zalman defines a futurist as a person who embraces a certain way of thinking. Frewen says that futurism won’t ever be like architecture or medicine, in that “it’s never going to be a licensed field.” Some people think of science fiction authors as futurists, while others don’t. Why are there so few women? Related:  foresight

Sleeping Through a Revolution — Aspen Ideas In my last letter, I told you there was a time in the late ’60s when the most critically acclaimed movies and music were also the best selling. The Beatles’s Sgt. Pepper album or Francis Coppola’s Godfather film were just two examples. I said that that is not happening anymore, and I wanted to explore with you why this change occurred. Because I spent the first 30 years of my life producing music, movies, and TV, this question matters to me, and I think it should matter to you. So I want to explore the idea that the last 20 years of technological progress — the digital revolution — have devalued the role of the creative artist in our society. I undertake this question with both optimism and humility. In the last few years I have run the Annenberg Innovation Lab at the University of Southern California. We have become convinced that only machines and corporations make the future, but I don’t think that is true. Whew! But this does not account for the role of the Digital Bandits.

The Future of Global Connectivity - SnapMunk Some of the biggest players in the tech industry have been quietly developing initiatives aimed at connecting everyone around the world to the internet. Examples like Google’s Project Loon, Facebook’s Internet.org and newcomer Outernet have all made tremendous strides over the last year. Which one will come out on top? Since each one has taken a different approach, the answer may be all three. Project Loon Google’s initiative involves deploying high altitude balloons to serve as signal relays for traditional telecomm customers who reside in remote areas where reception is limited or non-existent. Internet.org Most people know Facebook for its social platform, but few would peg the tech juggernaut as a player in the data connectivity game. Outernet A relative newcomer to the game, Outernet has developed a satellite platform that enables users to view the internet simply by purchasing a receiver. Conclusion Despite their varying approaches, one thing is clear.

JFS19-4-Article3-Novaky-Orosz.pdf Apophenia Apophenia /æpɵˈfiːniə/ is the experience of perceiving patterns or connections in random or meaningless data. The term is attributed to Klaus Conrad[1] by Peter Brugger,[2] who defined it as the "unmotivated seeing of connections" accompanied by a "specific experience of an abnormal meaningfulness", but it has come to represent the human tendency to seek patterns in random information in general, such as with gambling and paranormal phenomena.[3] Meanings and forms[edit] In 2008, Michael Shermer coined the word "patternicity", defining it as "the tendency to find meaningful patterns in meaningless noise".[6][7] In The Believing Brain (2011), Shermer says that we have "the tendency to infuse patterns with meaning, intention, and agency", which Shermer calls "agenticity".[8] Statistics[edit] Pareidolia[edit] Pareidolia is a type of apophenia involving the perception of images or sounds in random stimuli, for example, hearing a ringing phone while taking a shower. Gambling[edit] Examples[edit]

William Gibson on finding the future in the strangeness of now - Home | q Tuesday November 25, 2014 It's been 30 years since William Gibson changed the vocabulary of science fiction with his first book, Neuromancer. Now his latest novel, The Peripheral, puts a sci-fi lens on a new set of modern anxieties, including climate change, drones and casual mass surveillance. The Vancouver-based author joins guest host Tom Power to discuss the "unthinkable present", how cyberspace (a term he coined) has colonized the real world, and why he thinks his reputation for prescience is undeserved. WEB EXTRA | Read an excerpt of The Peripheral here Sci-fi master William Gibson envisions a world in which privacy no longer exists (Michael O'Shea/Canadian Press)

Ray Kurzweil's Mind-Boggling Predictions for the Next 25 Years In my new book BOLD, one of the interviews that I’m most excited about is with my good friend Ray Kurzweil. Bill Gates calls Ray, “the best person I know at predicting the future of artificial intelligence.” Ray is also amazing at predicting a lot more beyond just AI. This post looks at his very incredible predictions for the next 20+ years. Ray Kurzweil. So who is Ray Kurzweil? He has received 20 honorary doctorates, has been awarded honors from three U.S. presidents, and has authored 7 books (5 of which have been national bestsellers). He is the principal inventor of many technologies ranging from the first CCD flatbed scanner to the first print-to-speech reading machine for the blind. In short, Ray’s pretty smart… and his predictions are amazing, mind-boggling, and important reminders that we are living in the most exciting time in human history. But, first let’s look back at some of the predictions Ray got right. Predictions Ray has gotten right over the last 25 years In 1999, he predicted…

List of the world's top female futurists (Updated) - [UPDATE November 3, 2015: We have added 65 futurists to the list for a total of 143. Thank you for for your help building out the list!] I find I am frequently asked where all the female futurists are. Recently the discussion on why the profession of futurist appears to be so male-dominated has grown. I know many outstanding female futurists, so whenever I am asked I point to a range of exceptional futurists to show that there are indeed many women in the field. As such I thought it would be useful to compile a list of the world’s top female futurists, for those who are looking for diversity in their insights into the future. It is tricky defining a futurist, so while we have largely selected those who describe themselves as working in this space, we have also included others whose work is largely that of exploring the future. We have limited this list to those who have a significant profile and impact, but I’m sure we have missed some who should be included.

cognitive biases in futurist thinking Hedgehog and fox finger puppetsby Linda Brown (Etsy shop owner) “No serious futurist deals in predictions”. These are the famous words of Alvin Toffler in his seminal book Future Shock from 1971. The availability bias explains that people have the idea that whatever is recalled easily must be very common. The anchoring bias is also what makes it difficult not to be influenced too much by current affairs. The confirmation bias states that people tend to confirm their beliefs. We also observe here the confidence bias, which works on top of the confirmation bias. The narrative fallacy points at the basis human tendency of telling stories. Both Taleb and Garner build on the work of Philip Tetlock, who distinguished two types of predictors: the hedgehog and the fox. Futurists needs these introspective moments. Twitter: @FreijavanDuijne Futuring is my passion.

The 10 Best Sci-Fi Fantasy Novels of 2015 So Far | Flavorwire | Page 10 Generation ships, sentient forests, exploding moons — there has been no shortage of action, speculation, and mystery in the year’s best sci-fi and fantasy novels. These books are remarkable, too, for the way they brazenly combine tropes from many different genres. In several of these novels, for example, mythological, intellectual, and literary history combine in unfamiliar and enlightening ways. Aurora, Kim Stanley Robinson Call it an ark, a generation ship — whatever.