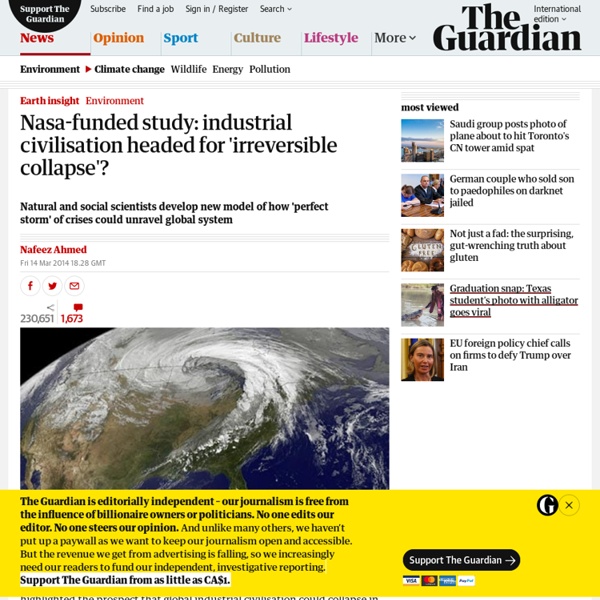 A new study partly-sponsored by Nasa's Goddard Space Flight Center has highlighted the prospect that global industrial civilisation could collapse in coming decades due to unsustainable resource exploitation and increasingly unequal wealth distribution. Noting that warnings of 'collapse' are often seen to be fringe or controversial, the study attempts to make sense of compelling historical data showing that "the process of rise-and-collapse is actually a recurrent cycle found throughout history." Cases of severe civilisational disruption due to "precipitous collapse - often lasting centuries - have been quite common." The independent research project is based on a new cross-disciplinary 'Human And Nature DYnamical' (HANDY) model, led by applied mathematician Safa Motesharrei of the US National Science Foundation-supported National Socio-Environmental Synthesis Center, in association with a team of natural and social scientists.

New Reported NASA Doomsday Scenario - Real or a Hoax? March 17, 2014 - In today's UK Huffington Post the following headline appears - Civilisation Is Doomed Warns Safa Motesharri's Nasa-Funded Study. The author is mathematician, Safa Motesharri, who applies what is described as a "highly simplified model" to predict the future path of modern industrial society. This model, called the Human and Nature DYnamical (HANDY) purportedly looks at population, climate change, freshwater, agriculture, energy and other factors to predict the outcome of our civilization. Guess what? We are doomed just like the Roman Empire, the Han of China, the Harappa of the Indus River, the Anasazi of the American southwest, the Mauryan and Gupta Empires and so many more. The conclusions are drawn from current over consumption, limited carrying capacity of the planet, increased socioeconomic stratification and many other factors.

An online Magna Carta: Berners-Lee calls for bill of rights for web The inventor of the world wide web believes an online "Magna Carta" is needed to protect and enshrine the independence of the medium he created and the rights of its users worldwide. Sir Tim Berners-Lee told the Guardian the web had come under increasing attack from governments and corporate influence and that new rules were needed to protect the "open, neutral" system. Speaking exactly 25 years after he wrote the first draft of the first proposal for what would become the world wide web, the computer scientist said: "We need a global constitution – a bill of rights." Berners-Lee's Magna Carta plan is to be taken up as part of an initiative called "the web we want", which calls on people to generate a digital bill of rights in each country – a statement of principles he hopes will be supported by public institutions, government officials and corporations. Principles of privacy, free speech and responsible anonymity would be explored in the Magna Carta scheme.

NASA Released Shocking Photos Of Planet Earth Revealing The Heartless Damage We've Caused! I was looking at these photos and I was reminded of a scene from “The Matrix” where agent Smith tells Neo that humanity is a virus to this planet. I don’t want to believe that. I think we all have a choice. You have bacteria in your gut that helps you digest food and live. businessinsider Over the past 30 years, three-quarters of eastern US tree species have been shifting to the west, and at an astonishing rate of around 15.4 kilometres per decade (9.5 miles). That's weird, because scientists have long predicted that the effects of climate change would send species towards the poles in search of familiar climates, but since 1980, more eastern trees have been moving west instead of north. And at this stage, it's not entirely clear why. And the fact that more eastern trees are moving westward than northward isn't even the strangest part.

What did that ‘NASA-funded collapse study’ really say? Ian Angus examines a widely reported study that supposedly proves that only equality and a shift to renewables can prevent the collapse of western civilization. by Ian Angus If hundreds of newspaper and online reports are to be believed, scientists at NASA’s Goddard Space Agency have proven that western civilization will collapse unless we radically reduce inequality and shift to renewable resources. That would be important news if it were true. Is it? The first person to say so was Nafeez Ahmed, a self-described “investigative journalist and international security scholar” whose blog is hosted by the UK Guardian. What will blow our minds in the *next* 30 years? Predictions are a mug’s game. If they come true, you likely didn’t push your thinking hard enough. If they don’t come true, you risk looking like an idiot. Nonetheless, many speakers at the annual TED conference have taken the plunge and proffered thoughts of what the future might look like. The video above takes a quick spin through just some of them, with thoughts from tech pioneers including Nicholas Negroponte, Rodney Brooks, Jeff Han and Pattie Maes. Below, we asked many of the attendees and speakers at this year’s just-wrapped TED to riff off the conference’s theme (“The Next Chapter”) and tell us what they think might radically change society, life, technology and so on in the *next* 30 years.

Bureaucracy, Autocracy and Neoliberal Canada (Photo: Fibonacci Blue / Flickr)We must not only intervene, resist and oppose neoliberal governments and corporate capitalist hegemony; we must finally put an end to these death-dealing institutions. One cannot reflect upon the notion of human adaptability without experiencing both a sense of awe and a feeling of increasing uneasiness. We are awed when science tells us that one of the most powerful evolutionary intellectual capacities we possess is the ability to adapt to challenging and unforeseen situations and environments. We adjust to extremities of weather, the loss of loved ones, constantly changing technologies and shifting social, economic and political circumstances - not always quickly or faultlessly, but inevitably, given time. In the same moment of reflection, we can experience apprehension when we sense that we have become habituated to things that are contrary to our individual or communal interests: systemic injustices, intolerant, racist or sexist attitudes.

Unbelievable Photos Show Factory Farms Destroying The American Countryside By Harrison Jacobs / businessinsider.com/ Nov 11, 2014 Food production has become a race for maximum efficiency. When it comes to producing meat, whether chicken, beef, or pork, that race has fallen at the feet of the so-called factory farm and its hallmark feature — the feedlot. Organic Farming is Bad for the Environment Marketing sometimes involves the science of making you believe something that is not true, with the specific goal of selling you something (a product, service, or even ideology). The organic lobby, for example, has done a great job of creating a health halo and environmentally friendly halo for organic produce, while simultaneously demonizing their competition (recently focusing on GMOs). These claims are all demonstrably wrong, however.

Olduvai Theory: Sliding Towards a Post-Industrial Stone Age, by Richard Duncan click here Indeed, the ability to control energy, whether it be making wood fires or building power plants, is a prerequisite for civilization. -- Isaac Asimov, 1991 In 1989, I concluded that the life-expectancy of Industrial Civilization is horridly short. This hypothesis was defined in terms of a measurable index, world energy-use per person, and named the "transient-pulse theory of Industrial Civilization." I sketched its maximum point at 1990, followed by a persistent decline (see Note 1). Back then, however, I had no data to support this claim. What Did We Learn in State of the Future Report? March 23, 2014 - Last week I reported on the imminent release of The Millennium Project's State of the Future 2014. The Millennium Project has been around since 1996 and serves as a central clearing house for ideas about the future from 3,500 contributors whose backgrounds include academics, government, business, NGOs and think tanks. The 2014 State of the Future represents a distillation of current thoughts. What are they? The outlook for the next decade is more positive than negative based on an analysis of 30 factors, among them, health, freedom, education, environment and wealth. The report summarizes the 15 global challenges in a diagram which I have reproduced here.