Autonome/context. The Original Magazine of the Linux Community. How to Build a Wireless Pi Camera Pan and Tilt Platform - Tuts+ Computer Skills Tutorial. With the release of the Raspberry Pi camera module, taking high quality pictures, or video, with the Pi has become very simple. 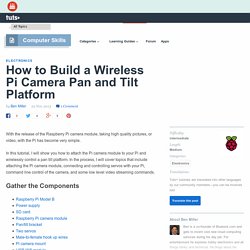 In this tutorial, I will show you how to attach the Pi camera module to your Pi and wirelessly control a pan tilt platform. In the process, I will cover topics that include attaching the Pi camera module, connecting and controlling servos with your Pi, command line control of the camera, and some low level video streaming commands. Set up and assemble the basic Pi components with the following steps. The creation of the modern laptop. The world's first commercial laptop—though that is certainly stretching the term—was the Osborne 1. 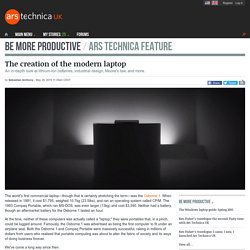 When released in 1981, it cost $1,795, weighed 10.7kg (23.5lbs), and ran an operating system called CP/M. The 1983 Compaq Portable, which ran MS-DOS, was even larger (13kg) and cost $3,590. Neither had a battery, though an aftermarket battery for the Osborne 1 lasted an hour. At the time, neither of these computers was actually called a "laptop;" they were portables that, in a pinch, could be lugged around. Famously, the Osborne 1 was advertised as being the first computer to fit under an airplane seat. We've come a long way since then. Pick up your laptop. Okay, you can put your laptop back down. All of that, though, is nothing without a battery. Don't stick a fork in me or I'll explode Originally commercialised by Sony in 1991, lithium-ion batteries now power just about every consumer-oriented portable device.

Solid-state batteries. Algorithms of the Mind — Deep Learning 101. “Science often follows technology, because inventions give us new ways to think about the world and new phenomena in need of explanation.”

Or so Aram Harrow, an MIT physics professor, counter-intuitively argues in “Why now is the right time to study quantum computing”. He suggests that the scientific idea of entropy could not really be conceived until steam engine technology necessitated understanding of thermodynamics. Quantum computing similarly arose from attempts to simulate quantum mechanics on ordinary computers. So what does all this have to do with machine learning? Much like steam engines, machine learning is a technology intended to solve specific classes of problems. Not Computer Vision, But Computer Imagination Five years ago, deep learning pioneer Geoff Hinton (then at the University of Toronto, now at Google) published the following demo. Hinton had trained a five-layer neural network to recognize handwritten digits when given their bitmapped images.

On Concepts and Intuitions. Control your friends using the power of Neuroscience (Remote Control Human Part II) In this Instructable we'll use a Mindwave Mobile EEG (electroencephalogram) unit, a trusty Arduino UNO, a TENS (Transcutaneous Electrical Nerve Stimulation) unit, and a simple relay to remotely control a human minion with our minds! 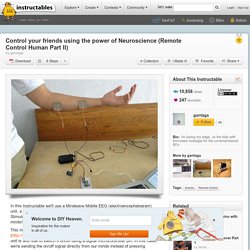 This Instructable scaffolds on the skills learned in the Remote Controlled Human ( Please review that project to get familiar with what a TENS unit is and how to switch it on/off using a digital microcontroller pin. In this case, we're sending the on/off signal directly from our minds instead of pressing buttons on a smartphone. No more pesky finger movements needed to rule the world! This whole apparatus works because of the way brain cells generate and send signals to each other and to muscles. Neurons are constantly exchanging ions with the extracellular milieu to maintain resting potential and to propagate action potentials that act as messages to other cells.

How to Build and Tune an Open Source 3D Printer on Linux. The RepRapPro Ormerod is a recent addition to the Reprap line of 3D printers that uses open source software to drive open hardware. 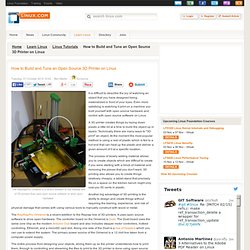 It is difficult to describe the joy of watching an object that you have designed being materialized in front of your eyes. Even more satisfying is watching it print on a machine you built yourself with open source hardware and control with open source software on Linux. A 3D printer creates things by laying down plastic a little bit at a time to build the object up in layers. Technically there are many ways to "3D print" an object. At the moment the most popular method is using a reel of plastic which is fed to a hot end that can heat up the plastic and deliver a given amount of it at a specific location. Another big advantage of 3D printing is the ability to design and create things without requiring the training, experience, and risk of physical damage that comes with using various tools to manually construct with wood or metal.