Watch This Russian Tank Defend Itself From An Anti-Tank Rocket In The Most Epic Way Possible. Russian Typhoon-Class Submarine Size: The Biggest Subs Ever. Georges DeKeerleGetty Images Russia’s Typhoon-class submarines were true Cold War leviathans.The missile-firing submarines were designed to operate in the Arctic under pack ice.A typical Typhoon was more than 1.5 times longer than a football field and three times as tall as the average American house. 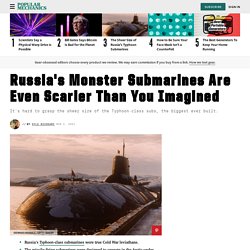 If you’ve ever seen The Hunt for Red October, you’re probably familiar with Russia’s truly massive Typhoon-class submarines. These Cold War giants still stand as the largest subs ever built. Just how big are we talking? Each u-boat stretched to nearly 600 feet long and was wider than the average American house—and almost three times as tall, to boot. In the 1970s, the Soviet Union embarked upon a new nuclear weapons program (code name: Typhoon) to develop a new missile-firing submarine and nuclear missiles. H.I. The Typhoon-class submarines displaced 23,200 tons in order to accommodate a payload of 20 RSM-52 ballistic missiles. 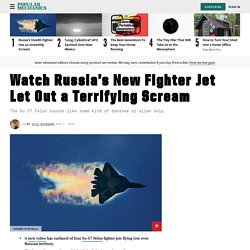 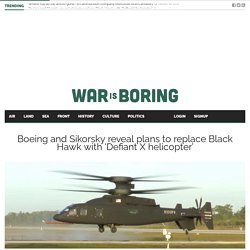 Burke Stars and Stripes Jan. 27—Boeing Co. and Sikorsky unveiled their plan Monday to replace the aging fleet of UH-60 Black Hawk helicopters as the Army’s long-range assault aircraft of the future. The joint team’s Defiant X helicopter is capable of flying low and fast to bring troops where needed while evading adversaries over complex terrain, according to the Boeing website. The Army is expected to call for final submissions to its Future Long Range Assault Aircraft competition later this year and may award contracts in 2022, according to a Boeing statement Monday. Navy Littoral Combat Ship Problems: Freedom-Class LCS Defects. The U.S. 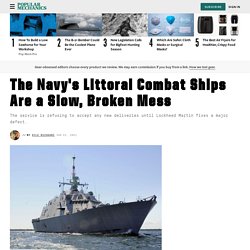 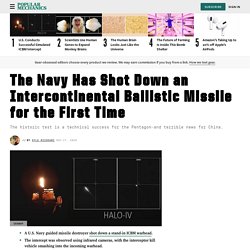 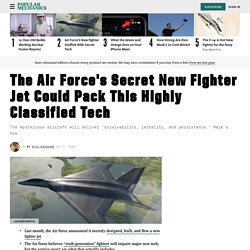 In September, the U.S. Air Force shocked the world when it announced it had secretly designed, built, and tested a new fighter jet—all in the astonishingly short span of just one year. The secret new fighter jet—if it's even a new "fighter" at all—is part of the Next Generation Air Dominance (NGAD) program, an Air Force project designed to supplement and eventually replace the F-22 Raptor. The Air Force has identified five major new technologies it believes will be necessary for the program.

Navy Developing America's New Fighter Jet: 6th Generation Fighter. The Navy wants a new fighter jet to replace Super Hornets starting in the 2030s.The new fighter will be crewed and have a longer range than the F-35.The Navy, faced with declining budgets through the 2020s and a short development cycle, may turn to a familiar face to get a “new jet” quickly. 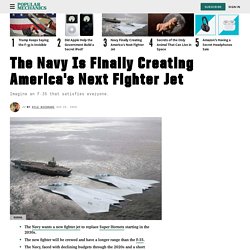 The U.S. The Last 'Spooky' Gunship Heads to the Boneyard. U.S. 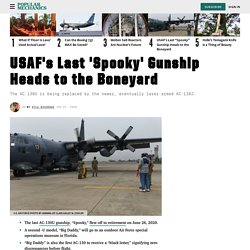 Lockheed Martin/Sikorsksy The SB-1 Defiant technology demonstrator aircraft reached a speed of 230 miles an hour, making it faster than the Army’s UH-60 Black Hawk.The Defiant is one of two aircraft that will compete to replace the Army’s Black Hawk and Apache helicopters.The Defiant will likely fly even faster in the near future, with speeds greater than 300 miles an hour projected. 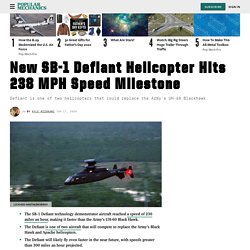 A new helicopter and candidate to replace the Army’s fleet of assault transport helicopters reached a key speed milestone. The Sikorsky-Boeing SB-1 Defiant helicopter reached 205 knots, or 238 miles an hour. The Defiant is one of two contenders to replace the Black Hawk, using an unorthodox rotor configuration to speed soldiers across the battlefield faster than ever before. The test flight took place on June 9 at Sikorsky’s West Palm Beach Development Flight Test Center.

Non-explosive missile that uses sword blades to shred its targets is seen up close for the first time. It is by far the most terrifying of all the AGM-114 Hellfire missile series- at least if you’re driving in an unarmored vehicle, that is. 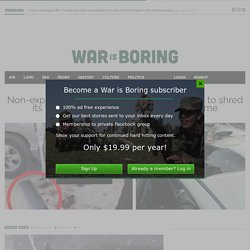 Known as the AGM-144R9X, the missile has no large blast radius, but can still dismember a vehicle full of bad guys with ease. Utilizing a series of pop-out blades, the R9X is something out of nightmarish horror films, slicing through opponents as it strikes with deadly precision. While the method seems rather gruesome, the ends justify the means in this case- by utilizing the blades instead of a large warhead, the R9X can cut down on collateral damage (pun intended) in confined urban areas. The R9X is another example of how years of fighting the War on Terror has led the US to come up with ways to spare civilians, while still being able to take out high-level targets that choose to hide among the innocent.

The Army has officially fielded its new squad designated marksman rifle. While Sig Sauer prepares to rake in more money with US Army contracts for small arms, Heckler & Koch are delivering the first batch of HK417 Squad Designated Marksman Rifles. The awards, which were issued by the US Army in 2019 and 2020 to deliver 5,851 SDMRs, with deliveries expected to continue into mid-2021. While the Army has been handing out sample-sized numbers of the rifle since 2018, the mass-issue of the HK417 marks an exciting time for designated marksmen in Army divisions all over the world. According to Task & Purpose, the rifles were delivered to the 1st Armored Brigade Combat Team of the 3rd Infantry Division, and were shipped from H&K’s Georgia facility. The HK417s will replace the Knight’s Armament M110 Squad Designated Marksman Rifle, which many Soldiers claim had mediocre performance and was somewhat finicky under austere conditions.

A Demonstration Of How Powerful 17th-Century Ship Cannons Were. The U-boat Wars 1939-1945 (Kriegsmarine) and 1914-1918 (Kaiserliche Marine) and Allied Warships of WWII - uboat.net. What the U.S. Commandos 'Armed Overwatch' Plane Might Look Like. U.S. Air Force Photo by Ethan D. Wagner U.S. Special Operations Command wants to purchase up to 75 planes capable of both reconnaissance and strike missions.At the same time, the U.S. Air Force is canceling plans to buy up to 300 light attack planes.

How Combat Tree Made the F-4 Phantom II the Deadliest Fighter Over Vietnam in the 1970s – The Tactical Air Network. "Two U.S. Air Force McDonnell F-4D-30-MC Phantom II fighters (s/n 66-7576, 66-7628) from the 435th Tactical Fighter Squadron, 8th Tactical Fighter Wing, over Vietnam, off the wing of a Boeing KC-135A Stratotanker. F-4D 66-7576 was written off in Vietnam on 30 July 1972. " (USAF photograph/released) Imagine, as a fighter pilot, being able to see your enemy without them knowing you’re even in the area. This Mini-Sub Is Like a Commuter Bus for Navy SEAL Commandos.

F-16 - Fighter Jets - Advanced Precision Kill Weapon System. U.S. Satellite Photos Reveal Gigantic Chinese Fleet of More Than 40 Ships. A fleet of private satellites recently picked up an extraordinary sight in the middle of the South China Sea: a parade of more than 40 warships of the Chinese People’s Liberation Army Navy sailing in formation. The exercise was likely meant as a show of force to China’s neighbors, many of whom contest the country’s territorial claims. Air Force Planes - Tonopah Nevada - Air Force Test Site. Special Operations Command Is Experimenting With Bullets That Shoot Through Water. Watch a Real-Life Invisibility Cloak Designed for Military Use. Iran Unveils New Tank-Killing Ground Drones. Iran introduced new unmanned 6x6 ground drones.The armed drones are primitive but could be used to kill tanks and armored vehicles.Although invented by Iran, they will probably escape into the wild and eventually fall into the hands of groups that Iran supports throughout the Middle East.

This Formula Predicts Soldier Firepower in 2050. Drawing trend lines across seven centuries suggests that tomorrow’s troops will rock some seriously heavy gear. In 2050, exoskeleton-equipped soldiers could carry the sorts of heavy machine guns that are today mounted on vehicles, while tanks could be armed with howitzer-class cannons, according to a mathematical formula derived from seven centuries of weapons development. To build the formula, Army Research Laboratory scientist Alexander Kott carefully scrutinized the performance attributes of weapons across the years, starting with crossbows and proceeding through muskets and tanks. Hypersonic Missiles Are Unstoppable. And They’re Starting a New Global Arms Race. Air Force conducts successful hypersonic weapon flight test. By Secretary of the Air Force Public Affairs / Published June 13, 2019 ARLINGTON, Va. Combat robot with over-the-horizon control put through its paces in live-fire exercise.

A Glimpse At How the F-35 Will Help the Marines Storm the Beach. BAE Systems takes a cue from ironclad beetle to build self-repairing military suspensions. Did the Navy Steal Its New Warship Designs? The F-35B Just Got A Lot Deadlier. The USS Zumwalt Can't Fire Its Guns Because the Ammo Is Too Expensive. Can the Navy’s Electric Cannon Be Saved? US Navy takes possession of its largest ever destroyer. US Navy announces sea trials for electromagnetic railgun. The Army Has a Deadly Machine-Gun-Firing Shipping Container.

Boeing unveils game-changing autonomous submarine. Milrem combat robot brings modular versatility to the battlefield. Russia's Radical Sukhoi S-37 Fighter Plane Goes Up Against Our F-22. The U.K. Will Attack ISIS With a Missile the U.S. Could Only Dream Of. US Army tests drone-killing 50 mm cannon. How Syria is becoming a test bed for high-tech weapons of electronic warfare. US Army tests remote controlled weapon towers. South Korea's autonomous robot gun turrets: deadly from kilometers away. XM25 Prototypes in testing – 500% lethality increase over existing weapon systems. US Military's Hypersonic Jet Could Fly 5 Times the Speed of Sound. West 2014: Joint Strike Fighter: What Do the Pilots Who Are Flying It Today Have to Say?