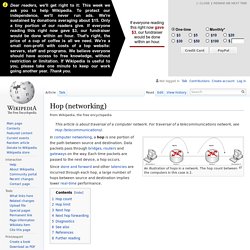 The hop count between the computers in this case is 2. The hop count refers to the number of intermediate devices (like routers) through which data must pass between source and destination, rather than flowing directly over a single wire.[1] Each router along the data path constitutes a hop, as the data is moved from one Layer 3 network to another. Hop count is therefore a basic measurement of distance in a network. Each time a capable device receives these packets, that device modifies the packet, incrementing the hop count by one. In addition, the device compares the hop count against a time to live limit and discards the packet if its hop count is too high. Known as time to live (TTL) in IPv4, and "Hop Limit" in IPv6, this field specifies a limit on the number of hops a packet is allowed before being discarded. Routing term used for the next gateway to which packets should be forwarded along the path to their final destination.

Time to live. IP packets[edit] DNS records[edit] TTLs also occur in the Domain Name System (DNS), where they are set by an authoritative name server for a particular resource record. 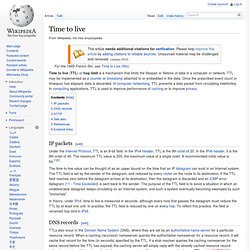 When a caching (recursive) nameserver queries the authoritative nameserver for a resource record, it will cache that record for the time (in seconds) specified by the TTL. If a stub resolver queries the caching nameserver for the same record before the TTL has expired, the caching server will simply reply with the already cached resource record rather than retrieve it from the authoritative nameserver again. Nameservers may also have a TTL set for NXDOMAIN (acknowledgment that a domain does not exist); but they are generally short in duration (three hours at most). The units used are seconds. Newer DNS methods that are part of a DR (Disaster Recovery) system may have some records deliberately set extremely low on TTL. 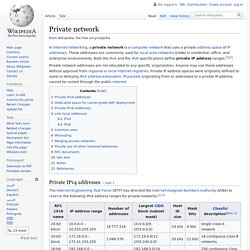 These addresses are commonly used for home, office, and enterprise local area networks (LANs). Private IP address spaces were originally defined in an effort to delay IPv4 address exhaustion, but they are also a feature of IPv6. Addresses in the private space are not allocated to any specific organization and anyone may use these addresses without approval from a regional Internet registry. However, IP packets addressed from them cannot be transmitted through the public Internet, and so if such a private network needs to connect to the Internet, it must do so via a network address translator (NAT) gateway, or a proxy server. 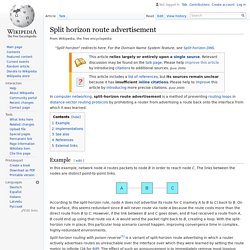 For the Domain Name System feature, see Split-horizon DNS. In computer networking, split-horizon route advertisement is a method of preventing routing loops in distance-vector routing protocols by prohibiting a router from advertising a route back onto the interface from which it was learned. Example[edit] In this example, network node A routes packets to node B in order to reach node C. The links between the nodes are distinct point-to-point links. According to the split-horizon rule, node A does not advertise its route for C (namely A to B to C) back to B. Link-state advertisement. The link-state advertisement (LSA) is a basic communication means of the OSPF routing protocol for the Internet Protocol (IP). 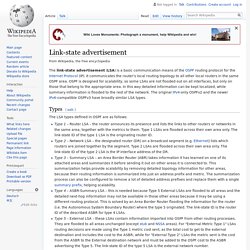 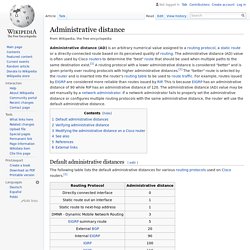 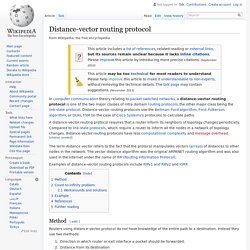 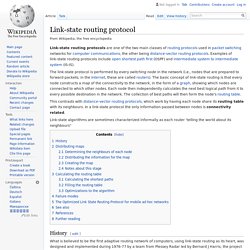 Examples of link-state routing protocols include open shortest path first (OSPF) and intermediate system to intermediate system (IS-IS). This contrasts with distance-vector routing protocols, which work by having each node share its routing table with its neighbours. In a link-state protocol the only information passed between nodes is connectivity related. Link-state algorithms are sometimes characterized informally as each router 'telling the world about its neighbours" History[edit] What is believed to be the first adaptive routing network of computers, using link-state routing as its heart, was designed and implemented during 1976-77 by a team from Plessey Radar led by Bernard J Harris; the project was for "Wavell" - a system of computer command and control for the British Army.