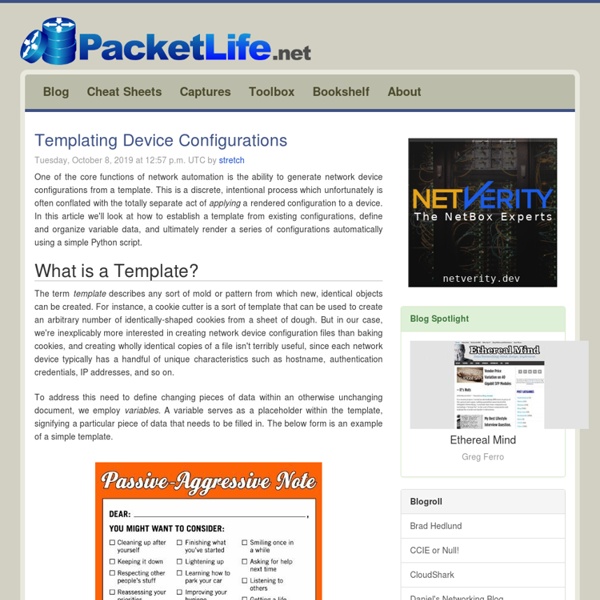 Regular readers no doubt have noticed that I haven't posted anything new in the past few months. I've been pretty busy with the holidays, home projects, and adjusting to a new job, and haven't had much time or motivation to devote to writing. Good news though: I have started on a long-overdue refresh of the Packet Life design and code base. When I originally debuted Packet Life, I ultimately wanted it to serve as major community hub, so I built in features like the wiki and discussion forum. Although Packet Life has grown quite popular over the last few years, these areas of the site have seen little activity. Acknowledging that there are more active and useful sites out there which serve these functions, I've decided to chop off some of the bloat in favor of focusing on the blog and the site's other more popular features.

301 Moved Permanently Posted by Brenon Daly on September 9, 2015 Contact: Brenon Daly In both August 2015 and August 2011, concerns about slowing global economies knocked stock markets around the world into a tailspin, while also ratcheting up volatility. Intuitively, we would assume that both conditions, which introduce more variance and uncertainty, would make it more difficult to do deals.

OpenDNS From DD-WRT Wiki OpenDNS is a free DNS (Domain Name Server) service which makes internet browsing safer and allegedly faster. By simply using their DNS servers instead of your ISP's you are automatically protected from their list of Phishing websites. However, in order to restrict a variety of adult website content you will need to create a free account with them, register your IP address and select the categories you want restricted (i.e. sexuality, nude, pornography, lingerie, grotesque, etc...). Packet Captures Showing 1 - 25 of 166 nf9-juniper-vmx.pcapng.cap 912 bytes Submitted Dec 10, 2016 by Jb93 To Tell the Truth: Multihop FCoE In the old television show, “To Tell The Truth,” celebrity panelists would attempt to decipher the true identity of one of three people, two of which were imposters. Sure, they looked alike, sounded alike, and had very similar characteristics, but there was only one genuine article. As we move deeper into the capabilities of FCoE, it’s now starting to become obvious that people are starting to become more sophisticated about what happens beyond the first switch.

Quick Subnetting (Good for exams) Simple SubnettingBy: Robert H. Williams III compTIA A+\Net+, Microsoft MCP\MCSA\MCSE (2000), Cisco CCNA What this document is about: This document will cover two quick ways for figuring out the numbers behind subnetting. The first way involves making a simple chart, the second way uses simple math that most people can do in their head, at least for smaller numbers. The first way is recommended for any exams, or times when you need to do a lot of subnetting quickly. Webtorials Please note: By downloading this information, you acknowledge that the sponsor(s) of this information may contact you, providing that they give you the option of opting out of further communications from them concerning this information. Also, by your downloading this information, you agree that the information is for your personal use only and that this information may not be retransmitted to others or reposted on another web site. Please encourage colleagues to download their own copy after registering at Continuing past this point indicates your acceptance of our terms of use as specified at Terms of Use.

Recovery From Corrupt or Missing Software Image on Cisco Catalyst 2900XL and 3500XL Series Switches Introduction This document describes how to recover from a corrupt or missing software image on the Cisco Catalyst 2900XL and 3500XL Series Switches. When this problem exists, the error message error loading flash appears when you boot up after power loss or after an incorrect software upgrade. Note: Trivial File Transfer Protocol (TFTP) may be used to transfer software image files from a PC to your device. This document was written using output from the Cisco TFTP server application. Cisco has discontinued this application and no longer supports it.

Subnetwork Creating a subnet by dividing the host identifier A subnetwork, or subnet, is a logical, visible subdivision of an IP network.[1] The practice of dividing a network into two or more networks is called subnetting. The routing prefix is expressed in CIDR notation. It is written as the first address of a network, followed by a slash character (/), and ending with the bit-length of the prefix. Cisco Cert Zone Closing the Cisco Cert Zone (for Now) So Long Submitted by wendell on Thu, 01/12/12 - 1:55pm. Authenticating Linux against Active Directory If you are planning to use a Linux workstation in a Windows Network, one of the things you probably want to do is authenticate against the Windows Domain name server (s), i.e. Active Directory. Authenticating Linux against Active Directory One thing to keep in mind is that – even when signed on in active directory - it doesn't offer a complete single sign on – yet. You will still have to provide a user name and password if using a windows based proxy server such as ISA server.

FREE Cisco Courses - CCNA Cisco has created the certification process to give administrators a set of skills and to equip prospective employers with a way to measure skills or match certain criteria. Becoming a Cisco Certified can be a crucial step of a successful journey toward a new, highly rewarding and sustainable career. In example, the CCNA program was created to provide a solid introduction not only to the Cisco Internetwork Operating System (IOS) and Cisco hardware, but also to internetworking in general, making it helpful to you in areas that are not exclusively Cisco's. During the years the CCNA certification evolve and now there are lowest levels of certification but the CCNA level is the first important and well recognizable step. Currently there are eight different tracks in the Associate level based on the different technologies.