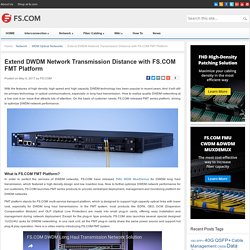 And it will still be primary technology in optical communications, especially in long haul transmission. How to realize quality DWDM networking at a low cost is an issue that attracts lots of attention. On the basis of customer needs, FS.COM released FMT series platform, aiming to optimize DWDM network performance. What Is FS.COM FMT Platform? In order to perfect the services of DWDM networks, FS.COM have released FMU WDM Mux/Demux for DWDM long haul transmission, which featured a high density design and low insertion loss. FMT platform stands for FS.COM multi-service transport platform, which is designed to support high-capacity optical links with lower cost, especially for DWDM long haul transmissions. PoE in Enterprise Network - Tutorials Of Fiber Optic Products. In traditional data communication network, a network connection and a power connection are required. 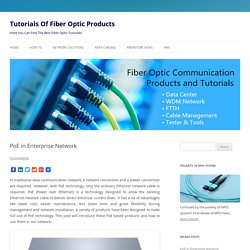 However, with PoE technology, only the ordinary Ethernet network cable is required. PoE (Power over Ethernet) is a technology designed to allow the existing Ethernet network cable to deliver direct electrical current flows. It has a lot of advantages like lower cost, easier maintenance, less down time and great flexibility during management and network installation. A variety of products have been designed to make full use of PoE technology.

This post will introduce these PoE based products and how to use them in our network. PoE switch is the most important device is you are going to use PoE technology. In many public places or even our own houses, camera is installed for surveillance These cameras are usually required to be connected to the Ethernet or monitor. WiFi is necessary in most places now. Network Making Full Use of PoE technology. How to Achieve DWDM Over CWDM. Posted on November 29, 2016 by FS.COM Tags: CWDM , DWDM WDM network, which is divided into CWDM (coarse wavelength division multiplexing) network and DWDM (dense wavelength division multiplexing) network, is commonly used in our optical communication networks like FTTH. 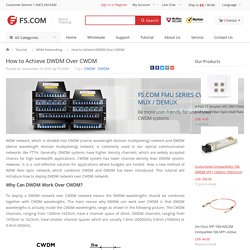 Generally, DWDM systems have higher density channels, which are widely accepted choices for high bandwidth applications. CWDM system has lower channel density than DWDM system. However, it is a cost-effective solution for applications where budgets are limited. Why Can DWDM Work Over CWDM? To deploy a DWDM network over CWDM network means the DWDM wavelengths should be combined together with CWDM wavelengths. DWDM Active Systems With EDFAs & DCMs. 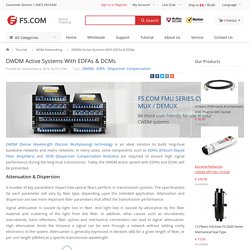 In many cases, some components such as EDFAs (Erbium-Doped Fiber Amplifiers) and DCM (Dispersion Compensation Modules) are required to ensure high signal performance during the long-hual transmission. Today, the DWDM active system with EDFAs and DCMs will be presented. Attenuation & Dispersion A number of key parameters impact how optical fibers perform in transmission systems. Signal attenuation is caused by light loss in fiber. Dispersion limits the bandwidth or information carrying capacity of a fiber. DWDM Active Systems With EDFAs & DCMs It is precisely because attenuation and dispersion limit the transmission performance. 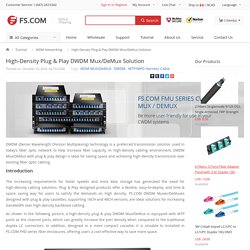