Shangri-La. Our intrepid explorers have done it again! 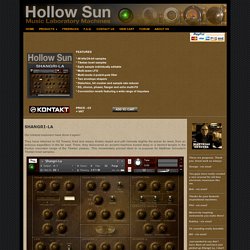 They have returned to HS Towers, tired and weary, khakis ripped and pith helmets slightly the worse for wear, from an arduous expedition in the far east. There, they discovered an ancient machine buried deep in a derelict temple in the Kunlun mountain range of the Tibetan plateau. This immediately proved ideal to re-purpose for Matthias Schuster's Tibetan bowl samples. With 61 different bowl samples of varying kinds and sizes and made of copper and bronze, there is a remarkable amount of tonality in their own right. However, each one is individually editable with each sample able to be tuned and EQ's and filtered by the multi-mode filter and shaped by two envelopes as well as modulated by an LFO and and envelope.

With chorus, phase shifting, flanging, echo and convolved reverb with a wide range of impulses, the effects complete the processing to transform the raw samples. CP70 Electric Grand. In its heyday, the Electric Grand was regarded as an instrument in its own right and not just a portable alternative to a real piano for live use and many artists used them in the studio in place of (or as well as) acoustic pianos. 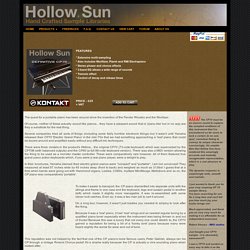 Often this was for convenience (plugging in a cable is a lot easier than mic'ing up an acoustic piano) but often, it was used for its unique sound. Of course, with the advent of high quality digital pianos (many from Yamaha themselves!) , the CP series became increasingly redundant both live and in the studio and it was eventually discontinued in the mid-'80s.

However, the Yamaha Electric Grands remain today as classic and innovative instruments with a classic 'sound'. It has been used in the past by the aforementioned Peter Gabriel and also Abba, U2, Simple Minds, George Duke, Bruce Hornsby, Genesis/Tony Banks and countless others. Several other landmark electric pianos such as Wurli EP200, Pianet and the RMI ElectraPiano are also included in the package. Hammond Novachord. The Novachord character always shines through. 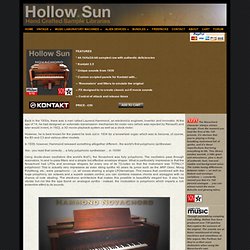 From the moment you load the first of the 120 presets, it’s obvious that you’re playing a living, breathing instrument full of quirks, and it’s these imperfections that bring everything to life. This library exudes warmth, a little grain and wheeziness, plus a dash of authentic hum, low-end rumble and background noise. The subtle tuning differences between notes — as well as timbral and envelope variations — constantly remind you that it’s 100 percent analogue ... you can almost smell the warm Bakelite and glowing tubes. Through painstaking sampling and editing, Hollow Sun have produced over 130 patches that capture the essence of the original. The sounds are at times reminiscent of string machines and sometimes of 60s organs like Farfisas but they're at their most distinctive when using the Novachord's own electromagnetic vibrato. 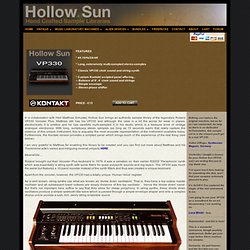 Matthias still has his VP330 and although the case is a bit the worse for wear in places, electronically it is pristine and he has carefully multi-sampled it in his studio which is a treasure trove of vintage analogue electronics. With long, sumptuous stereo samples (as long as 15 seconds each) that really capture the essence of this unique instrument, this is arguably the most accurate representation of the instrument available today. Furthermore, the Kontakt version provides a scripted panel which brings much of the experience of the real thing (see below). I am very grateful to Matthias for enabling this library to be created and you can find out more about Matthias and his Thereminist wife's varied and intriguing musical projects HERE Meanwhile....

Roland brought out their Vocoder Plus keyboard in 1979. Two models were made – a MkI and MkII. vKS70. vKS70 Several decades ago (1985 to be precise), a certain Japanese manufacturer released their JX8P which did ok. 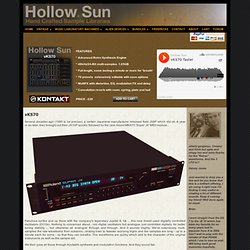 A year or so later, they brought out their JX10P quickly followed by the rack mount MKS70 'Super JX' MIDI module... Fabulous synths and up there with the company's legendary Jupiter 8. Ok ... this new breed used digitally controlled oscillators (DCOs). Nothing to concerned about - not digital oscillators but analogue just controlled digitally for better tuning stability ... but otherwise all analogue through and through. We then pass all those through Kontakt's synthesis and modulation functions. Unforunately, these synths were parameter access (as was the fashion back in the 80s) and they were bastards to program.

It connected via a six-pin DIN cable and allowed hands-on tweaking and fiddling and was (is) fabulous. We've emulated this in the PG800's GUI... We've also added multiple LFOs.