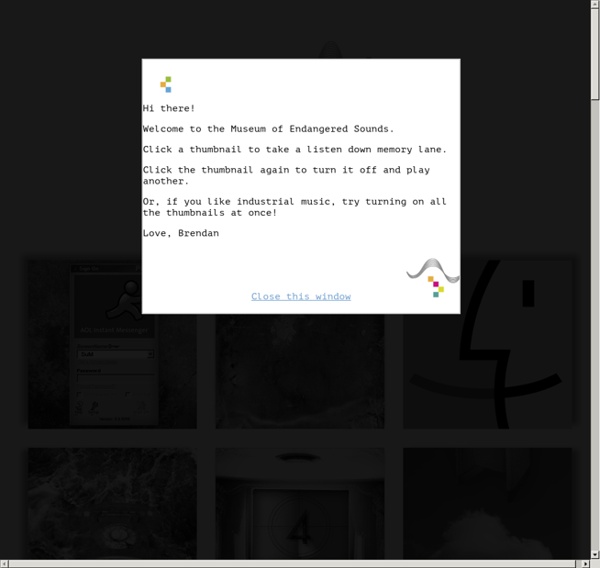 Photos: 50+ years of Japanese concept cars Here is a selection of concept cars designed by Japanese automakers from 1957-2009. Toyota Proto, 1957 Toyota Publica Sports, 1962 Nissan Prince Sprint 1900 Prototype, 1963 Sounds of the sea: Listening online to the ocean floor By Rhitu Chatterjee and Rob Hugh-Jones PRI's The World "The cable is going underneath here," says Benoit Pirenne, standing at the water's edge on Canada's Vancouver Island. "It's going out 500 miles (800km) in a big loop in the ocean, coming back in the same place."

Chercheurs de sons Custom UV Transformation Nodes for Cycles Non-Uniform Transformations Have you ever wanted to just move, scale, or rotate just part of a texture within cycles render nodes, or twist a texture about an axis? Or have you ever wanted to control several texture transformations with a single parameter? Believe it or not, Cycles’ nodes allow us to do this! Vintage Posters of Major Online Brands It’s needless to say that vintage style is almost a 100% winning idea for any project. It always looks interesting and eye-catching so you may be sure that applying retro ideas will make your concept popular. But today we’re offering you to take a look at the vintage posters of famous web brands that don’t need any extra advertising – these companies are well-known all over the world. Every Noise at Once deep symphonic black metal progressive uplifting trance vintage french electronic deep indie singer-songwriter underground latin hip hop

Rigging/Auto custom shape From BlenderWiki Introduction Interface This script is meant to save some time and to facilitate the design of bones custom shapes. You can activate this script via File → User Preferences → Add-Ons → Rigging. Once activated, a panel will appear at the bottom of the bone properties panel with a single button. The history of PC hardware, in pictures We all use personal computers and we all take them for granted in our everyday lives. It’s easy to forget that PCs have only been around for a couple of decades, and initially were nowhere near the powerhouses we have on our desks today. For example, did you know that the first “portable” computer weighed 25 kg (55 lb) and cost close to $20,000, that the first laser printer was big enough to fill up most of a room, or that you basically had to build the first Apple computer yourself? This article takes a look at the time when the computer equipment we now take for granted was invented and what it looked like back then. The first computer mouse The first computer mouse was invented in 1963 by Douglas Engelbart at the Stanford Research Institute.

Scanning WWII: The Arnett Institute's WWII Scanning Project Documents from World War II in the National Archives are in grave peril and are literally turning to dust! Most of the paper used during the war years was heavily acid based, and time is taking its toll. Documents from previous eras, World War I or even the Civil War, will outlast those from World War II. Congress has mandated that the entire National Archives be digitized, but with millions upon millions of records, they cannot do so without some big-time private sector help. We, the Arnett Institute, have stepped forward to assist in this mammoth project of scanning the WWII documents in the National Archives to prevent these important records from being lost for all time. To become an official partner of the National Archives so we can assist in scanning their WWII documents, we have to accomplish the following...

Must-see Historical Photos That Make You Stop And Think... Sometimes, one simple picture can tell you more about history than any story you might read or any document you might analyze. 1. First selfie, ca. 1920: 2. Animals being used as part of medical therapy, 1956: 3. 64 Historical Pictures you most likely haven’t seen before. # 8 is a bit disturbing! These photographs all tell stories about the historical figures or events that they represent. Once taken simply to document their present, they now help us witness the past Many photographs only become iconic shots years later, once we understand their importance and historical context. s Best Photos of fiat and viotti Flickr Hive Mind is a search engine as well as an experiment in the power of Folksonomies. All thumbnail images come directly from Flickr, none are stored on Flickr Hive Mind. These photos are bound by the copyright and license of their owners, the thumbnail links take to you to the photos (as well as their copyright and license details) within Flickr.

50 Inspiring Vintage Advertisements Like many others I find myself captivated with vintage advertising. There have been numerous articles, blog posts and websites dedicated to the subject and I just can’t seem to get enough. Specifically, it is the advertising of the 50′s and 60′s that is most aesthetically pleasing to me.