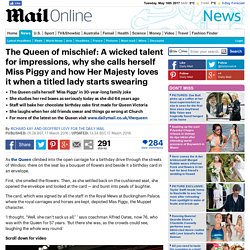 First, she smelled the flowers. Then, as she settled back on the cushioned seat, she opened the envelope and looked at the card — and burst into peals of laughter. The card, which was signed by all the staff in the Royal Mews at Buckingham Palace, where the royal carriages and horses are kept, depicted Miss Piggy, the Muppet character. Tasty - Prime Rib with Garlic Herb Butter FULL RECIPE:... Tastee Recipe This Pineapple Delight Dessert Is Something To Smile About! - Page 2 of 2 - Tastee Recipe. This pineapple delight is truly delightful! 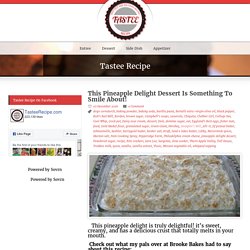 It’s sweet, creamy, and has a delicious crust that totally melts in your mouth. Check out what my pals over at Brooke Bakes had to say about this recipe: If you’re a pineapple lover like me then you’ll love this dessert. The combination of the graham cracker crust, the creamy buttery filling, and the fluffy, pineapple-studded whipped cream is seriously amazing. Quick Vanilla Buttercream Frosting Recipe. Hot Milk Cake Recipe. Er’s Day High Tea recipes. Best Health Magazine Canada. Recipes. The Country Cook: 3-Ingredient Lemon Crumble Bars. Strawberry Pretzel Salad. This post was originally published on August 27, 2008. 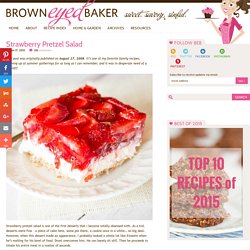 It’s one of my favorite family recipes, showing up at summer gatherings for as long as I can remember, and it was in desperate need of a facelift! Strawberry pretzel salad is one of the first desserts that I became totally obsessed with. As a kid, desserts were fine – a piece of cake here, some pie there, a cookie once in a while… no big deal. However, when this dessert made an appearance, I probably looked a whole lot like Einstein when he’s waiting for his bowl of food. Drool overcomes him.

My great aunt and my grandma would take turns bringing this to any family get together that occurred during the spring or summer, and it often made an appearance at Easter. Ambrosia Salad Recipe. Don’t you sometimes wish that crystal balls were real? 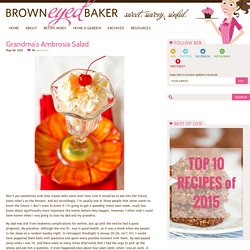 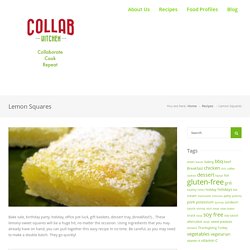 … These lemony-sweet squares will be a huge hit, no matter the occasion. Using ingredients that you may already have on hand, you can pull together this easy recipe in no time. Be careful, as you may need to make a double batch. They go quickly! Ingredients 1 cup all-purpose flour 1/4 cup confectioners' sugar 1/2 cup butter, room temperature 2 eggs 1 cup granulated sugar 1/2 teaspoon baking powder 1/4 teaspoon kosher salt 2 tablespoons lemon juice, freshly squeezed 1 tablespoon lemon zest, from 2 to 3 lemons Confectioners' sugar, for dusting Instructions Preheat oven to 350 degrees F. Orange Chocolate Delights (aka Florentines) – Collab Kitchen. A good friend of ours, @iMatty on Twitter, fell in love with these delicious treats a few years back around Christmas, and he loved them so that he named them the “orange chocolate delights” (aka Florentines). 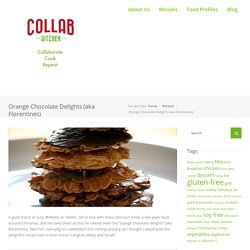 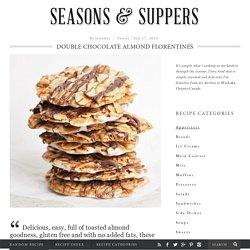 Today I’m presenting a recipe I didn’t cook! (shades of that recent Masterchef episode, for those who are watching :). In this case though, I didn’t “accidentally” pick up someone else’s baking. I simply talked my daughter into baking them. Grasshopper Mint Chocolate Bark. I have been head-over-heels in love with chocolate bark since I discovered peppermint bark five or six years ago. 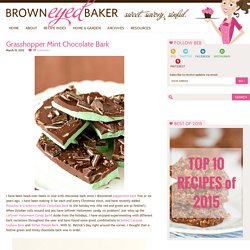 I have been making it for each and every Christmas since, and have recently added Pistachio & Cranberry White Chocolate Bark to the holiday mix (the red and green are so festive!). When October rolls around and you have leftover Halloween candy, no problem! Just whip up the Leftover Halloween Candy Bark! Aside from the holidays, I have enjoyed experimenting with different bark variations throughout the year and have found some great combinations in Salted Caramel Cashew Bark and Toffee Pretzel Bark. With St. Strawberry Pretzel Salad. Ambrosia Salad Recipe. No-Bake Banana Split Cake Dessert. Banana Spilt Cake. - Resepi Sheila Rusly. Pinterest. Blender Milk Bread. Hamburger Steak with Onions and Gravy Recipe. Tip Hero - Cheesy Bacon Dip. A TASTE OF BRITAIN: Yorkshire Pudding, Parkin and Pomfret Cakes. A TASTE OF YORKSHIRE: Pudding, Parkin and Pomfret Cakes by Dawn Copeman Do you fancy a Toad in the Hole followed by some Fat Rascals? 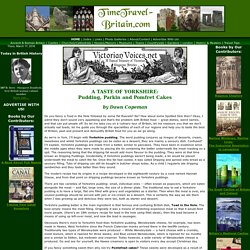 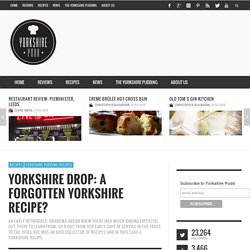 An early networker, Grandma Abson knew there was much baking expertise out there to learn from, so right from her early days in service in the 1900s to the 1970s, she was an avid collector of recipes and in this case a Yorkshire recipe. The Bread. Whenever I have a friend or family member over for dinner, they will ask the following question: “Are you making The Bread?” And I always smile and say: “Yes. I am making The Bread.” I smile because it’s a foregone conclusion that I will be making The Bread.

I smile because The Bread is so darn delicious and no one who tastes it can believe it contains only two ingredients. Indian Fry Bread and Indian Tacos. For today’s State Fair Recipe, I’m going to show you how to make Indian Fry Bread, a Native American quick bread that’s fried and served either on its own, drizzled with honey, sprinkled with cinnamon sugar, or topped with ground beef and other taco ingredients. In the second part of the post, I’m going to go ahead and show you what the fry bread looks like as a base for Indian Tacos. However, the fry bread in the Indian Taco photos is not the right fry bread.

It’s the wrong fry bread. Cheesy Pierogi Lasagna – 12 Tomatoes. Proper 12T 12tomatoes_belowtitle If you’ve ever had classic pierogi (and even if you haven’t) you’ll be blown away by our pierogi lasagna. Now THIS Is an Easy and Impressive Side to Serve on Christmas. Jamie Oliver Want to branch out and try something new for the holidays? Why not try a satisfying side dish that’s straight out of A Christmas Carol! We’re talking about Yorkshire pudding, and don’t let the name full you— this puffed baked good isn’t a dessert. Instead, it’s the perfect vehicle for everything from gravy to smoked salmon, and for impressing everybody. Vintage Recipes. Vintage Recipes. Chronically Vintage: Vintage recipes. Farm Families of Mississippi.

RECIPES FROM THE 1940s!!! 1960s recipes - Hey, my mom used to make that! Now you know that in a pinch you can substitute Campbell's Tomato Soup for pizza sauce. A 1960s Cocktail Party. Last week, while the snow fell wildly in New York, we turned back the clocks inside and celebrated Christmas like we imagined some might have decades ago. Inspired by a few of my recent vintage cookbook acquisitions and the season finale of Mad Men, I decided to throw a Christmas party that takes place just after the show left us: in December 1963. 1980s recipes - Hey, my mom used to make that!