What happened in my birth year? 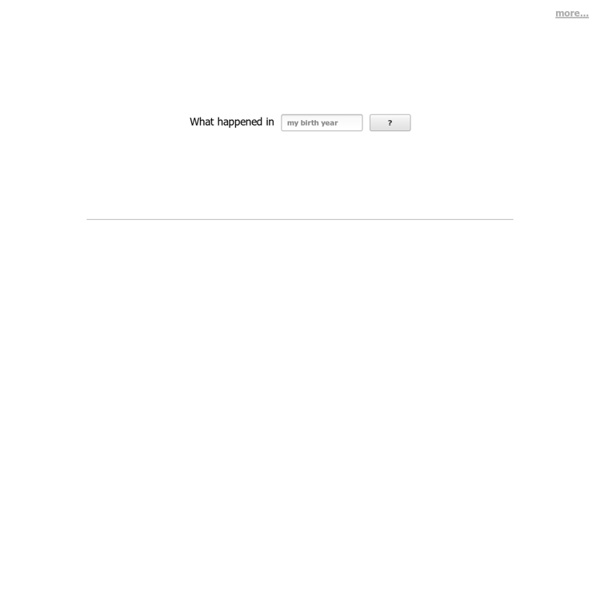 DIY Skylights From Used Water Bottles Replace 50-Watt Bulbs Image via YouTube video An ingenious invention by an engineer in Brazil has made an enormous difference in his town. Simply placing a bottle of water in a hole in the ceiling can light up a room with the same brightness as a 50-watt light bulb! Residents have better lighting and are using less electricity. Psychic Tests You are here: Psychic Tests The following are psychic tests and games designed to measure your degree of psychic abilities (or spiritual gifts) or to be used as tools to develop your psychic talents. However, these tests will not provide you the ultimate answer about whether if you're psychic or not, so please, don't send us emails about the results, since some are rather subjective. If you're psychic (more than your average person, that is), you should know it.

Thérésa Tallien Thérésa Cabarrus, Madame Tallien (31 July 1773 – 15 January 1835), was a French social figure during the Revolution. Later she became Princess of Chimay. Life[edit] Early life[edit] Your Daily Life in GIFs (1.23.12) Good news, everyone…Your Daily Life in GIFs has been upgraded to WEEKLY STATUS! Yep, so come back every Monday for even more totally relatable moments… (also: if you want to share a specific one, just click the image and you’ll be taken to a single-pic page) When your favorite TV series ends:

The OSTRICH Story A man walks into a restaurant with a full-grown ostrich behind him. The waitress asks them for their orders. The man says, "A hamburger, fries and a coke," and turns to the ostrich, "What's yours?" Synapse Bike - Cycle Concept by Sylvain Gerber Hubless Bike I’ve seen a handful of hubless concept bikes but the Synapse Bike goes one further with integrated electric motors to assist the rider. The design opens up the entire bike, giving the designer control over structural elements (in this case, lack thereof). It’s minimal, elegant, slightly aggressive, but overall dynamic.

Soul Type Quiz from "The Instruction: Live the Life Your Soul Intended " by Ainslie MacLeod (Publisher: Sounds True) Caregiver The quintessential characteristic of a Caregiver type is the desire to take care of others. For this reason, Caregivers may be drawn to the long-term care of children or the elderly.