My Little Pony: Friendship is Magic

Luna watches the Princess Celestia video. You'll Be In My Heart-phil collins. My Little Pony - Friendship is Magic Discord's break-out. You Raise The Sun (You Raise Me Up cover/parody) Apple Bloom - but, I want it now. Diario Equestria: MLP:fim S2 E1- The return of harmony part 1. My Little Pony: Friendship is Magic - Season 2, Episode 1 - The Return of Harmony. Everyday I'm Discordin' MLP:FiM S02E01 720p.

The Pony Swag Megamix. Learn Like Twilight Sparkle. My little pony- Italian Opening. YOUR FACE ! My Little Pony: Friendship is Magic Season 2 Opening Theme Song. Everyday im discordin' Bronytoons - Luna's Lament. [MLP:FiM] Applesheen is WINNING. Team Fortress 2 - Sandviches! YouTube Repeat! Rule 422. The Girl Who Lost the Stars. Simba will rule the chaos capital of the world. Your Face! Extended [UnanimousDelivers] OptiBrony Strikes Back!!! (A TF:Prime/MLP Crossover) Pinkie Pie is Invincible but then Runs Out of Feathers but then Breaks the 4th Wall and Finds More. 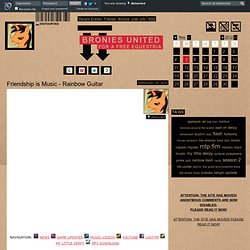 APPLE.MOV. PONIES The Anthology. My Little Pony: Friendship is Magic Season 2 Episode 3 - Lesson Zero (1080P) This video will make your heart explode. Final revision > My Funny Sister. Scootaloo puttered about town on her scooter, as usual, snaking through market stalls, wagons, and pedestrians. 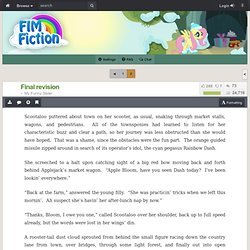 All of the townsponies had learned to listen for her characteristic buzz and clear a path, so her journey was less obstructed than she would have hoped. That was a shame, since the obstacles were the fun part. The orange guided missile zipped around in search of its operator’s idol, the cyan pegasus Rainbow Dash.

She screeched to a halt upon catching sight of a big red bow moving back and forth behind Applejack’s market wagon. “Apple Bloom, have you seen Dash today? “Back at the farm,” answered the young filly. “Thanks, Bloom, I owe you one,” called Scootaloo over her shoulder, back up to full speed already, but the words were lost in her wings’ din. A rooster-tail dust cloud sprouted from behind the small figure racing down the country lane from town, over bridges, through some light forest, and finally out into open farmland.