« All friendships of any length are based on a continued, mutual forgiveness. Without tolerance and mercy all friendships die. » David Whyte

Six Signs of a Strong Friendship. These Are The 8 Friends You Need To Be Happy In Life. 3 Questions to Ask Yourself About Every Friendship. Reclaiming Friendship: A Visual Taxonomy of Platonic Relationships to Counter the Commodification of the Word “Friend” Friendship, C.S. Lewis believed, “like philosophy, like art, like the universe itself … has no survival value; rather it is one of those things which give value to survival.”

But the poetic beauty of this sentiment crumbles into untruth for anyone who has ever been buoyed from the pit of despair by the unrelenting kindness of a friend, or whose joys have been amplified by a friend’s warm willingness to bear witness. I often puzzle over the nature, structure, and function of friendship in human life — a function I have found to be indispensable to my own spiritual survival and, I suspect, to that of most human beings. But during a recent interview on Think Again, I found myself concerned with the commodification of the word “friend” in our culture. In countering this conflation, I was reminded of philosopher Amelie Rorty’s fantastic 1976 taxonomy of the levels of personhood and wondered what a similar taxonomy of interpersonhood might look like.

The Obligatory Friend. Can you grow out of friendships? 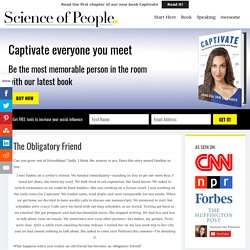 Sadly, I think the answer is yes. Does this story sound familiar to you: I met Sophie on a writer’s retreat. We bonded immediately—standing in line to get our room keys. I loved her shoes, she loved my scarf. What happens when you realize an old friend has become an obligatory friend? Obligatory Friend: n Someone you don’t enjoy spending time with, but end up spending time with because you feel guilty, it’s a habit or you do not know how to stop.

This doesn’t usually happen over night. Obligatory Friend Warning Signs: There are warning signs… Overtime you grow apartYour interests have gotten more and more differentYou are less alike than you originally thoughtYou no longer work together / are on the same sports team / go to the same organizationYou have become different people than you were when you were youngerYou have nothing in common anymoreYou no longer live nearby This most commonly happens with: Here’s my big idea: …and this is not a bad thing. Stop. 8 Signs of a Toxic Friendship. Steinbeck and the Difficult Art of the Friend Breakup. “A friend,” wrote the poet and philosopher John O’Donohue in his beautiful meditation on the Ancient Celtic notion of anam cara, “awakens your life in order to free the wild possibilities within you.”

But what happens when a friendship ceases to magnify your spirit and instead demands that you be a smaller version of yourself? 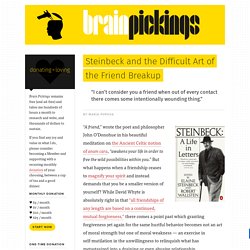 While David Whyte is absolutely right in that “all friendships of any length are based on a continued, mutual forgiveness,” there comes a point past which granting forgiveness yet again for the same hurtful behavior becomes not an act of moral strength but one of moral weakness — an exercise in self-mutilation in the unwillingness to relinquish what has metastasized into a draining or even abusive relationship. That’s what John Steinbeck (February 27, 1902–December 20, 1968) confronted in his mid-thirties as his friendship with George Albee, another young writer, grew increasingly strained by Albee’s professional jealousy.

Unpleasant thing. Solitude. Complementarity. Reciprocity. How To Make Friends As An Adult: 5 Secrets Backed By Research. Before we commence with the festivities, I wanted to thank everyone for helping my first book become a Wall Street Journal bestseller. To check it out, click here. When you were a kid it was a lot easier. In college you almost had to be trying not to make friends. But then you’re an adult. You get busy with work. You’re not alone… Or, actually, the whole point of this is you really may be alone. Via Social: Why Our Brains Are Wired to Connect: In a survey given in 1985, people were asked to list their friends in response to the question “Over the last six months, who are the people with whom you discussed matters important to you?” Friends are important. So let’s see just how critical friends can be — and the scientifically backed ways to get more of them in your life… Loneliness Is A Killer When people are dying, what do they regret the most?

How to Move a Relationship out of the Friend Zone. How Friendship Turns Into Romance. The Joy (and Benefits) of Renewing Old Friendships.