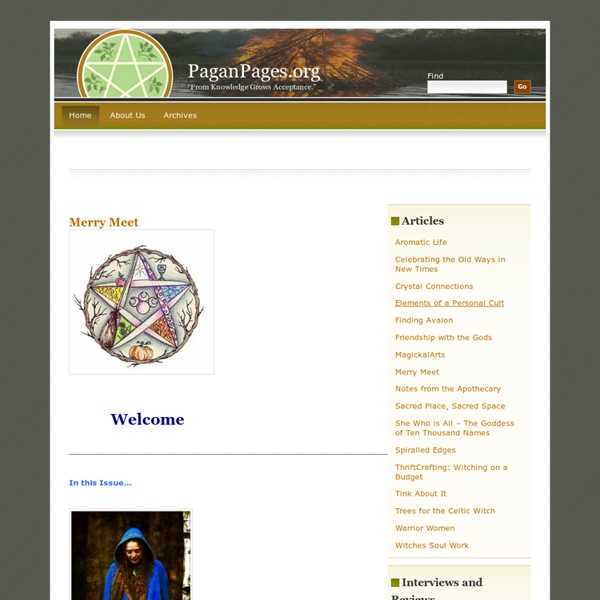 Wicca Online Community For Pagans and Wiccans Witches' Voice Inc. - 22 March, 2014 - 7:14:44 PM Magickal Wicca Wonderland Moving Beyond Religion I am an old man now. I was born in 1935 in a small village in northeastern Tibet. For reasons beyond my control, I have lived most of my adult life as a stateless refugee in India, which has been my second home for over fifty years. I often joke that I am India’s longest-staying guest. In common with other people of my age, I have witnessed many of the dramatic events that have shaped the world we live in. Looking back over the past decades, I find many reasons to rejoice. At the same time, despite tremendous advances in so many fields, there is still great suffering, and humanity continues to face enormous difficulties and problems. These problems are not limited to the developing world. It is clear that something is seriously lacking in the way we humans are going about things. This is the spiritual principle from which all other positive inner values emerge. My intention is not to dictate moral values. Adapted from Beyond Religion, by His Holiness the Dalai Lama.

Welcome to the Book of Shadows - The Book of Shadows Friendly Atheist — You can be skeptical and friendly at the same time. Alberta Officials Reject Proposed Catholic Sex Ed Lessons That “Deny Science” Alberta officials deserve praise for this strong stance against harmful misinformation. Read more Gordon Klingenschmitt: “The Church Should Take Over the Government” Gordon Klingenschmitt, the former Colorado State Rep. who eventually lost his seat in part because of his theocratic fantasies, is at it again. Read more Duck Dynasty Dad Wrongly Says Crime and Murder Rates Soar in Areas Without God Phil Robertson shows us that saying you’re religious means you can lie about anything. Linda Harvey: My Childhood Ouija Board Saved Me From Homosexual Halloween This Christian activist knew Halloween was evil when she was 14 and an Ouija board told her all about it. Alt Med Advocates Are Wrong to Say Doctors Don’t Treat the Whole Patient Modern medicine isn’t perfect. Atheists Sue TX School Officials for Harassing Student Who Sat During Pledge

Paganism & Wicca - Pagan and Wiccan Religion Locus Online: Magazine: 2014 Locus Poll and Survey Locus Poll and Survey Here is the online version of the 43rd annual Locus Awards ballot, covering works that appeared in 2013. In each category, you may vote for up to five works or nominees, ranking them 1 (first place) through 5 (fifth). As always, we have seeded the ballot with options based on our 2013 Recommended Reading List [this link will open a new window], mainly because this greatly facilitates tallying of results. However, again as always, you are welcome to use the write-in boxes to vote for other titles and nominees in any category. If you do, please try to supply author, title, and place of publication, in a format like the options listed, where appropriate. Do not vote for more than one item in a category at the same rank (e.g. two selections ranked 1st); if you do, we will disregard your votes in that category. As in previous years, voting rules count subscriber votes double. Anonymous ballots will not be counted. -- This form is now inactive -- Locus Poll Best SF Novel other: