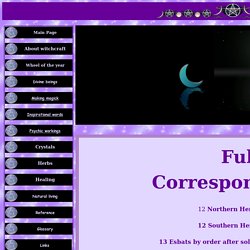 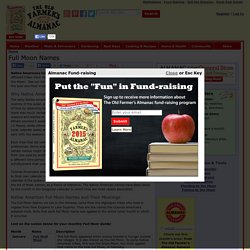 Think of it as a "nickname" for the Moon! See our list of other full Moon names for each month of the year and their meanings. Why Native Americans Named the Moons The early Native Americans did not record time by using the months of the Julian or Gregorian calendar. Many tribes kept track of time by observing the seasons and lunar months, although there was much variability. Each tribe that did name the full Moons (and/or lunar months) had its own naming preferences. Colonial Americans adopted some of the Native American full Moon names and applied them to their own calendar system (primarily Julian, and later, Gregorian). Native American Full Moon Names and Their Meanings The Full Moon Names we use in the Almanac come from the Algonquin tribes who lived in regions from New England to Lake Superior. Link on the names below for your monthly Full Moon Guide!

Elements and star signs. Fly to the moon fairy goddess. Dark Moon. I am the dark Goddess, I am Hecate I am the Darkness behind and Beneath the Shadows I am the absence of air that waits at the bottom of every breath I am the Ending before Life begins again. 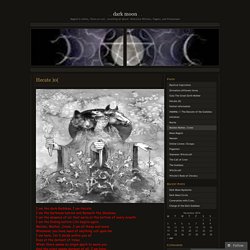 Maiden, Mother, Crone…I am all these and more. Whenever you have need of anything call upon me. I am here…for I abide within you all Even at the darkest of times When there seems no single spark to warm you And the night seems darkest of all, I am here… Watching and waiting to grow within you In strength and in love. Come to me and see that which cannot be seen, Face the terror that is yours alone. Swim to me through the blackest oceans To the center of your greatest fears– The Dark God and I will keep you safe. Hecate and Her History Hecate is a threefold Moon Goddess connected with the feminine independence from the masculine. Hecate is skilled in the arts of divining and foretelling the future. Hecate’s name derives from the Egyptian midwife-Goddess Heqit, Heket, or Hekat.

Www.hecatescauldron.org. New moon magic. Science, Magic and the Moon. All information contained herein is written by and the property of Lynn Hayes. 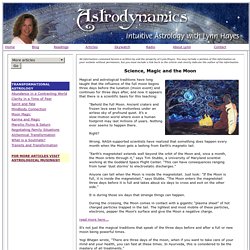 You may include a portion of this information on your website without permission, but you must include a link back to the article and clearly indicate the author of the information. Astrological Energies of the New Moon. When the Moon is new, the Luminaries -- the Sun and Moon -- are aligned in the same Zodiac sign. 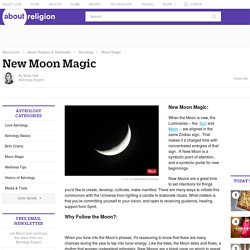 That makes it a charged time with concentrated energies of that sign. A New Moon is a symbolic point of attention, and a symbolic portal for new beginnings. New Moons are a great time to set intentions for things you'd like to create, develop, cultivate, make manifest. There are many ways to initiate this communion with the Universe from lighting a candle to elaborate rituals. What matters is that you're committing yourself to your vision, and open to receiving guidance, healing, support from Spirit. Why Follow the Moon? When you tune into the Moon's phases, it's reassuring to know that there are many chances during the year to tap into lunar energy. In the chaotic and temporal world, looking to something larger that is also part of yourself can fill you with awe and make you feel connected. February - Storm Moon - A Witch In Time. Seasonal Moon Meanings. When we first posted about our Seasonal Moon Necklaces, we had a lot of requests to post about what each seasonal moon meant. 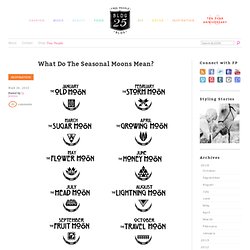 So, with that a mind we thought it would be a good idea to describe to you each one. Storm Moon. March rolls in like the proverbial lion, and if we're really lucky, it might go out like a lamb. 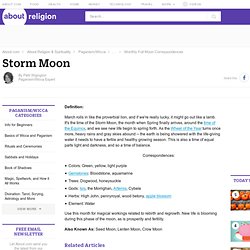 It's the time of the Storm Moon, the month when Spring finally arrives, around the time of the Equinox, and we see new life begin to spring forth. As the Wheel of the Year turns once more, heavy rains and gray skies abound -- the earth is being showered with the life-giving water it needs to have a fertile and healthy growing season. This is also a time of equal parts light and darkness, and so a time of balance.