An Empath’s Guidebook to Emotional Stability. Highly empathetic people have high sensitivity and this sensitivity can manifest into undesirable circumstances. 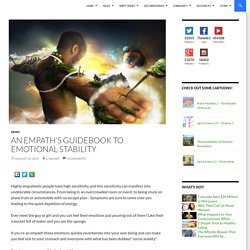 From being in an overcrowded room or event, to being stuck on plane train or automobile with no escape plan– Symptoms are sure to come over you leading to the quick depletion of energy. Ever meet the guy or girl and you can feel their emotions just pouring out of them? Like their a bucket full of water and you are the sponge. If you’re an empath these emotions quickly reverberate into your own being and can make you feel sick to your stomach and overcome with what has been dubbed “social anxiety”. So what can we empath’s do about it? Sure its great to be able to sense the emotional frequency and thoughts of others hey– thoughts and emotions are intentions and are held on the 4th dimension. Here is a quick guidebook for when you get yourself into those situations. 1. Then visualize the person’s energy being separate from your own.

Why Do We Dream - Solving Problems During Sleep. BOSTON – The slumbering mind might not seem like an apt tool for any critical thinking, but humans can actually solve problems while asleep, researchers say. 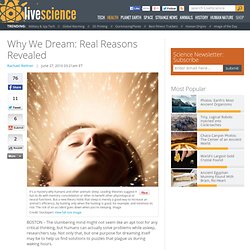 Not only that, but one purpose for dreaming itself may be to help us find solutions to puzzles that plague us during waking hours. Dreams are highly visual and often illogical in nature, which makes them ripe for the type of "out-of-the-box" thinking that some problem-solving requires, said Deirdre Barrett, a psychologist at Harvard University. Reality Check: Is Our Universe Real? Perhaps our human senses are deceiving us — maybe existence is an illusion, and reality isn't real. 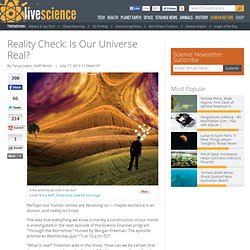 The idea that everything we know is merely a construction of our minds is investigated in the next episode of the Science Channel program "Through the Wormhole," hosted by Morgan Freeman. The episode premieres Wednesday (July 17) at 10 p.m. EDT. "What is real? " Freeman asks in the show. Human senses are fallible. But this filtering ability can become a weakness, as it often does when we're watching a magician.

"A good magician will tap into universal brain processes that underlie perception," said Lawrence Rosenblum, a psychologist at the University of California, Riverside and a magician himself. But Rosenblum doesn't see the human tendency to fall for such misdirection as evidence that all of reality exists only in our minds. All in the mind As members of society, people create a form of collective reality. Money is fiction, but it's useful fiction. Physical reality. 7 Thoughts That Are Bad For You. Our personalities do more for us than determine our social circles. 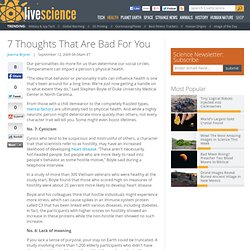 Temperament can impact a person's physical health. "The idea that behavior or personality traits can influence health is one that's been around for a long time. We're just now getting a handle on to what extent they do," said Stephen Boyle of Duke University Medical Center in North Carolina. From those with a chill demeanor to the completely frazzled types, mental factors are ultimately tied to physical health. And while a highly neurotic person might deteriorate more quickly than others, not every character trait will kill you. No. 7: Cynicism Cynics who tend to be suspicious and mistrustful of others, a character trait that scientists refer to as hostility, may have an increased likelihood of developing heart disease. In a study of more than 300 Vietnam veterans who were healthy at the study start, Boyle found that those who scored high on measures of hostility were about 25 percent more likely to develop heart disease.

Black Magic Revealed in Two Ancient Curses. At a time when black magic was relatively common, two curses involving snakes were cast, one targeting a senator and the other an animal doctor, says a Spanish researcher who has just deciphered the 1,600-year-old curses. 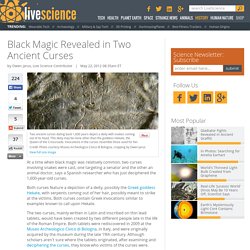 Both curses feature a depiction of a deity, possibly the Greek goddess Hekate, with serpents coming out of her hair, possibly meant to strike at the victims. Both curses contain Greek invocations similar to examples known to call upon Hekate. The two curses, mainly written in Latin and inscribed on thin lead tablets, would have been created by two different people late in the life of the Roman Empire. Both tablets were rediscovered in 2009 at the Museo Archeologico Civico di Bologna, in Italy, and were originally acquired by the museum during the late 19th century. Although scholars aren't sure where the tablets originated, after examining and deciphering the curses, they know who victims of the curses were.

Kill the pig May all his limbs dissolve … Study Reveals How Magic Works. Scientists are figuring out how magicians fool our brains in research that also helps uncover how our mind actually works. 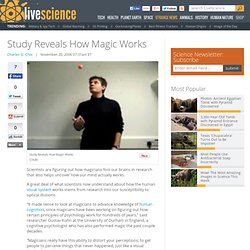 A great deal of what scientists now understand about how the human visual system works stems from research into our susceptibility to optical illusions. "It made sense to look at magicians to advance knowledge of human cognition, since magicians have been working on figuring out how certain principles of psychology work for hundreds of years," said researcher Gustav Kuhn at the University of Durham in England, a cognitive psychologist who has also performed magic the past couple decades.

"Magicians really have this ability to distort your perceptions, to get people to perceive things that never happened, just like a visual illusion," he added. The researchers looked into a magic trick called the "vanishing ball," in which a ball apparently disappears in midair. It's done by faking a throw while keeping the ball secretly palmed in the magician's hand.