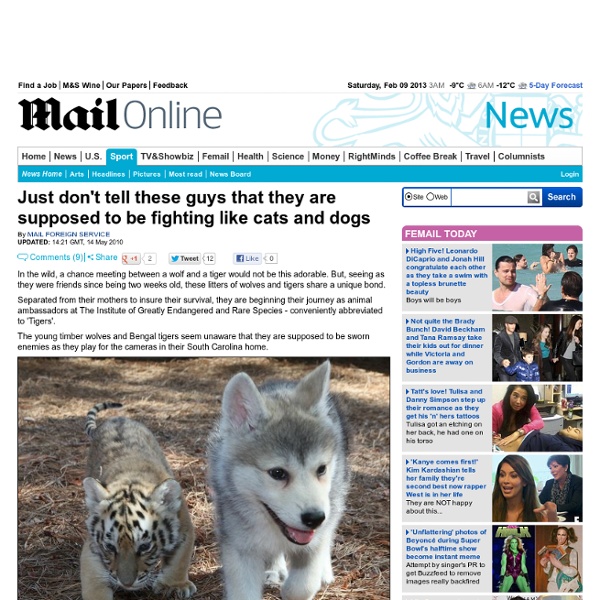 By Mail Foreign Service Updated: 14:21 GMT, 14 May 2010 In the wild, a chance meeting between a wolf and a tiger would not be this adorable. But, seeing as they were friends since being two weeks old, these litters of wolves and tigers share a unique bond. Separated from their mothers to insure their survival, they are beginning their journey as animal ambassadors at The Institute of Greatly Endangered and Rare Species - conveniently abbreviated to 'Tigers'. The young timber wolves and Bengal tigers seem unaware that they are supposed to be sworn enemies as they play for the cameras in their South Carolina home. On the prowl: Wolf and Tiger cubs play together at Myrtle Beach South Carolina Zoo. Now aged three months, and sharing the same bottles of milk formula, the 25lb wolf cubs are twice the weight of their tiger bedfellows. The founder of Tigers, Doc Bhagavan, said: 'At the moment the tigers will have a size and weight disadvantage to their canine friends. Related:  Tigers • Emphaty & Friendship

The BIG cat who likes getting wet and wild by MICHAEL HANLON Last updated at 11:46 29 May 2007 Most cats do not like getting wet - as anyone who has tried to bathe a moggie will know. But as these pictures show, there's always the exception to the rule. Six years old, and at the prime of his life, Odin lives at the Six Flags Discovery Kingdom Zoo in Vallejo, near San Francisco. Scroll down for more White tigers - the colour is caused by an unusual genetic combination - are rare in the wild, although there are several dozen in zoos. Odin was hand-raised at the zoo. In fact, although Big Cats generally do not like water, tigers of all types have been spotted taking to the water to hunt and even to bathe for pleasure. Odin can now be observed in action - a large pool with glass walls has been constructed at the zoo to allow visitors to watch him gliding through the water with all the grace of a polar bear. Tragically, within our lifetimes, zoos might be the only places left to see these magnificent animals.

Ethiopian Wolf The Ethiopian wolf (Canis simensis) is a canid native to the Ethiopian Highlands. It is similar to the coyote in size and build, and is distinguished by its long and narrow skull, and its red and white fur.[3] Unlike most large canids, which are widespread, generalist feeders, the Ethiopian wolf is a highly specialised feeder of Afroalpine rodents with very specific habitat requirements.[4] It is the world's rarest canid, and Africa's most endangered carnivore.[5] The Ethiopian wolf is listed as Endangered by the IUCN, on account of its small numbers and fragmented range. Naming[edit] Alternative English names for the Ethiopian wolf include Abyssinian wolf, Simien fox, Simien jackal, Ethiopian jackal, red fox, red jackal,[6] Abyssinian dog[7] and cuberow.[8] Indigenous names[edit] Historical account[edit] The earliest written reference to the species comes from the 13th century Aberdeen Bestiary:[5][10] Rüppell's depiction of the species (1835). Taxonomy and evolution[edit] Subspecies[edit]

A Heartwarming Story Of The 15-Year Friendship Between A Lion, Tiger And Bear Many of us are taught from a young age that the fundamental feeling of love has no boundaries. We try to keep that ideology close to our hearts as we grow and make friends. In the wild, different species cohabitate land, but the majority stick to their kind. Even in the domestic world, we see the confusion, curiosity, and often times fear a new type of animal inflicts on another. I have this book called Unlikely Friendships, and whenever I flip through the pages and read the stories behind the animals’ incredible bonds, I am reminded of the power of love. The following story is about Baloo the bear, Leo the lion, and Shere Khan the tiger, who have spent the last 15 years cohabitating peacefully in Noah’s Ark Animal Shelter in Georgia. Images: Bored Panda The BLT, from three different continents, would have never known each other in the wild. Because they were too injured to be rehabilitated and returned to the wild, they live happily in Noah’s Ark Animal Shelter in Georgia.

I love cheese A tiger at Six Flags Discovery Kingdom Park Tigers love water and will readily jump in to kill their preyAt a Californian nature park, a trainer threw meat into a pool to demonstrate the tiger's agilityA photographer captured on film the tiger's quick dash and dive By Alex Ward Published: 11:43 GMT, 17 July 2012 | Updated: 11:43 GMT, 17 July 2012 This hungry tiger has just one thing on his mind - to taste fresh meat. He was quick to leap into water, his jaws open wide, razor-sharp teeth gleaming to reach the chunk of raw meat. Capturing the action on film at Six Flags Discovery Kingdom Park in Vellejo, California was professional photographer Juan Leon, from Walnut Creek, California. Diving for dinner: Tigers will swim to get food and this feline showed how it's done after a park trainer threw meat into a pool Raw meat ravage: Photographer Juan Leon saw the 'perfect moment to take a picture' while sitting infront of the crystal wall looking into the pool ‘I thought "this is the perfect moment to take the picture" and it was!’

Dog Adopts Orphaned Opossums, Takes Them For Rides On Her Back Last month, tragedy struck a group of helpless baby opossums when, sadly, their mother was attacked and killed on a property in Brazil. Fortunately, someone discovered the orphaned offspring, their eyes still not yet open, and gave them to pet behaviorist Stephanie Maldonado for safekeeping. Initially, Maldonado had hoped to take the baby opossums to a nearby wildlife rescue group, but was told that they were too full to accept any newcomers. So, she took it upon herself to keep them cozy and fed. The animals required feeding every two hours, but it was still uncertain if the opossums would survive without more motherly attention than Maldonado could provide. That's when her dog, Pretinha, stepped in. Perhaps most incredibly though, the dog is more than happy to embrace her adopted litter's un-puppylike instinct to climb atop their mom.Source

Best places to spot tigers in India Wanna see a real wild tiger? Head to India, where nearly half of the world's remaining wild tiger population roams. The country's 1,400 big cats are spread over more than 40 national parks in the country. To help increase the odds of spotting a tiger in India, we've narrowed your choices down to five places where it's most likely you'll get a good sighting. Very big cats: tigers can weigh up to 300 kilos. Bandhavgarh National Park: Greatest chance of spotting a tiger Bandhavgarh National Park is a wildlife sanctuary in Madhya Pradesh. The core area of the park is spread over 100 square kilometers and is home to more than 50 tigers. The park is known as the land of the white tiger, even though white tigers no longer exist here. Other animals in the park include chital deer, sambar deer, barking deer, wild boar, nilgai antelope, four-horned antelope, Indian Bison, wild dog, leopard, blue bull, Indian fox and bear. www.bandhavgarhnationalpark.com Rates start from Rs 2,030. "How are my whiskers?"

He Watched Helplessly As A Wild Wolf Approached His Dog. Then Something Incredible Happened. Despite their incredible beauty and obvious similarities to our domestic companions, just about everyone knows that wolves are not to be messed with in any way. But in 2003, Alaskan wildlife photographer Nick Jans and his labrador encountered a wolf in their backyard – and began a relationship that would defy logic and transform an entire community. Jans was on the back porch of his Juneau home with his dog when a wild wolf appeared. Nick was stunned to see the two start to play together. The wolf stayed in the area, and in the years since, Nick has devoted much of his time to documenting him, naming him Romeo. Romeo became a Juneau fixture, known for playing with local dogs at nearby Mendenhall Glacier Park. Residents were unsure at first, but they soon realized that Romeo just wanted to play. Romeo didn’t just play with other dogs. “The amazing thing was Romeo’s understanding. It’s so inspiring to see three different species learn to live peacefully together in harmony. Source

Champawat Tiger The Champawat Tiger was a female Bengal tiger responsible for an estimated 436 deaths in Nepal and the Kumaon area of India, mostly during the 19th century.[1] Her attacks have been listed in the Guinness Book of World Records as the highest number of fatalities from a tiger.[2] She was shot in 1907 by Jim Corbett.[3] History[edit] The tiger began her attacks in a region of Nepal close to the Himalayas during the late 19th century, with people being ambushed by the dozen as they walked through the jungle. Hunters were sent in to kill the tiger, but she managed to evade them. Eventually, the Nepalese Army was called in. In 1907, the tiger was killed by British hunter Jim Corbett. Champawat town[edit] In Champawat, near the Chataar Bridge and on the way to Lohaghat, there is a "cement board" marking the place where the tigress was finally brought down. See also[edit] Tiger attack References[edit] Further reading[edit] Mills, Stephen (2004).

Bird swims 5,000 MILES every year to visit Brazilian man who nursed it back to life after he found it covered in oil and dying on a beach Pensioner Joao Pereira de Souza, 71, discovered dying penguin on beach. He nursed creature, which was covered in oil, back to health at his home. Mr de Souza named the creature Dindim and released him back into wild. This incredible video shows the touching relationship between a penguin and the Brazilian man who rescued him from certain death. Retired bricklayer and part time fisherman Joao Pereira de Souza, 71, from an island village just outside Rio de Janeiro in Brazil, discovered the tiny penguin languishing on rocks in 2011. The helpless creature was starving and covered in oil but Mr de Souza took him in and nursed him back to health, naming the South American Magellanic penguin Dindim. It took him a week just to clean the sticky black residue from the bird's feathers. When Dindim was well again Mr de Souza released him back into the sea, never expecting to see his new friend again. The flightless bird is believed to swim around 5,000 miles everytime he returns to Mr de Souza.

Tiger attacks in the Sundarbans Tiger attacks in the Sundarbans, in India and Bangladesh are estimated to kill from 0-50 (mean of 22.7 between 1947 and 1983) people per year.[1] The Sundarbans is home to over 100 [2] Bengal tigers,[3] one of the largest single populations of tigers in one area. Before modern times, Sundarbans were said to "regularly kill fifty or sixty people a year".[4] These tigers are a little smaller and slimmer than those elsewhere in India but remain extremely powerful and are infamous for destroying small wooden boats. They are not the only tigers who live close to humans; in Bandhavgarh, villages encircle the tiger reserves, and yet attacks on people are rare. Precautions[edit] The locals and government officials take certain precautions to prevent attacks. Causes of the attacks[edit] No one is exactly sure why the tigers of the Sundarbans are so aggressive towards humans, but scientists, biologists, and others have speculated about a number of reasons. Responses to the attacks[edit] Tiger attack