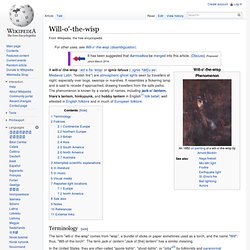 It resembles a flickering lamp and is said to recede if approached, drawing travellers from the safe paths. The phenomenon is known by a variety of names, including jack-o'-lantern, friars's lantern, hinkypunk, and hobby lantern in English[1] folk belief, well attested in English folklore and in much of European folklore. Terminology[edit] In the United States, they are often called "spook-lights", "ghost-lights", or "orbs"[2] by folklorists and paranormal enthusiasts.[3][4] The names will-o'-the-wisp and jack-o'-lantern are explained in etiological folk-tales, recorded in many variant forms in Ireland, Scotland, England, Wales, Appalachia, and Newfoundland. One version, from Shropshire, recounted by K. Folklore[edit] Continental Europe[edit]

The Bologna Stone Was a Glowing Mystery for 400 Years. This Gemstone Is Two Different Colors At Once. Here's How This Ancient Mayan Pyramid Makes Bird Calls. The Place Where Bridges Are Grown Instead of Built. Sunstone (medieval) Iceland spar, possibly the Icelandic medieval sunstone used to locate the sun in the sky when obstructed from view. 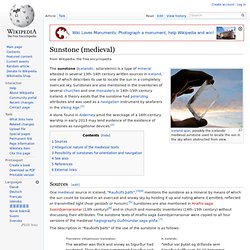 A stone found in Alderney amid the wreckage of a 16th-century warship in early 2013 may lend evidence of the existence of sunstones as navigational devices.[2] One medieval source in Iceland, "Rauðúlfs þáttr",[3][4] mentions the sunstone as a mineral by means of which the sun could be located in an overcast and snowy sky by holding it up and noting where it emitted, reflected or transmitted light (hvar geislaði úr honum).[5] Sunstones are also mentioned in Hrafns saga Sveinbjarnarsonar (13th century)[6] and in church and monastic inventories (14th–15th century) without discussing their attributes.

Viking Sunstones and Mummy Health Secrets. Dumping Oil In the Ocean Lets You Literally Master the Waves. Kinja is in read-only mode. 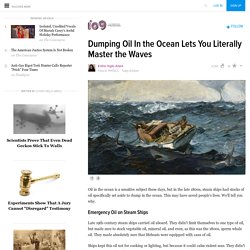 We are working to restore service. Fascinating. Never heard of that before. Really interesting. Flagged The first time I read about this practice was in Jules Verne's book "Fifteen year old captain". I obviously haven't read enough Verne. As an aside: Jules Verne is widely considered to have invented science fiction, but very few of his books are actually science fiction. St. Elmo's fire. St. 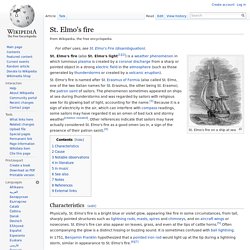 Elmo's fire on a ship at sea St. Elmo's fire is named after St. Erasmus of Formia (also called St. Elmo, one of the two Italian names for St. Characteristics[edit] In 1751, Benjamin Franklin hypothesized that a pointed iron rod would light up at the tip during a lightning storm, similar in appearance to St. Cause[edit] Conditions that can generate St.Elmo's fire are present during thunderstorms, when high voltage differentials are present between clouds and the ground underneath. The nitrogen and oxygen in the Earth's atmosphere cause St. Notable observations[edit] Welsh mariners knew it as canwyll yr ysbryd ("spirit-candles") or canwyll yr ysbryd glân ("candles of the Holy Ghost"), or the "candles of St. References to St. In 15th-century Ming China, Admiral Zheng He and his associates composed the Liujiagang and Changle inscriptions, the two epitaphs of the treasure voyages where they made a reference to St.

Charles Darwin noted the effect while aboard the Beagle. St. St. But now St. THE MYSTERY OF DAMASCUS STEEL APPEARS SOLVED. TWO metallurgists at Stanford University, seeking to produce a ''superplastic'' metal, appear to have stumbled on the secret of Damascus steel, the legendary material used by numerous warriors of the past, including the Crusaders. 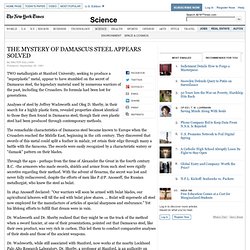 Its formula had been lost for generations. Analyses of steel by Jeffrey Wadsworth and Oleg D. Sherby, in their search for a highly plastic form, revealed properties almost identical to those they then found in Damascus steel, though their own plastic steel had been produced through contemporary methods. The remarkable characteristics of Damascus steel became known to Europe when the Crusaders reached the Middle East, beginning in the 11th century. They discovered that swords of this metal could split a feather in midair, yet retain their edge through many a battle with the Saracens. Legendary Swords' Sharpness, Strength From Nanotubes, Study Says. November 16, 2006 New studies of Damascus swords are revealing that the legendary blades contain nanowires, carbon nanotubes, and other extremely small, intricate structures that might explain their unique features. 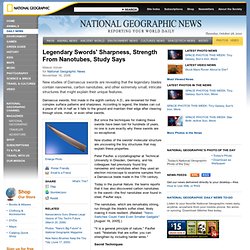 Damascus swords, first made in the eighth century A.D., are renowned for their complex surface patterns and sharpness. According to legend, the blades can cut a piece of silk in half as it falls to the ground and maintain their edge after cleaving through stone, metal, or even other swords. But since the techniques for making these swords have been lost for hundreds of years, no one is sure exactly why these swords are so exceptional. My Favorite Literary Physics Myth. These Astronomical Clocks Were a Wonder of the Medieval World.