San Carlo alle Quattro Fontane. History[edit] The monastic buildings and the cloister were completed first after which construction of the church took place during the period 1638-1641 and in 1646 it was dedicated to Saint Charles Borromeo. 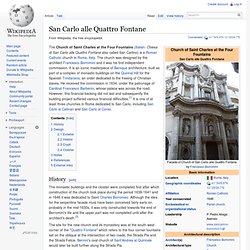 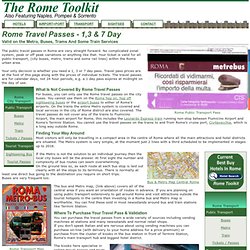 No complicated zonal system, peak or off peak variations or anything like that. Your ticket is valid for all public transport, (city buses, metro, trams and some rail lines) within the Rome urban area. Your only decision is whether you need a 1, 3 or 7 day pass. Travel pass prices are at the foot of this page along with the prices of individual tickets. The travel passes are for calendar days, not 24 hour periods, e.g. a 1 day pass expires at midnight on the day of use. Rome Open Top Hop On Hop Off Tourist Buses. At the moment there are no less than seven hop on, hop off tour (HOHO) sightseeing buses operating daily in Rome. 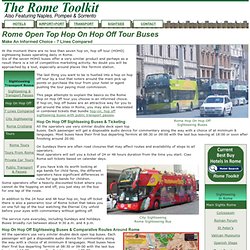 Six of the seven HOHO buses offer a very similar product and perhaps as a result there is a lot of competitive marketing activity. No doubt you will be approached by a tout, especially around places like Termini station. The last thing you want to be is hustled into a hop on hop off tour by a tout that loiters around the main pick up points or purchase the tour from your hotel or agent pushing the tour paying most commission. This page attempts to explain the basics so the Rome Hop on Hop Off tour you choose is an informed choice. If hop-on, hop off buses are an attractive way for you to get around the sites in Rome, you may also be interested in combined tickets that bundle hop-on, hop off sightseeing buses with public transport passes.

Hop On Hop Off Sightseeing Buses & Ticketing All the operators use very similar double deck open top buses. Rome Metro Map. Roman Colosseum or Coliseum: Rome Italy. The Flavius amphitheatre is the biggest and most imposing in the Roman world, but is also the most famous monument in Rome and is known as the "Colosseum" or "Coliseum". 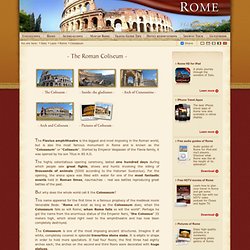 Started by Emperor Vespasian of the Flavia family, it was opened by his son Titus in 80 A.D. The highly ostentatious opening ceremony, lasted one hundred days during which people saw great fights, shows and hunts involving the killing of thousands of animals (5000 according to the historian Suetonius). For the opening, the arena space was filled with water for one of the most fantastic events held in Roman times, naumachias – real sea battles reproducing great battles of the past.

Vatican Museums - Official web site. Collections Online. Sistine Chapel. How to visit the Vatican in a day. By Duncan Garwood · It might only cover about half a square kilometre, but the Vatican looks every inch a religious superpower. 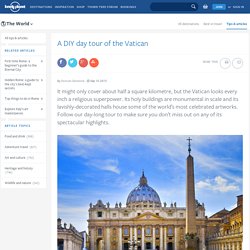 Its holy buildings are monumental in scale and its lavishly-decorated halls house some of the world’s most celebrated artworks. Follow our day-long tour to make sure you don’t miss out on any of its spectacular highlights. Pin this image. Contarelli Chapel, San Luigi dei Francesi, Rome, Italy. One of my favorites places in Rome is the church of San Luigi dei Francesi (St. 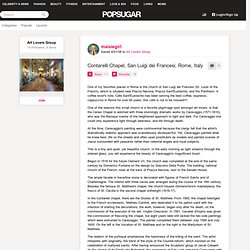 Louis of the French), which is situated near Piazza Navona, Piazza Sant'Eustachio, and the Pantheon. A coffee lover's note, Cafe Sant'Eustachio has been serving the best coffee, espresso, cappuccino in Rome for over 60 years; this cafe is not to be missed!!!! Caravaggio's paintings in the Contarelli Chapel, San Luigi dei Francesi. San Luigi dei Francesi - Rome, Italy. This article was contributed by Kurt Nemes. 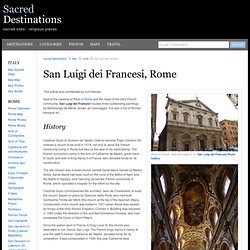 Seat of the cardinal of Paris in Rome and the heart of the city's French community, San Luigi dei Francesi houses three outstanding paintings by Michelango de Merisi, known as Caravaggio. It is also a riot of Roman baroque art. History. Caravaggio _ Death. Nothing that Caravaggio had done before was equal in scale, majesty or beauty to the first painting he produced for the French Church in Rome. 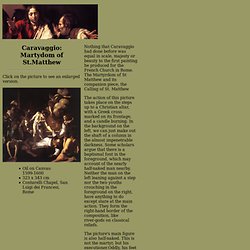 The Martyrdom of St Matthew and its companion piece, the Calling of St. Matthew The action of this picture takes place on the steps up to a Christian altar, with a Greek cross marked on its frontage, and a candle burning. In the background on the left, we can just make out the shaft of a column in the almost impenetrable darkness. Caravaggio _ Calling of Matthew. Caravaggio _ Inspiration. In 1565 the French Monsignor Matteo Contarelli acquired a chapel in San Luigi dei Francesi in Rome, but when he died twenty years later it had not yet been decorated. 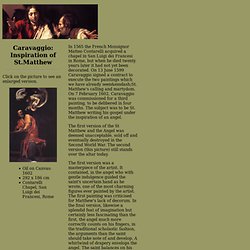 On 13 June 1599 Caravaggio signed a contract to execute the two paintings which we have already seen&emdash;St. Matthew's calling and martydom. On 7 February 1602, Caravaggio was commissioned for a third painting, to be delibered in four months. The subject was to be St. Matthew writing his gospel under the inspiration of an angel. A Perfect Day in Rome. Every perfect Rome day begins with a soul-nourishing coffee. 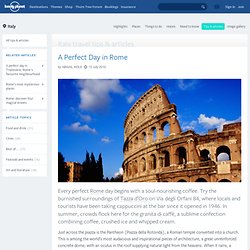 Try the burnished surroundings of Tazza d’Oro on Via degli Orfani 84, where locals and tourists have been taking cappuccini at the bar since it opened in 1946. In summer, crowds flock here for the granita di caffè, a sublime confection combining coffee, crushed ice and whipped cream.