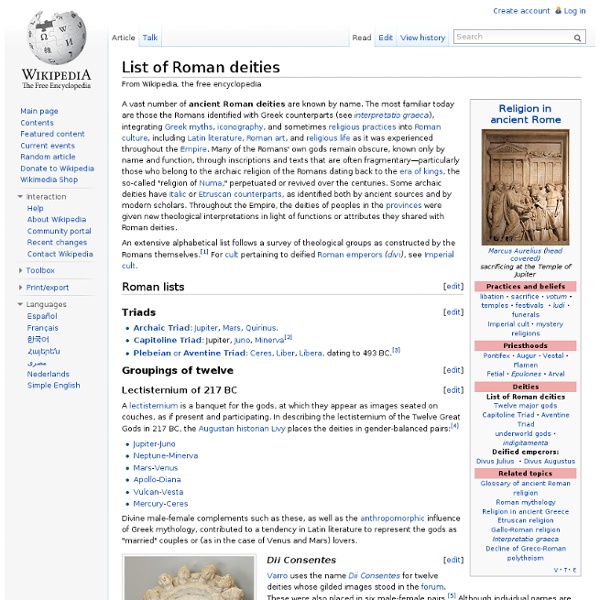 A vast number of ancient Roman deities are known by name. The most familiar today are those the Romans identified with Greek counterparts (see interpretatio graeca), integrating Greek myths, iconography, and sometimes religious practices into Roman culture, including Latin literature, Roman art, and religious life as it was experienced throughout the Empire. Many of the Romans' own gods remain obscure, known only by name and function, through inscriptions and texts that are often fragmentary—particularly those who belong to the archaic religion of the Romans dating back to the era of kings, the so-called "religion of Numa," perpetuated or revived over the centuries. Some archaic deities have Italic or Etruscan counterparts, as identified both by ancient sources and by modern scholars. Throughout the Empire, the deities of peoples in the provinces were given new theological interpretations in light of functions or attributes they shared with Roman deities. Roman lists[edit] Triads[edit]

Astrology's Future CLICK HERE for the full 26-page article. Summary: With Uranus transiting Aries for the first time since 1927-1934, cookbook astrology would predict a New Birth of astrology's relevance around the world by 2019. As with so many beloved astrological catch-phrases, “New Birth” is vague, generally applicable and perhaps ultimately meaningless in any informative sense. Astrologers historically have enjoyed highlighting significant technological revolutions accompanying Uranus transits: Uranus’ archetype is considered synchronous not just with inventions and technology but with astrology itself. Today’s interconnected Global Mind – the internet – renders the frequency of technological research, discoveries and inventions virtually continuous. But it’s uncertain that humanity will survive to the Age of Aquarius; or, if it does, that astrology will have much to offer survivors. Can Uranus’ transit yet help astrologers forecast the future of astrology itself? What Has Astrology Been?

Astrology and Weather Prediction A Basic Guide to Astro-Meteorology Charts to Use 1. Solar Ingress Cast a chart for the ingress of the sun into each of the four cardinal signs, i.e. 00 deg of Aries, Cancer, Libra and Capricorn. 2. 3. 4. 5. 6. 7. 8. 9. 10. 11. 12. Planets Sun - warm, dry, calm unless in violent combination. Moon - chilly, wettest of all planets. Mercury - wind, cool to cold, tends to dryness. Venus - Under Venus, we find a warm, moist influence tending to lower the barometer. Mars - acute, heat, extreme if combined with other violent planets. Jupiter - warm, pleasant breezes, under the right conditions can be a big wind, tends to dryness By itself, Jupiter is considered a fair weather influence, bringing temperate conditions and an invigorating atmosphere. Saturn - cold, wet, long lasting, extended gloom, stubborn and determined Typically produces cold and damp conditions that can be further aggravated when other testimonies concur. Signs Aries - warm, hot, dry - a moveable sign and can bring in some wind.

2014 ISAR Conference The International Society of Astrological Research invites you to attend ISAR’s 2014 Conference Would you like to advertise in the ISAR Conference Program book? Download advertising sheet Speakers/Lecturers click here to get ISAR Conference banners for your website. With Rick Tarnas, Christine Skinner, Nick Dagan Best, Chris Brennan, Michael Lutin, Lynn Bell, and more than fifty outstanding speakers! Join us on the enchanted and ancestral land of the Pima and Maricopa peoples, where tribal glyphs over two millennia old resonate with astrological cycles and symbols. Step into the circle.

ERIS : Greek Goddess of Strife & Discord | Mythology, w/ pictures | Roman Discordia ERIS was the goddess or spirit (daimona) of strife, discord, contention and rivalry. She was often represented specifically as the daimon of the strife of war, who haunted the battlefield and delighted in human bloodshed. Because of Eris' disagreeable nature she was the only goddess not to be invited to the wedding of Peleus and Thetis. When she turned up anyway, she was refused admittance and, in a rage, threw a golden apple amongst the goddesses inscribed "To the fairest." Eris was closely identified with the war-goddess Enyo. Homer, Iliad 4. 441 ff (trans. Hesiod, Theogony 211 ff (trans. Pseudo-Hyginus, Preface (trans. Eris was the mother of the Kakodaimones, the evil spirits which plagued mankind. Hesiod, Theogony 226 ff (trans. Stasinus of Cyprus or Hegesias of Aegina, Cypria Fragment 1 (summary from Proclus, Cherstomathia 1) (trans. Pseudo-Apollodorus, Bibliotheca E3. 2 (trans. Pseudo-Hyginus, Fabulae 92 (trans. Colluthus, Rape of Helen 38 ff (trans. Homer, Iliad 4. 441 ff (trans.

Aleister Crowley's writings on astrology The General Principles of Astrology These two books were published under the authorship of Evangeline Adams, but were both largely ghost-written by Aleister Crowley in 1915 as the document The General Principles of Astrology Astrology: Your Place in the Sun (1927) Astrology: Your Place Among The Stars with One Hundred Horoscopes of Famous People (1930) Additional Reading In the curriculum of A∴A∴ is Liber Βατραχοφρενοβοοκοσμομαχια sub figurâ DXXXVI (Batrachophrenoboocosmomachia). “How Horoscopes Are Faked” under the pseudonym Cor Scorpionis in The International, Vol XI No 11, Nov 1917 A review of “OGILVIE’S ASTROLOGICAL BIRTHDAY BOOK. In Magick Without Tears, chapters My Theory of Astrology and How to Learn the Practice of Astrology And there is much more writing by Aleister Crowley on other this and other topics available at The Libri of Aleister Crowley Books

Constellations of Words THE STELLIUM - 4 or more planets in the same House : Lynn Koiner - Astrological Research THE STELLIUM by Lynn Koiner A stellium occurs when 4 or more planets fall in a House. This configuration creates too much energy coming into the activities and affairs of that House. 1st HOUSE: When 4 or more planets fall in the 1st House, so many energies are coming into the personality segment that the individual can change from one day to the next. NOTE: Lyndon Johnson had a stellium in Virgo with Leo rising. 2nd HOUSE: Too much energy in the 2nd House is not good for finances, even though these people can do well salary-wise. 3rd HOUSE: Many planets here can produce a “mental collector” with all sorts of ideas and mental interests. The daughter of one client writes ads freelance but she obsesses over ideas causing mental frustration. An old astrological axiom is that, if the ruler of the 2nd House is part of a 3rd House stellium, the individual has a lot of ideas about making money but NO MONEY! One individual with a Virgo stellium has lupus. I have observed this stellium firsthand.

Astrological symbols Astrological symbols are images used in various astrological systems to denote relevant objects. A number of such images are shown below. History and origin[edit] Symbols for the classical planets, zodiac signs, aspects, lots, and the lunar nodes appear in the medieval Byzantine codices in which many ancient horoscopes were preserved.[1] In the original papyri of these Greek horoscopes, there were found a circle with the glyph representing shine( ) for the Sun and a crescent for the Moon.[2] The written symbols for Mercury, Venus, Jupiter, and Saturn have been traced to forms found in late Greek papyri.[3] The symbols for Jupiter and Saturn are identified as monograms of the initial letters of the corresponding Greek names, and the symbol for Mercury is a stylized caduceus.[3] A. S. Symbols for Uranus and Neptune were created shortly after their discovery. , invented by J. , was suggested by Lalande in 1784. Pluto, like Uranus, has two symbols in use. Meanings of the symbols[edit]

The Complete Node Book: Understanding Your Life's Purpose by Kevin Burk The Complete Node Book: Understanding Your Life's PurposeFrom "Introducing the Moon's Nodes" by Kevin BurkPosted by: DailyOM Introducing the Moon's Nodes The Moon's nodes are probably the most misunderstood points in astrology. Although few astrologers would dispute their importance in the chart, equally few astrologers could offer a modern, supportive interpretation of the nodes, what they represent, and why. As modern astrology moved away from the extremely fatalistic and often very negative traditional style of interpreting the planets, the nodes too received a facelift of sorts to make working with them more empowering. One of the difficulties in coming up with a truly comprehensive understanding of what the nodes represent in the natal chart is that the Moon's nodes are the only points in the chart that do not have an associated Western mythology. Let's review what we know about the nodes so far. Let's look at the Moon first, and get a feel for what the Moon brings to this process.