Pantheon. ORBIS. The History of Rome. Paris, ville antique. Les Grands Sites Archéologiques. The Gauls of Acy-Romance: Discovering the Remi. Article created on Thursday, March 8, 2012 Visitors to the village of Acy-Romance north of the modern day French city of Rheims, will see no sign of the Gallic village that was once there. 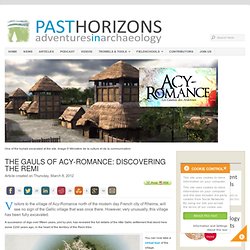 However, very unusually, this village has been fully excavated. Sallust — The War With Catiline. p3 Sallust The War With Catiline It behooves all men who wish to excel the other animals to strive with might and main not to pass through life unheralded, like the beasts, which Nature has fashioned grovelling and slaves to the belly. 2 All our power, on the contrary, lies in both mind and body; we employ the mind to rule, the body rather to serve; the one we have in common with the Gods, the other with the brutes. 3 Therefore I find it becoming, in seeking renown, that we should employ the resources of the intellect rather than those of brute strength, to the end that, since the span of life which we enjoy is short, we may make the memory of our lives as long as possible. 4 For the renown which riches or beauty confer is fleeting and frail; mental excellence is a splendid and lasting possession. p5 2 Accordingly in the beginning kings (for that was the first title of sovereignty among men), took different courses, some training their minds and others their bodies. 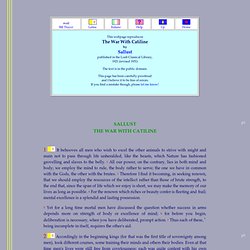 Legion XXIV - Fasces Page. An Icon representing the Strength and Power of Ancient Rome The FASCES was a cylindrical bundle of elm or birch rods bound together by red bands, from which an ax head projected; and which was borne by Lictors (attendants and body guards) before a Consul or high Magistrate, as a symbol of their authority. 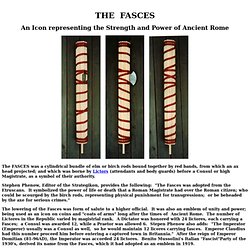 Stephen Phenow, Editor of the Strategikon, provides the following: "The Fasces was adopted from the Etruscans. It symbolized the power of life or death that a Roman Magistrate had over the Roman citizen; who could be scourged by the birch rods, representing physical punishment for transgressions; or be beheaded by the axe for serious crimes. " The lowering of the Fasces was form of salute to a higher official. It was also an emblem of unity and power; being used as an icon on coins and "coats of arms" long after the times of Ancient Rome. The reconstruction shown here was assembled by the Commander in February 2002. TOP BOTTOM Lictors with Fasces from Osprey Military Series # 291. Pomoerium (Smith's Dictionary, 1875) Fasces. An unusual fasces image, with the axe on the outside of the bundle of rods. 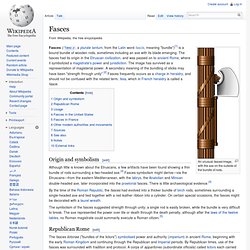 Origin and symbolism[edit] Although little is known about the Etruscans, a few artifacts have been found showing a thin bundle of rods surrounding a two-headed axe.[3] Fasces-symbolism might derive—via the Etruscans—from the eastern Mediterranean, with the labrys, the Anatolian and Minoan double-headed axe, later incorporated into the praetorial fasces. There is little archaeological evidence.[4] By the time of the Roman Republic, the fasces had evolved into a thicker bundle of birch rods, sometimes surrounding a single-headed axe and tied together with a red leather ribbon into a cylinder.

On certain special occasions, the fasces might be decorated with a laurel wreath. The symbolism of the fasces suggested strength through unity; a single rod is easily broken, while the bundle is very difficult to break. Republican Rome[edit] Usage[edit] Fasces in the United States[edit] Fasces in France[edit] SPQR: Movers & Shakers. Fasces. Roman Numerals. The Romans were active in trade and commerce, and from the time of learning to write they needed a way to indicate numbers. 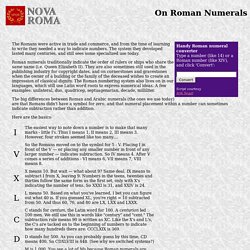 The system they developed lasted many centuries, and still sees some specialized use today. Roman numerals traditionally indicate the order of rulers or ships who share the same name (i.e. Queen Elizabeth II). They are also sometimes still used in the publishing industry for copyright dates, and on cornerstones and gravestones when the owner of a building or the family of the deceased wishes to create an impression of classical dignity.

The Roman numbering system also lives on in our languages, which still use Latin word roots to express numerical ideas.