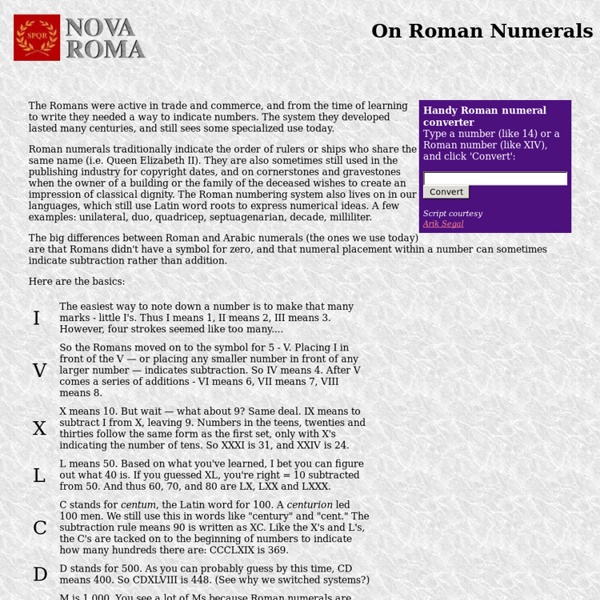 The Romans were active in trade and commerce, and from the time of learning to write they needed a way to indicate numbers. The system they developed lasted many centuries, and still sees some specialized use today. Roman numerals traditionally indicate the order of rulers or ships who share the same name (i.e. Queen Elizabeth II). They are also sometimes still used in the publishing industry for copyright dates, and on cornerstones and gravestones when the owner of a building or the family of the deceased wishes to create an impression of classical dignity.

How Products Are Made Ancient Rome Unit Study and Timeline by Cindy Downes - Oklahoma Homeschool This unit is ©Copyright 2004-2010 by Cindy Downes. All rights reserved. Permission is given to homeschooling parents and classroom teachers to use these units free of charge in their own homeschool or classroom only. These units may not be reprinted or distributed in any form, for any purpose (commercial or otherwise) without permission from Cindy Downes. Contact her at cindy@oklahomahomeschool.com. Index and Recommended Lesson Plan: Directions: This unit has been designed to be completed in nine weeks, covering two, 1 - 3 hour lessons per week. You can print off the free Ancient Rome Timeline Pieces and Timeline to use in your own homeschool. Unit Project Suggestion: Create a notebook for each unit. Back to Top Recommended Resources: Most books written for children about Ancient Rome cover the same topics but in a different order; therefore, you can use any children's book(s) on Ancient Rome that you are able to acquire for this unit. 30 Days to Understanding the Bible in 15 Minutes a Day!

60 Digital Media Resources You May Have Missed This sure has been another crazy week. Between Valentine's Day and the terrifying meteor that shook Russia, it is easy to understand how you could fall behind in other news. We at Mashable have rounded up the most important updates in tech and social media to keep you informed. So read below for tons of digital media resources, including coverage of Twitter's decision to place a value on your tweets, some new innovative apps and much more. Editor's Picks Pope Benedict XVI to Resign on February 28Pope Benedict XVI will resign on February 28, the Vatican announced.The Best Entrepreneurs Are Older, Have Less EgoWhat attributes does a founder need to make his or her startup thrive? Social Media For more social media news and resources, you can follow Mashable's social media channel on Twitter and become a fan on Facebook. Business & Marketing For more business news and resources, you can follow Mashable's business channel on Twitter and become a fan on Facebook. Tech & Mobile Lifestyle

Pompei Virtual Tour It is my opinion that Pompeii is the most important archeological site anywhere. Almost every other ancient urban site is simply the remains of a ghost town, long ago deserted by its citizens who carried away with them everything of value. Prior to the eruption of Vesuvius, Pompeii was a thriving city. Then it was buried with so little warning in 79 A.D. that Pompeii was literally frozen in time. If we want to know details about what life was like in a Roman city during the first century, I think by studying Pompeii we can get the very best perspective with the least speculation.

Ancient Roman History Timeline Provides a chronological index of the history of Ancient Rome with extensive links to internet resources. Emphasis is placed upon the use of primary source material, numismatics, and a focus upon the roles of women in ancient time. scroll down for the timeline Thank you for visiting! Timeline Menu Ridley Scott's GLADIATOR is a great film. Is it great history? Click here to learn the real story behind the events and characters portrayed in the movie. Kindly report any suggestions, problems, errors, or dead links by emailing david(at)exovedate.com Using info from this site? For detailed copyright information and bibliographic citation, click here contact the author by emailing david(at)exovedate.com (note: replace (at) with the @ symbol) Copyright © David Neelin: All Rights Reserved c. 2nd Millennium BCE || Archeological Remains Archeology reveals human remains, elk bones, bronze artifacts (rings, axes, etc.) c. 1st Millennium BCE || The Etruscans 753 BCE || Legendary Founding of Rome then later:

Winter Is Coming - News and rumors about HBO's Game of Thrones Take ecstasy, save your relationship This post has been corrected since it was originally published. The divorce rate is high. Internet dating has killed romance. And we are all going to die alone. But it might not have to be that way, says Oxford ethicist Brian Earp and colleagues Anders Sandberg and Julian Savulescu. Not if couples start taking trust-enhancing drugs like ecstasy, that is. If you look at this in the context of evolutionary biology, you realize that in order to maximize the survival of their genes, parents need to have emotional systems that keep them together until their children are sufficiently grown… [but] since we now outlive our ancestors by decades, the evolved pair-bonding instincts upon which modern relationships are built often break down or dissolve long before “death do us part.” If a lasting, drug-induced commitment to a lackluster partner doesn’t sound personally appealing, do it for the kids, Earp argues.