The Nigerian state and the economy of disaffection. Now that the protocols of power have disappeared and the inauguration of a new president over, we can resume in earnest the business of thinking aloud about the problems and prospects of Nigeria. 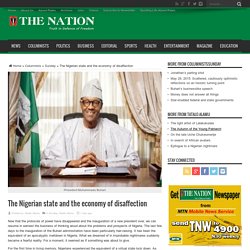 The last few days to the inauguration of the Buhari administration have been particularly hair-raising. It has been the equivalent of an apocalyptic meltdown in Nigeria. What we dreamed of in improbable nightmares suddenly became a fearful reality. For a moment, it seemed as if something was about to give. The Observer view on how Burundi’s fate has lessons across Africa. It could be argued that what happens in Burundi does not matter much in the overall scheme of things. 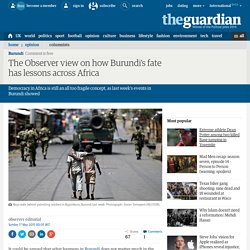 But to say so would be wrong. This small central African country, the scene last week of a thwarted military coup, has struggled to establish democratic institutions after a long civil war that ended, not wholly convincingly, in 2005. It was important, and not just for Burundians, that their brittle bid for responsible, accountable self-governance not be hijacked by a bunch of self-interested, bumbling generals, as has happened so often elsewhere.

Luckily for Burundi, so great was the mutineers’ incompetence that they failed to grasp the need to seize the state radio station, a prerequisite for any successful African coup. Djibouti: GCC’s strategic link to Africa. I write this week from Djibouti, a country small in area (23,000 sq. kilometers) and population (900,000), limited in its resources, but holds gigantic strategic significance. 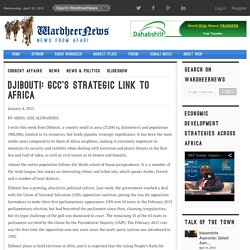 It has been the most stable oasis compared to its Horn of Africa neighbors, making it extremely important to maintain its security and stability when dealing with terrorism and piracy threats in the Red Sea and Gulf of Aden, as well as civil unrest as in Yemen and Somalia. Almost the entire population follows the Shafii school of Sunni jurisprudence. It is a member of the Arab League, but enjoys an interesting ethnic and tribal mix, which speaks Arabic, French and a number of local dialects.

Djibouti has a growing, pluralistic political culture. Last week, the government reached a deal with the Union of National Salvation (USN) opposition coalition, paving the way for opposition lawmakers to make their first parliamentary appearance. What will Sub-Saharan Africa Look Like in 2030? By Christian Hellwig for Global Risk Insights According to the U.S National Security Council, Sub-Saharan Africa’s role within the global community will change dramatically in the mid-term future. 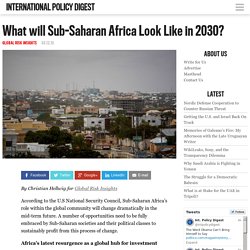 A number of opportunities need to be fully embraced by Sub-Saharan societies and their political classes to sustainably profit from this process of change. Africa’s latest resurgence as a global hub for investment Sub-Saharan Africa’s recent resurgence as a financial hub for global investment gives some important indication of the continent’s pivotal future role in an era of globalization and insatiable demand for economic growth. Large-scale funding and private and state investment initiatives such as the record fund-raising by London-based wealth fund Helios, Angola’s launch of a $1.6bn Africa infrastructure fund or a Swiss private bank’s first buyout fund set up early this year constitute encouraging signs amidst a sluggish world economy.

Blue economy: why women must ride the wave of Africa’s maritime sector. The African continent has a two-pronged weapon in its race to industrialise and make use of its natural resources, according to Nkosazana Dlamini-Zuma, chairwoman of the 54-member African Union (AU): women and oceans. 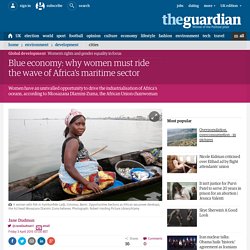 In March, while the former South African home affairs minister was attending a conference in Ethiopia on getting more women into parliament, the AU was hosting the first event specifically for women in Africa’s maritime sector in the Angolan capital, Luanda. The agenda covered how women can best make inroads into areas including shipping and maritime transport, fishing, offshore mining and other aspects of the “blue economy”. For Dlamini-Zuma, the two themes are intertwined. She believes that developing African sea power presents an unrivalled opportunity for women. Some-deaths-matter-more-than-others-8581715. Let’s be honest. We ignore Congo’s atrocities because it’s in Africa. South African Contractors Fight Boko Haram. While the world remains fixated on the “ISIS crisis” in the Middle East, a small group of South African soldiers-for-hire are once again proving what it takes to fight, and win, against terrorists and insurgents. 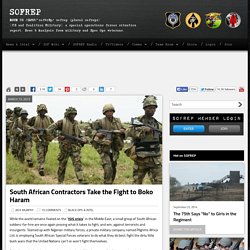 Teamed up with Nigerian military forces, a private military company named Pilgrims Africa Ltd. is employing South African Special Forces veterans to do what they do best: fight the dirty little bush wars that the United Nations can’t or won’t fight themselves. Boko Haram is the Islamic terrorist organization in Nigeria responsible for somewhere in the neighborhood of 5,000 civilian deaths over the last five years. Operational in northeast Nigeria, as well as parts of Chad and Cameroon, Boko Haram is also infamous for kidnapping hundreds of school girls intended to be sold into sexual slavery or to be married off the Boko Haram terrorists. Cables reveal S Africa at odds with allies on al-Qaeda. Russian intelligence claimed in February 2011 that al-Qaeda had established a "marine unit" based in North Africa and planned to use speedboats as "floating bombs", according to documents leaked to Al Jazeera's Investigative Unit. 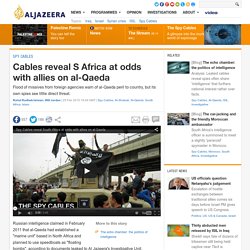 That was just one of dozens of alarmist cables sent by foreign intelligence agencies to their South African counterparts, who declined to embrace the claim that al-Qaeda presented a direct threat on South African soil. Africa is new ‘El Dorado of espionage’, leaked intelligence files reveal. Africa emerges as the 21st century theatre of espionage, with South Africa as its gateway, in the cache of secret intelligence documents and cables seen by the Guardian. 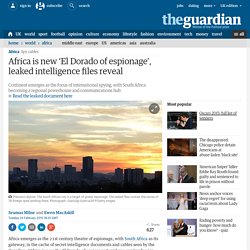 “Africa is now the El Dorado of espionage,” said one serving foreign intelligence officer. The continent has increasingly become the focus of international spying as the battle for its resources has intensified, China’s economic role has grown dramatically, and the US and other western states have rapidly expanded their military presence and operations in a new international struggle for Africa.

With South Africa a regional powerhouse and communications hub, Pretoria has become a centre of the continent’s new Great Game, intelligence officials say, and a target of global espionage. The United States, along with its French and British allies, is the major military and diplomatic power on the continent. Shocking Photographs of Drought in Kenya. Stefano De Luigi is a documentary photographer from Cologne. 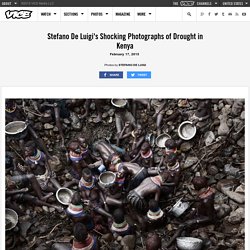 To say that his photos are jarring would be an understatement: They grab you by the neck. Stefano won three World Press Photo awards in different categories in 1998, 2008, and 2010 and has been published by magazines from the New Yorker to Time. In 2009 he shot a series of works based on the Kenyan drought, specifically within the Turkana region in northwest Kenya. "This tragedy, where animals and people were struggling to survive this terrible drought, was a sort of nightmare vision," says Stefano, who uses the drought as a lens through which to examine climate change more widely. African Boom Towns You May Never Have Heard Of. Boom towns come and boom towns go. 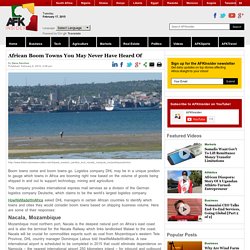 Logistics company DHL may be in a unique position to gauge which towns in Africa are booming right now based on the volume of goods being shipped in and out to support technology, mining and agriculture. Chinese Anti-Aircraft Missiles Appear in South Sudan — War Is Boring. By PETER DÖRRIE The civil war in South Sudan is a little more than a year old, but it won’t end for lack of fresh weapons.

Recently, South Sudanese troops proudly paraded a new surface-to-air missile launcher. China Is Surging Its Military Into Africa — War Is Boring. By PETER DÖRRIE Chinese activities in Africa have expanded massively during the last decade. Africa Is Arming Faster Than Any Other Continent — War Is Boring. African governments are spending huge sums acquiring new weaponry. Military budgets on the continent increased 8.3 percent on average from 2012 to 2013—and a whopping 81 percent between 2004 to 2013, according to new data from the Stockholm International Peace Research Institute.

No other region, not even Asia or the Middle East, is boosting its arms spending that fast. The growth rates look less impressive in absolute terms, as most African countries have a small economic base. Sudan Is Arming Africa and No One Cares — War Is Boring. By PETER DÖRRIE Sudan is full of conflict. Soldiers still murder civilians in Darfur, rampant violence engulfs South Kordofan and the Nuba Mountains, and rebels face off against the government in Blue Nile State.

But despite these troubles at home, the Sudanese government under Pres. Private equity in Africa: Unblocking the pipes. A secure whistleblowing platform for African media - afriLeaks. Explicit cookie consent. From dust bowl to bread basket: digging the dirt on soil erosion. Can we achieve a 70% increase in food production by 2050? It’s often quoted as an objective, but some areas of Africa have seen agricultural productivity decline by half due to erosion and desertification. Human Security in the Age of Ebola: Towards People-centered Global Governance. The Ebola outbreak that began in March 2014 continues to ravage the West African countries of Guinea, Liberia and Sierra Leone and has claimed over 4,500 lives thus far. Militarized Humanitarianism in Africa. 1st LD-Writethru: Deadly Marburg hemorrhagic fever breaks out in Uganda. LUt.jpg:larg. African Tensions & conflicts. Carte afrique geopolitique. Map_of_Trans-African_Highways.PNG (PNG Image, 832 × 832 pixels)

Cocoa Surges on Ebola Fears. UK money transfer firms accused of excessive charges on Africa remittances. Britain's leading money transfer companies are imposing a "super tax" on remittances to Africa and should be investigated by the government's consumer watchdog, the UK's leading international development thinktank said on Wednesday. The Overseas Development Institute called on the Financial Conduct Authority to look into Western Union and Moneygram as it issued a report which said Africa was losing $1.8bn a year from excessive charges on money sent home by workers in the rest of the world. Latest World Bank figures show that remittances from foreign workers are expected to be $436bn this year, more than three times what poor countries receive in overseas aid, but the ODI said the cost of sending money back to Africa was far higher than the global average.

"Migrants sending $200 home can expect to pay 12% in charges, which is almost double the global average. The amazing, surprising, Africa-driven demographic future of the Earth, in 9 charts. Traffic moves through downtown Lagos, Nigeria. NLÉ IS AN ARCHITECTURE, DESIGN AND URBANISM PRACTICE FOCUSED ON DEVELOPING CITIES. A Princeton University Project. INSIGHT-Nigerian pirate gangs extend reach off West Africa. Why Foreign Aid Is Hurting Africa.