The Women Rescued from Boko Haram Who Are Returning to Their Captors. Zimbabwe. Zimbabwe /zɪmˈbɑːbweɪ/, officially the Republic of Zimbabwe, is a landlocked country located in southern Africa, between the Zambezi and Limpopo rivers. It is bordered by South Africa to the south, Botswana to the southwest, Zambia to the northwest and Mozambique to the east. The capital is Harare. Zimbabwe achieved de jure sovereignty from the United Kingdom in April 1980, following 14 years as an unrecognised state under the conservative white minority government of Rhodesia, which unilaterally declared independence in 1965.

Zimbabwe has 16 official languages,[3] with English, Shona and Ndebele being most common. The present territory was first demarcated by Cecil Rhodes' British South Africa Company during the 1890s, becoming a self-governing colony as Southern Rhodesia in 1923. Etymology[edit] The name "Zimbabwe" is based on a Shona term for Great Zimbabwe, an ancient ruined city in the country's south-east whose remains are now a protected site. Mugabe - why talk about corruption now? Zanu PF party gatherings are usually the same. 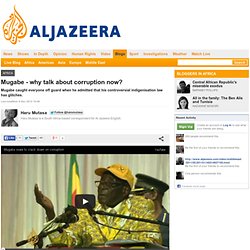 Thousands of supporters sing and dance for hours as they wait for President Robert Mugabe to give his speech. President Robert Mugabe, who has been in power for 32 years, has a routine. Having reported on many of his speeches for nearly 10 years I predict what the president will talk about at this year's ZANU PF conference in Gweru ... land reform, sanctions, colonialism etc. ... and he did so, almost in that order. I have even learned when to doze off and wake up again during the speeches, which can run as long as 90 minutes.

But Mugabe caught everyone off guard this time when he admitted his pride and joy, the controversial indigenisation law, has glitches. Two years after a controversial law was passed that required all foreign-owned businesses to sell 51 percent of their shares to black Zimbabweans, Mugabe says some of his party's ministers have been soliciting bribes from would-be investors. I am sure his critics are smiling. Joseph Kony: Brutal warlord who shocked world. Documentary detailing vile acts allegedly committed by Ugandan warlord gets 50M hitsU.S. 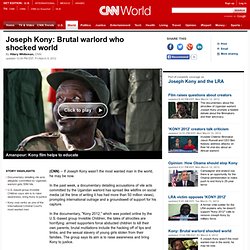 -based group Invisible Children says aim is to raise awareness, bring Kony to justiceKony now ranks as one of the International Criminal Court's most wanted men (CNN) -- If Joseph Kony wasn't the most wanted man in the world, he may be now. In the past week, a documentary detailing accusations of vile acts committed by the Ugandan warlord has spread like wildfire on social media (at the time of writing it has had more than 50 million views), prompting international outrage and a groundswell of support for his capture. In the documentary, "Kony 2012," which was posted online by the U.S. -based group Invisible Children, the tales of atrocities are horrifying: armed supporters force abducted children to kill their own parents, brutal mutilations include the hacking off of lips and limbs, and the sexual slavery of young girls stolen from their families.

Ugandans feel Kony message too late What is Kony like? Matabeleland. Map of Zimbabwe showing Matabeleland Map of Zimbabwe: Matabeleland is on the west History[edit] The San People and various ironworking cultures[edit] Stone Age evidence indicates that the San people, now living mostly in the Kalahari Desert, are the descendants of this region's original inhabitants, almost 100,000 years ago. 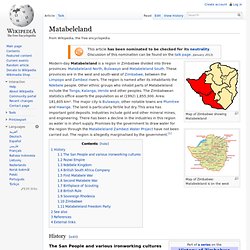 There are also remnants of several iron working cultures dating back to AD 300. Rozwi Empire[edit] Around the 10th and 11th centuries the Bantu-speaking Kalanga arrived from the north and settled in southern Africa in the Mapungubwe ruins. Ndebele Kingdom[edit] Matabeleland In the late 1830s, some 20,000 Ndebele, descendants of the Zulus in South Africa and led by Mzilikazi Khumalo, invaded the Kalanga Rozwi Empire. British South Africa Company[edit] In 1890, Rhodes sent a group of settlers, known as the Pioneer Column, into Mashonaland where they founded Fort Salisbury (now Harare). First Matabele War[edit] Second Matabele War[edit] Mlimo's call to battle was well-timed. Harare. Harare (/həˈrɑreɪ/;[3] officially called Salisbury until 1982[4]) is the capital of Zimbabwe. 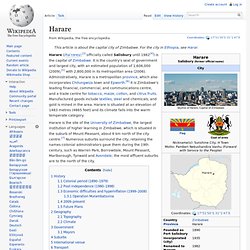 It is the country's seat of government and largest city, with an estimated population of 1,606,000 (2009),[5] with 2,800,000 in its metropolitan area (2006). Administratively, Harare is a metropolitan province, which also incorporates Chitungwiza town and Epworth.[6] It is Zimbabwe's leading financial, commercial, and communications centre, and a trade centre for tobacco, maize, cotton, and citrus fruits. Manufactured goods include textiles, steel and chemicals, and gold is mined in the area. Harare is situated at an elevation of 1483 metres (4865 feet) and its climate falls into the warm temperate category. History[edit] Colonial period (1890–1979)[edit] The area at the time of founding of the city was poorly drained and earliest development was on sloping ground along the left bank of a stream that is now the course of a trunk road (Julius Nyerere Way).