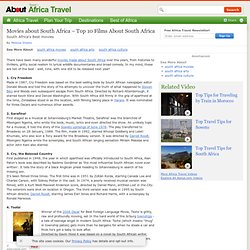 In my mind, these are ten of the best - well, nine, with one still to be released next year! 1. Cry Freedom Made in 1987, Cry Freedom was based on the best-selling book by South African newspaper editor Donald Woods and told the story of his attempts to uncover the truth of what happened to Steven Biko and Woods own subsequent escape from South Africa. Directed by Richard Attenborough, it starred Kevin Kline and Denzel Washington. 2. First staged as a musical at Johannesburg's Market Theatre, Sarafina! 3. First published in 1948, the year in which apartheid was officially introduced to South Africa, Alan Paton's book was described by Nadime Gordimer as 'the most influential South African novel ever written'. 4. . © www.tsotsi.com 5. 6. Africa Lesson Plans and Resources. In addition to the printables that can be used for any country study, I make additional sheets for specific countries ~ mapping activities and flag notebooking sheets {and sometimes more!}. 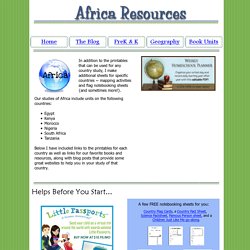 Our studies of Africa include units on the following countries:EgyptKenyaMoroccoNigeriaSouth AfricaTanzaniaBelow I have included links to the printables for each country as well as links for our favorite books and resources, along with blog posts that provide some great websites to help you in your study of that country. We took three weeks to study the country of Egypt and focused quite a bit on mummies and pyramids. Egypt is such a HUGE country to study with amazing history that could last for an entire year, and we only tapped into a little bit of what we could have. Our study included mummifying apples, making doll mummies and working on a small lapbook of things we had learned. The last two weeks we primarily used used the Magic Tree House Mummies and Pyramids guide by Mary Pope Osborne. South Africa for Kids: Facts about South Africa. Written by kids for kids.

Here are some interesting facts about South Africa for kids which were chosen and researched by kids especially for kids. 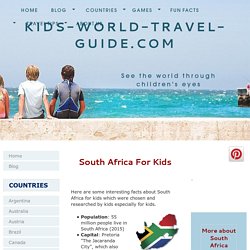 Click here.Climate: Various climatic regions. South Africa. Your task is to write a letter to the South African Government persuading them to let Nelson Mandela be released from jail. 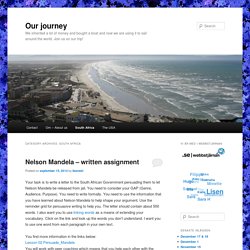 You need to consider your GAP (Genre, Audience, Purpose). You need to write formally. You need to use the information that you have learned about Nelson Mandela to help shape your argument. Use the reminder grid for persuasive writing to help you. The letter should contain about 500 words. You find more information in the links below:Lesson 02 Persuade_MandelaYou will work with peer coaching which means that you help each other with the structure in the texts. Nelson Mandela is one of the major leaders who fought against apartheid and due to that he was put in prison for 28 years.

Assignment – make sure you do this thoroughly since this is the base for a written assignment about Nelson Mandela. 1. Today’s lesson will focus on the apartheid laws and the consequences. Assignment Imagine that you are a man/woman living in Johannesburg in 1924. South Africa profile - overview. South Africa has one of the continent's biggest and most developed economies. 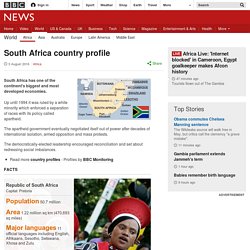 South Africa, on the continent's southern tip, is bordered by the Atlantic Ocean on the west and by the Indian Ocean on the south and east. 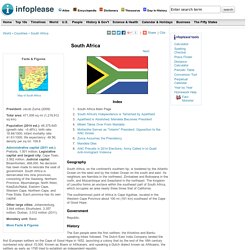 Its neighbors are Namibia in the northwest, Zimbabwe and Botswana in the north, and Mozambique and Swaziland in the northeast. The kingdom of Lesotho forms an enclave within the southeast part of South Africa, which occupies an area nearly three times that of California. The southernmost point of Africa is Cape Agulhas, located in the Western Cape Province about 100 mi (161 km) southeast of the Cape of Good Hope. Republic. The San people were the first settlers; the Khoikhoi and Bantu-speaking tribes followed. After occupying the Cape Colony in that year, Britain took permanent possession in 1815 at the end of the Napoleonic Wars, bringing in 5,000 settlers. The discovery of diamonds in 1867 and gold nine years later brought an influx of “outlanders” into the republics and spurred Cape Colony prime minister Cecil Rhodes to plot annexation. Tracks 2013: South Africa Has It All!

South African Kids Of all the countries on the continent of Africa, South Africa’s the most diverse in terms of its territory. It ranges from rolling hills to wide open savannah to the Kalahari Desert to the high peaks of the Drakensberg Mountains. South Africa. "Scapegoat" - A South African Short Film. South Africa: Maps, History, Geography, Government, Culture, Facts, Guide & Travel/Holidays/Cities.