Twitter Profile. #Litmash at the Twitter Fiction Festival. By Lauren Beukes on Nov 28th, 2012 I’m thrilled to be one of 20 writers participating in the Twitter Fiction Festival that kicks off today. I’ll be running #Litmash, a Tweet-sized story writing-game that relies on incongruous genre/style literary mash-ups. Everyone can play! #Litmash will run for an hour every day for the next five days, starting at 10am EST / 3pm GMT / 5 pm South African time. I’ll put out the call for suggestions for incongruous and unexpected genre/author-style combinations. eg: RomCom / HP Lovecraft or Self Help / Haruki Murakami. #Litmash session 1 (laurenbeukes.bookslive.co.za)

#Litmash session 2 (laurenbeukes.bookslive.co.za) By Lauren Beukes on Nov 29th, 2012 It’s Day Two of the Twitter Fiction Festival and the second round of #litmash, the literary-mash-up-story-in-one-tweet game, was freaking awesome and got a mention in The New York Times coverage of the festival. Out of a ton of inspired and diabolical suggestions for genre mash-ups, I went for: @newageamazon’s “Cold War Fairy Tale”, @FrancineToon’s “sex and the dystopian city” and @jpsmythe’s Gritty prison drama meets Muppets.

Here are my stories, followed by my favourites from other people. (Follow the #litmash hashtag on Twitter for more). Cold War Fairy TaleHe opened up the warhead and found her heart. Muppet Prison DramaThey shaved Animal to reveal the map, Gonzo picked the lock. (*Nick Harkaway is now demanding that I write this up as a full novel, as one of the items on his wishlist for Santa) (**A correction: RT @BrendanCByrne: WWII Russian tanks were actually the highest quality, better made than even German Panzers. #Litmash sessio 3 (laurenbeukes) By Lauren Beukes on Dec 12th, 2012 I’m late putting up the results of the last #Litmash, a literary genre remix game I ran as part of Twitter’s Fiction festival, in which I had an hour to write as many tweet-sized stories as possible according to suggested mash-up themes. 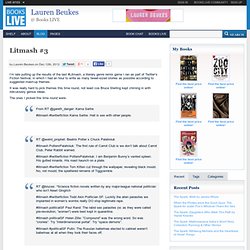 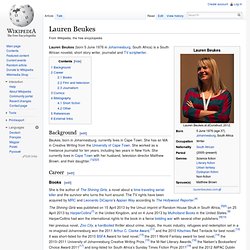 Background[edit] Beukes, born in Johannesburg, currently lives in Cape Town. She has an MA in Creative Writing from the University of Cape Town. She worked as a freelance journalist for ten years, including two years in New York. She currently lives in Cape Town with her husband, television director Matthew Brown, and their daughter.[1][2][3] Career[edit] Books[edit] She is the author of The Shining Girls, a novel about a time-traveling serial-killer and the survivor who turns the hunt around.

The Shining Girls was published on 15 April 2013 by the Umuzi imprint of Random House Struik in South Africa,[5][6] on 25 April 2013 by HarperCollins[7] in the United Kingdom, and on 4 June 2013 by Mulholland Books in the United States.[8] HarperCollins had won the international rights to the book in a fierce bidding war with several other publishers.[9][10] Books LIVE (profile) Goodreads (author profile) Lauren Beukes is a novelist, scriptwriter, comics writer, TV writer and occasional documentary maker and former journalist. 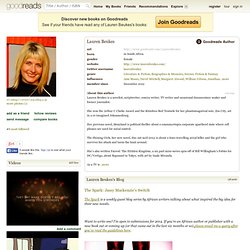 She won the Arthur C Clarke Award and the Kitschies Red Tentacle for her phantamagorical noir, Zoo City, set in a re-imagined Johannesburg. Her previous novel, Moxyland is political thriller about a consumertopia corporate apartheid state where cell phones are used for social control. The Shining Girls, her new novel, due out mid-2013 is about a time-travelling serial killer and the girl who survives his attack and turns the hunt around. She's also written Fairest: The HIdden Kingdom, a six part mini-series spin-off of Bill Willingham's Fables for DC/Vertigo, about Rapunzel in Tokyo, with art by Inaki Miranda. As a TV w...moreLauren Beukes is a novelist, scriptwriter, comics writer, TV writer and occasional documentary maker and former journalist.