The Countries of Africa

Morocco. Nigeria. Somalia. South Africa. Uganda. Angola’s Wikipedia Pirates Are Exposing the Problems With Digital Colonialism. Ivory Coast bounces back. From Abidjan airport's packed arrivals hall to the hotels and plush villas mushrooming across the city, Ivory Coast is booming, a rare African bright spot as the world's biggest cocoa producer bounces back from years of turmoil and civil war. 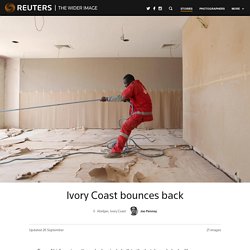 With elections due in a month, many Ivorians had expected a post-conflict growth spurt to pause for breath, but such is the confidence in a smooth vote and second term for incumbent Alassane Ouattara the expected blip has failed to materialise. A businessman makes a phone call on the grounds of Hotel Ivoire. The government is predicting growth of 9.6 percent this year, making the former French colony the stand-out performer on a continent being hammered by a slump in commodity prices, capital outflows and tumbling currencies. Nor do Abidjan's projections look fanciful. Women carry bricks at the construction site of real estate company Sipim. The International Monetary Fund's assessment is only marginally less bullish. The stigma for descendants of African slaves – Jori Lewis. It started a few years ago, with a conversation I had with my then-boyfriend, a Senegalese agronomist, first about peanuts and then about slavery. 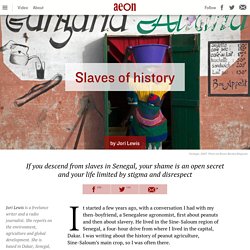 He lived in the Sine-Saloum region of Senegal, a four-hour drive from where I lived in the capital, Dakar. I was writing about the history of peanut agriculture, Sine-Saloum’s main crop, so I was often there. In fact, we met in a peanut village, one of many where he worked with farmers to help find alternative, higher-value vegetable crops. Who’s Afraid of African Democracy? by Helen Epstein. Poor Burundi. 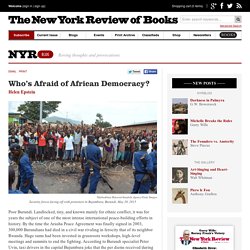 Landlocked, tiny, and known mainly for ethnic conflict, it was for years the subject of one of the most intense international peace-building efforts in history. By the time the Arusha Peace Agreement was finally signed in 2003, 300,000 Burundians had died in a civil war rivaling in ferocity that of its neighbor Rwanda. Huge sums had been invested in grassroots workshops, high-level meetings and summits to end the fighting. According to Burundi specialist Peter Uvin, taxi drivers in the capital Bujumbura joke that the per diems received during these protracted negotiations built the poshest neighborhood in the city.

Why technology is key to Africa’s future. When talk turns to technology trends at this year’s World Economic Forum Annual Meeting in Davos, it should also turn to Africa – because that’s where some of the world’s cutting-edge innovation is happening right now. 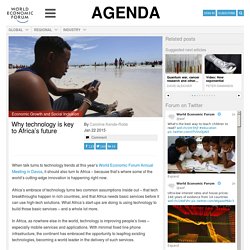 Africa’s embrace of technology turns two common assumptions inside out – that tech breakthroughs happen in rich countries, and that Africa needs basic services before it can use high-tech solutions. What Africa’s start-ups are doing is using technology to build those basic services – and a whole lot more. In Africa, as nowhere else in the world, technology is improving people’s lives – especially mobile services and applications. With minimal fixed line phone infrastructure, the continent has embraced the opportunity to leapfrog existing technologies, becoming a world leader in the delivery of such services. Take Ushahidi, for example. Ushahidi has incubated 150 tech startups and created more than 1,000 jobs. How motorcycle cabbies keep the peace in Rwanda. Islamic headscarf 101. There are hundreds of ways...

The History of French-Muslim Violence Began in the Streets of Algeria. Masr Zaman مصر زمان. Angola - This is the situation. This is the confusion. This is Angola. Farm workers watch as fields burn outside Saurimo A lone Baobab stands guard on the Angolan coast near Quiçama Park. 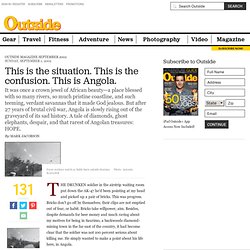 "I have lived many lifetimes in this hole": Chyngandangaly, a diamond mine outside Saurimo. Refugees loiter around a supply truck. The Heavy Metal Subculture of Botswana, Africa. The heavy metal cowboy get-ups sported by Dennis Hopper in Easy Rider and Mel Gibson in Mad Max are probably considered more than a little passé in the world of men’s style, better left in the 1970s. 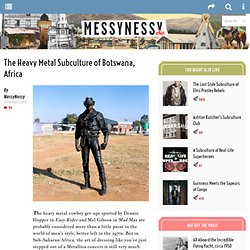 But in Sub-Saharan Africa, the art of dressing like you’ve just stepped out of a Metallica concert is still very much alive. EXHIBITIONS : ROOKE GALLERY. Renegades is a landmark exhibition by Frank Marshall, representing a decisive outcropping of a Heavy Metal subculture in Sub-Saharan Africa. 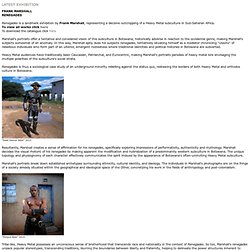 To view all works click here To download the catalogue click here Marshall's portraits offer a tentative and considered vision of this subculture in Botswana; historically adverse in reaction to the occidental genre, making Marshall's subjects somewhat of an anomaly. In this way, Marshall aptly dubs his subjects renegades, tentatively situating himself as a mediator chronicling "visions" of rebellious individuals who form part of an ulterior, emergent rootedness where traditional identities and political histories in Botswana are subverted. Heavy Metal audiences have traditionally been Caucasian, Patriarchal, and Eurocentric, making Marshall's portraits parodies of heavy metal lore envisaging the multiple polarities of the subculture's social strata. If we want to understand African history, we need to understand the Battle of Adwa. The northern Ethiopian town of Adwa is the place my grandfather called home. 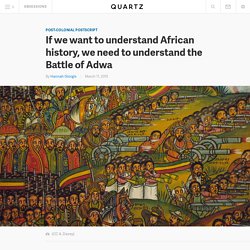 It’s a small market town in the Tigray region, home to several churches where Ethiopian Christians of multiple sects congregate. My grandfather spoke of Adwa with pride and reverence, sometimes slipping into Tigrigna (one of the languages spoken in Tigray) as he recalled memories. The name “Adwa” always sounded so regal coming from his mouth, at once both strong and comforting. For much of Ethiopia and its diaspora, Adwa’s significance is every bit as political as it is personal.

The 1937 massacre in Addis Ababa. Ethiopedia or Encyclopedia for Ethiopia: Ethiopian Hair Styles. Ethiopian Hairstyles from former Provinces of Ethiopia. 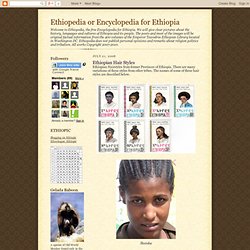 There are many variations of these styles from other tribes. The names of some of these hair styles are described below. Sheruba Qaray Mursi People Hairstyle. I LOVE SOUTHERN AFRICA - Mozambique: “Two Makua women of northern... ONLINE EXHIBITION (Ancient Manuscripts from the Desert Libraries of Timbuktu, Library of Congress) Anti-Black Prejudices in Tunisia: Breaking Down Taboos. “Blacks are our brothers and friends. 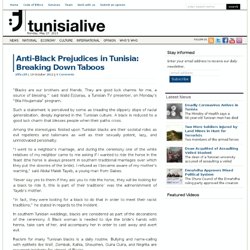 Green Sahara - The Big Picture. Photographer Mike Hettwer has been kind enough to share with us some of his photographs depicting what remains of the Green Sahara. About 9,000 years ago, a very wet climate prevailed in parts of the Sahara Desert called the Neolithic Subpluvial period. Lasting several thousand years, this Green Sahara was home to many grassland and woodland animals as well as humans.

While on an expedition for dinosaur fossils with paleontologist Paul Sereno in Niger in 2000, Hettwer discovered a burial area containing hundreds of skeletons from two distinct cultures, each thousands of years old - the Kiffian and Tenerian. Also found in the dry and desolate site were hunting tools, pottery, and bones of large land animals and fish. Lyricsja: EUROPEANS TAUGHT FOR CENTURIES that...

Breaking Barriers! DISTANT RELATIVES ( The University of Sankoré, or Sankore Masjid is...) Mathematics in Central Africa Before Colonization.