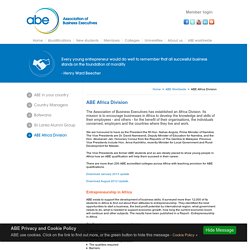 Its mission is to encourage businesses in Africa to develop the knowledge and skills of their employees - and others - for the benefit of their organisations, the individuals concerned, employers and the countries where they live and work. We are honoured to have as the President the Rt Hon. Nahas Angula, Prime Minister of Namibia. The Vice Presidents are Dr. David Namwandi, Deputy Minister of Education for Namibia, and the Hon. The Vice Presidents are former ABE students and so are ideally placed to show young people in Africa how an ABE qualification will help them succeed in their career. There are more than 200 ABE accredited colleges across Africa with teaching provision for ABE qualifications. Download January 2013 update Download August 2012 Update. Entrepreneurship in Africa ABE exists to support the development of business skills.

The Report covers a wide range of areas: Business Ventures from Africa. Into Africa IV. Marketplace Nigeria II. History. Historical context: Origins and influences By the 1970s and 1980s, many African countries were liberated, but these were also decades that were characterised by political instability, military coups, one-party governments, dictatorships and the heightened influence of Cold War politics in African affairs. 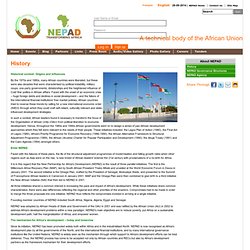 Faced with the onset of an economic crisis – huge foreign debts and declines in social development – and the failure of the international financial institutions' free market policies, African countries tried to reverse these trends by calling for a new international economic order (NIEO) through which they could craft self-reliant, culturally relevant and state-influenced development strategies. In such a context, African leaders found it necessary to transform the focus of the Organisation of African Unity (OAU) from political liberation to economic development. Enter NEPAD All three initiatives shared a common interest in increasing the pace and impact of Africa's development.

Focus Interview on: The Africa All Party Parliamentary Group in 2013.

Ric Leutwyler: A philanthropic strategy for enhancing the reach and impact of individuals, organizations and nonprofits. By Ric Leutwyler Founder & President, Philanthropegie What would you do if you found out you were using less than 1% of the resources available to help you achieve your philanthropic goals? 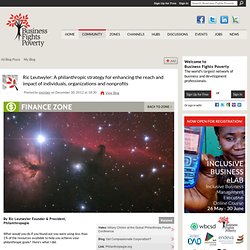 Here’s what I did. I have served philanthropic and social good organizations in some capacity for most of my adult life. A common theme I saw along the way was that these organizations struggled to achieve clearly defined and compelling goals due to a lack of resources. Over time I was able to assist these organizations by helping them connect with individuals or other organizations that had what they needed. Then, it struck me. In the year or so that I’ve been working on this, I’m not sure if I’ve spent more time explaining what Philanthropegie is all about – or helping people figure out how to pronounce it? Launched in summer 2012, Philanthropegie is finally a reality. There is no fee to access the resources or post a resource on the website. I know we’ve only scratched the surface. Okavango. How the African diaspora is contributing to the continent’s growth story. No one really knows how big the African diaspora is. 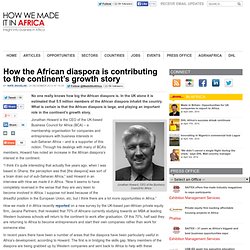 In the UK alone it is estimated that 5.5 million members of the African diaspora inhabit the country. What is certain is that the African diaspora is large, and playing an important role in the continent’s growth story. Most African countries could reach middle income status by 2025. Hardly a week goes by without an African investors’ conference or growth summit. 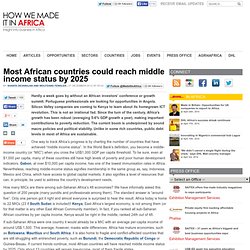 Portuguese professionals are looking for opportunities in Angola. Silicon Valley companies are coming to Kenya to learn about its homegrown ICT revolution. This is not an irrational fad. Since the turn of the century, Africa’s growth has been robust (averaging 5-6% GDP growth a year), making important contributions to poverty reduction. The current boom is underpinned by sound macro policies and political stability. One way to track Africa’s progress is by charting the number of countries that have achieved “middle income status”.

How many MICs are there among sub-Saharan Africa’s 48 economies? If sub-Saharan Africa were one country it would already be a MIC with an average per-capita income of around US$ 1,500. Africa’s more advanced economies can be grouped into four, not mutually exclusive, categories, of between six to eight countries: Second are commodity MICs. Forth are Africa’s next MICs.