The Future of Non-Military Drones (UAVs) in Africa. Kihara Kimachia Unmanned aerial vehicles (UAVs), popularly known as drones have been involved in the theatre of war for the last few years. 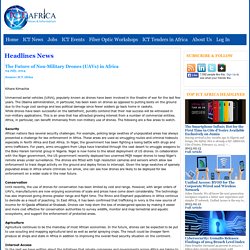 The Obama administration, in particular, has been keen on drones as opposed to putting boots on the ground due to the huge cost savings and less political damage since fewer soldiers go back home in caskets. While drones have been successful on the battlefront, pundits contend that their real success will be witnessed in non-military applications. This is an area that has attracted growing interest from a number of commercial entities. Africa, in particular, can benefit immensely from non-military use of drones. Security African nations face several security challenges. Conservation Until recently, the use of drones for conservation has been limited by cost and range. Agriculture Agriculture continues to be the mainstay of most African economies. Medical Industry Twenty percent of children worldwide do not receive even the most basic vaccines. 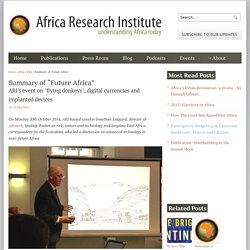 “The next decade will be among the most decisive in Africa’s history” Statistics In 2003, Kenyan mobile phone penetration was between 5 and 7%. The Journey Ledgard argues that Africa needs to embrace super-enhanced technology if the narrative of the continent is to change. A Radical But Possible Plan to Connect African Nations With Cargo Drones. A vision of 2020 Afrotech “Roads! 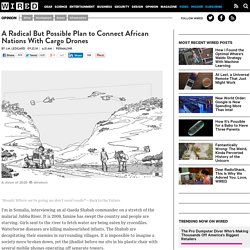 Where we’re going we don’t need roads!” —Back to the Future I’m in Somalia, interviewing an al-Qaeda Shabab commander on a stretch of the malarial Jubba River. This is the first time I clearly understand how important mobile phone technology has become in Africa. Five years later, I’m in Samburu, Kenya, to create another resilient technology in Africa: The world’s first commercial cargo drone route, to be operational by 2016. J.M. J.M. I am a novelist, but I am also director of a future Africa initiative at the Swiss Federal Institute of Technology, and for the last decade I traveled Africa as a foreign correspondent for The Economist. The mobile phone contributed more to anti-poverty efforts than any single development intervention. Even telecoms underestimated the market. I know that even if we deride change, even if we stand still, shielding our eyes, covering our ears, the future will be radical.

Drone delivery nets could be the mailboxes of the future. With drone technology progressing so quickly, it may not be too long before they start dropping packages at our doorsteps. 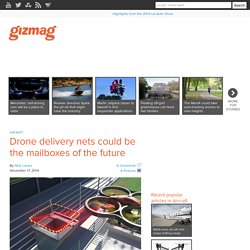 But proposals for how the vehicles can safely navigate fences, pets and small children haven't been entirely convincing so far. A pair of Australians believe they have the answer, with a system that sees drones zero in to drop deliveries into a purpose-built net, guided by LEDs to ensure centimeter-perfect accuracy. View all The Skynet concept won't attract the publicity of big name announcements like those of Amazon and Google, but it may help shape an equally important link in the chain. Neither of the companies has offered too much detail on this last step in the delivery drone process, other than a rope seen lowering cargo in Google's Project Wing video and Amazon's assumption that everybody has nice flat landing surfaces at their front doors.

What you need to know about commercial drones. Wondering why you don't see drones everywhere, despite the intention of Amazon and others to deliver all the things with flying robots? 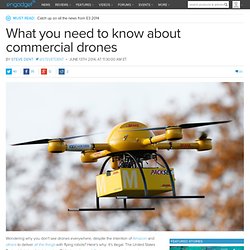 Here's why: It's illegal. The United States Federal Aviation Administration (FAA) doesn't permit filming, crop-spraying, spying, tour-guiding, pizza delivery or any other commercial drone applications (you can, however, fly one privately). "But that's unjust! " you may rail. "Why should the government stop businesses from plying their trades? " First, a little terminology. Rotary drones get the glory. As for fixed-wing UAVs, the FAA just approved the first commercial use over land of the AeroVironment Puma, a four-and-a-half-foot, hand-launched fixed-wing drone and the Insitu ScanEagle (pictured above). The UAV industry is already pretty large despite the handicap of being arguably illegal.

There are other tangible benefits to Joe Public besides prettier movies. Q&A: Could drones be the future of African transport? We encourage you to republish this article online and in print, it’s free under our creative commons attribution license, but please follow some simple guidelines: You have to credit our authors. 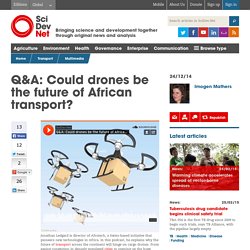