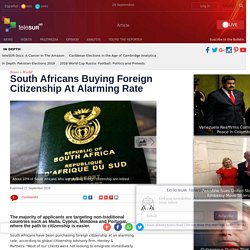 "Most of our clients were not looking to emigrate immediately. They are looking for an alternative, for an option, for if and when," said Amanda Smit, head of Henley & Partners for the east, central, and southern Africa markets. RELATED: African Ministers Embrace Innovative Environmental Solutions. South African cities among the wealthiest in Africa. JOHANNESBURG - Durban, Cape Town and Johannesburg are three of Africa’s six wealthiest cities according to a new report by New World Wealth and AfrAsia Bank in Mauritius. 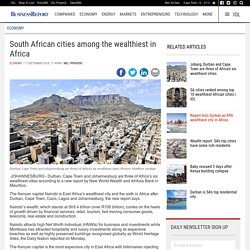 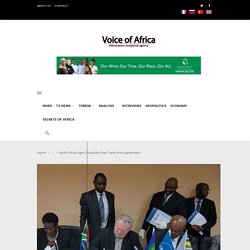 Signed on Friday, the TFTA represents an integrated market of 26 countries with a combined population of 625 million people and a total gross domestic product (GDP) of $1.6 trillion. South Africa signed the agreement in Kampala, Uganda, during the meeting of the Tripartite Sectoral Ministers’ Committee. The TFTA was launched by the Heads of States in Sharm el-Shaik, Egypt, in June 2015 and South Africa did not sign the agreement at that stage since there was outstanding work in some of the annexures to the agreement. "All the annexures have been completed and adopted by the tripartite Sectoral Ministers Committee, enabling South Africa to sign the agreement. 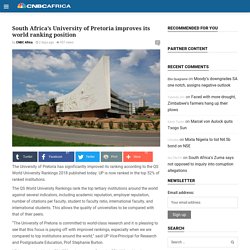 UP is now ranked in the top 52% of ranked institutions. The QS World University Rankings rank the top tertiary institutions around the world against several indicators, including academic reputation, employer reputation, number of citations per faculty, student to faculty ratio, international faculty, and international students. This allows the quality of universities to be compared with that of their peers. “The University of Pretoria is committed to world-class research and it is pleasing to see that this focus is paying off with improved rankings, especially when we are compared to top institutions around the world,” said UP Vice-Principal for Research and Postgraduate Education, Prof Stephanie Burton.

UP is now ranked in the 501-550 rank range, up from the 551-600 ranking last year. South African investors demand 100 acres of land in Gwadar for Industrial zone under CPEC. South Africa Expanding Trade Links with China and Oman. 28 de marzo de 2017, 10:51 Pretoria, Mar 28 (Prensa Latina) South Africa has reportedly embarked on a roadshow in China to attract investment in Special Economic Zones (SEZs), while enhancing cooperation with Oman on trade. 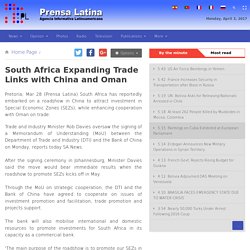 Trade and Industry Minister Rob Davies oversaw the signing of a Memorandum of Understanding (MoU) between the Department of Trade and Industry (DTI) and the Bank of China on Monday, reports today SA News. After the signing ceremony in Johannesburg, Minister Davies said the move would bear immediate results when the roadshow to promote SEZs kicks off in May. Through the MoU on strategic cooperation, the DTI and the Bank of China have agreed to cooperate on issues of investment promotion and facilitation, trade promotion and projects support. The bank will also mobilise international and domestic resources to promote investments for South Africa in its capacity as a commercial bank. At the same time, Minister Davies and his Omani counterpart, Dr. World - South Africa Introduces $260 Minimum Wage, Nigeria Struggles With $60 Per Month. 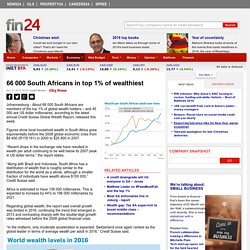 Figures show local household wealth in South Africa grew exponentially before the 2008 global economic crisis from $8 400 (R119 161) in 2000 to $25 800 in 2007. “Recent drops in the exchange rate have resulted in wealth per adult continuing to be well below its 2007 peak in US dollar terms,” the report states. “Along with Brazil and Indonesia, South Africa has a distribution of wealth that is roughly similar to the distribution for the world as a whole, although a smaller fraction of individuals have wealth above $100 000,” Credit Suisse said. Africa is estimated to have 136 000 millionaires. This is expected to increase by 44% to 196 000 millionaires by 2021. 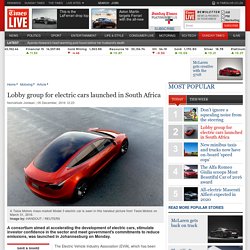 Image by: HANDOUT / REUTERS A consortium aimed at accelerating the development of electric cars‚ stimulate investor confidence in the sector and meet government’s commitments to reduce emissions‚ was launched in Johannesburg on Monday. The Electric Vehicle Industry Association (EVIA)‚ which has been endorsed by the Department of Trade and Industry‚ will serve as a lobby group‚ enabling industry to work effectively with government and researchers to stimulate the sector. Two Steve Jobs Schools opened in South Africa. 6 July 2016 The founder of Steve Jobs Schools (SJS), Dutch market researcher and entrepreneur Maurice de Hond, wants to use the creative philosophies that have made Apple one of the most innovative and successful companies in the world, to revolutionise the traditional method of classroom teaching through embracing technology to give students the freedom to learn at their own pace. 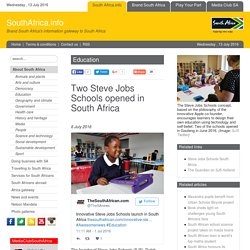 The Jobs philosophy on business, design and life revolved around self- actualisation, having the confidence to find and listen to your inner voice, and never settling, even when you had succeeded. De Hond believes these pillars, along with the advantages of technology, can help learners uncover their hidden potential and use it effectively in attaining success. The new South African schools, one in Sundowner, Randburg and the other in Ruimsig, Roodepoort, are the pilot programmes for the idea outside the 12 established schools in Holland. 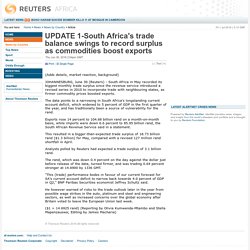 The data points to a narrowing in South Africa's longstanding current account deficit, which widened to 5 percent of GDP in the first quarter of the year, and has traditionally been a source of vulnerability for the rand. Exports rose 14 percent to 104.68 billion rand on a month-on-month basis, while imports were down 6.6 percent to 85.95 billion rand, the South African Revenue Service said in a statement. This resulted in a bigger-than-expected trade surplus of 18.73 billion rand ($1.3 billion) for May, compared with a revised 127 million rand shortfall in April. Analysts polled by Reuters had expected a trade surplus of 3.1 billion rand. South Africans drowning in debt. Johannesburg - As South Africans celebrate Freedom Day, more of them have fallen into the debt trap made worse by the increase in the general cost of living, said debt counsellor Wendy Monkley. 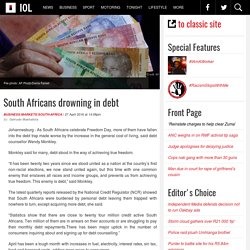 Monkley said for many, debt stood in the way of achieving true freedom. “It has been twenty two years since we stood united as a nation at the country’s first non-racial elections, we now stand united again, but this time with one common enemy that enslaves all races and income groups, and prevents us from achieving true freedom. This enemy is debt,” said Monkley. The latest quarterly reports released by the National Credit Regulator (NCR) showed that South Africans were burdened by personal debt leaving them trapped with nowhere to turn, except acquiring more debt, she said. “Statistics show that there are close to twenty four million credit active South Africans. South Africa exceeds foreign investment target by R20-billion. 4 March 2016 South Africa attracted R64.3-billion in foreign direct investment (FDI) between 1 April and 31 December 2015, the first three quarters of the financial year - surpassing its target of R45-billion by almost R20-billion.

This was announced by Minister Siyabonga Cwele, chair of the International Cooperation, Trade and Security cluster, during a media briefing in Cape Town last week. South Africa, he said, remains a competitive investment destination, despite a troubled global economy. "For citizens, the investment means an opportunity to work, to develop their skills, earn a sustainable income and feed a family," Cwele said. He said South Africa continues its engagements with the European Union (EU), its largest trading partner and foreign investor. S.Africa has 46,800 millionaires, Indians ahead of blacks: report.

By: Trust Matsilele Last Updated: 16 May 2015|14:19 GMT S.Africa has 46,800 millionaires, Indians ahead of blacks. PHOTOS: alresalah Empowerment policies are failing black South Africans in terms of wealth growth while favouring Indian South Africans. These findings emerged from the South Africa 2015 Wealth Report. SUNDAY TIMES - SA growth could be fuelled by a 'big push into Africa' But it's a script that the country, Africa's most developed, needn't follow. If local companies pursue opportunities in advanced manufacturing and infrastructure elsewhere on the continent, the economy is poised to grow by R1-trillion and create 3.4 million new jobs over the next 15 years, according to research to be released this week... South Africa's Geographic Challenge.

South Africa Legalises Drones. SA-West Africa multi-purpose trade expected to grow in 2015 - Cape Business News. According to SafmarineMPV’s James Lewer, “Intra-Africa trade of value-added, manufactured goods has grown faster than African exports to the rest of the world, according to a recent Economic Outlook Report published by the African Development Bank, OECD Development Centre and United Nations Development Programme (UNDP.) “South African companies such as Gauteng-based Dominex – which provides infrastructure parts and manufactured goods to railway and mining companies in Africa – have seemingly proven their competitiveness globally as well as their ability to respond to West Africa’s needs for goods and services.” Earlier this year Dominex was awarded a tender to supply Angola’s major railway line, Caminho de Ferro de Benguela (CFB) with 11 rail wagons, following a global tender process.

Dominex had previously supplied two train sets to CFB in 2011 and were chosen again as the preferred supplier for the new tender as a result of their proven ability. West Africa’s oil and gas industry lures Cape Town fabricator - Cape Business News. “Securing a substantial fabrication contract in Ghana for Subsea 7 is the entrée into establishing a fully-fledged fabrication subsidiary to service the oil and gas industry in West Africa”, managing director of Bellville based Belmet Marine and Engineering, declared, Pieter Kroon, declared. The 46 year old specialist steel fabrication company established operations in Ghana two years ago to exploit the opportunities of the region’s off-shore and on-shore oil, gas and mining activities. “Establishing ourselves in Ghana was a strategic decision – geographically, it is ideally placed amongst the offshore oil and gas fields of the Gulf of Guinea.

Ghana is a stable, English speaking country where the population are keen to work and the government welcomes foreign investment with a minimum of red tape, realising that establishing new industries contributes to the nation’s development and economy by creating jobs and acquiring skills,” explained Kroon. SA vineyards make African inroads. Shoprite shifts investment focus to Africa - Industrials. Africa - First African military aircraft takes to the skies, making aviation history. South Africa’s Credit Rating Cut to One Level Above Junk by S&P. South Africa’s credit rating was cut to one level above junk by Standard & Poor’s as the longest mining strike in the nation’s history threatens to drag the economy into recession, curbing government revenue. The foreign-currency rating was lowered to BBB- from BBB and the local-currency rating was reduced to BBB+ from A-, S&P said in a statement yesterday. 5 Top Industries to Start-up a new company in South Africa.

By Stephanie Marz | 02 June 2014 With the talk of starting up a small business being the way of the future, being or at least entering the entrepreneurial world in South Africa has become a big topic of interest. South Africa enters economic deep freeze. SA entrepreneur launches world’s first bitcoin-only betting site: BetVIP. South Africa - and Johannesburg - the richest in Africa. Nafuna TV's Nqobizitha 'Enqore' Mlilo, named top innovator by Google. Nqobizitha Mlilo, founder of Nafuna TV has been been named one of the 20 innovative and entrepreneurial web adopters from across sub-Saharan Africa and becomes a semi-finalists for the Google’s Africa Connected prize. Nqobizitha, through Nafuna TV, has been selected for using YouTube to provide his audience with animation and HD video content. According to the Google brief on him, he’s also used Google Search to teach himself the trade.