ANALYSIS: Are foreigners stealing jobs in South Africa? Note: This article was originally published on 8 February 2015. 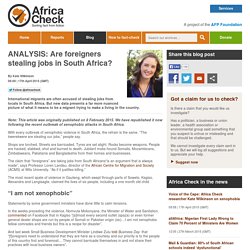 We have republished it now following the recent outbreak of xenophobic attacks in South Africa. With every outbreak of xenophobic violence in South Africa, the refrain is the same. “The kwerekwere are stealing our jobs,” people say. Shops are torched. Streets are barricaded. The claim that “foreigners” are taking jobs from South Africans“is an argument that is always made”, says Professor Loren Landau, director of the African Centre for Migration and Society (ACMS) at Wits University. The most recent spate of violence in Gauteng, which swept through parts of Soweto, Kagiso, Alexandra and Langlaagte, claimed the lives of six people, including a one month old child. “I am not xenophobic” Statements by some government ministers have done little to calm tensions. Zuma takes Oath of Office:Saturday 24 May 2014. President Jacob Zuma will address the nation after taking the national salute as the SA Air Force executes a fly-past and the SA Defence Force performs a 21-gun salute. 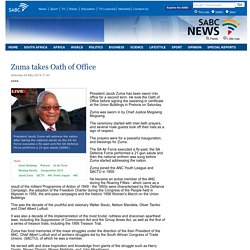 (SABC) President Jacob Zuma has been sworn into office for a second term. Presidential Inauguration. Thousands set to attend Zumas inauguration:Wednesday 21 May 2014. Cabinet has finalised preparations for Jacob Zuma’s inauguration. 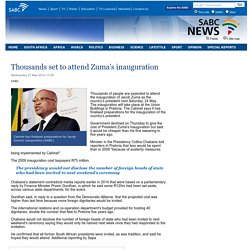 (SABC) Thousands of people are expected to attend the inauguration of Jacob Zuma as the country's president next Saturday, 24 May. SABC Election Website - Your One Stop Elections Information Site. Election 2014 – the new style of campaigning:Wednesday 30 April 2014. Susan Booysen says e-tolls and the so-called secrecy bill in the last two years had triggered widespread and reasonably successful action. 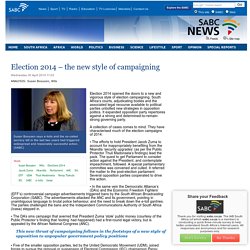 (SABC) Election 2014 opened the doors to a new and vigorous style of election campaigning. South Africa’s courts, adjudicating bodies and the associated legal recourse available to political parties unbolted new strategies in opposition politics. It expanded opposition party repertoires against a strong and determined-to-remain-strong governing party. A collection of cases comes to mind. Google Doodle marks SA election:Wednesday 7 May 2014. Clicking on the doodle led to links for election day news, the Electoral Commission of SA (IEC), and to a wikipedia collaboration explaining the elections and the composition of South Africa's Parliament. 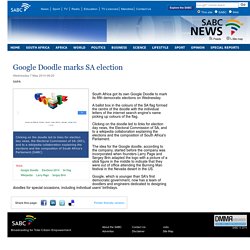 (SABC) South Africa got its own Google Doodle to mark its fifth democratic elections on Wednesday. NFP held their rally at George Goch stadium in Johannesburg. Q-Base 28: SABC elections website. COPE says it will do much better in these elections. The data and tech behind Elections 2014:Sunday 4 May 2014. Technology and data have played a large role in South Africa’s 2014 elections coverage. 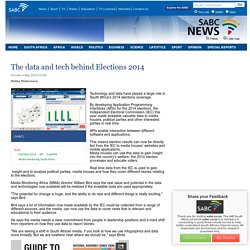 By developing Application Programming Interfaces (APIs) for the 2014 elections, the Independent Electoral Commission (IEC) this year made available valuable data to media houses, political parties and other interested parties in real time. APIs enable interaction between different software and applications. This means election results can now be directly fed from the IEC to media houses’ websites and mobile applications. Media houses can use this data to gain insight into the country’s welfare, the 2014 election processes and educate voters.

Real time data from the IEC is used to gain insight and to analyse political parties, media houses and how they cover different stories relating to the elections. Final elections candidates list released:Wednesday 23 April 2014. The commission also assured that they would release a breakdown of the list as per gender, age, etc. 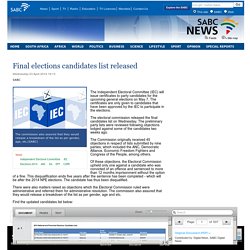 Turnout and reasons to vote in Election 2014:Friday 2 May 2014. General elections are expected to take place on May 7 in South Africa. 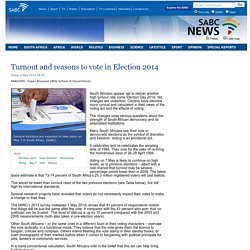 (SABC) South Africans appear set to deliver another high turnout rate come Election Day 2014. Yet, changes are underfoot. Citizens have become more cynical and calculated in their views of the voting act and the effects of voting. The changes pose serious questions about the strength of South African democracy and its associated institutions. Broadcasters can’t ban ads: Expert:Wednesday 30 April 2014. Groovin Nchabeleng says no broadcaster is allowed to flight a banned ad. 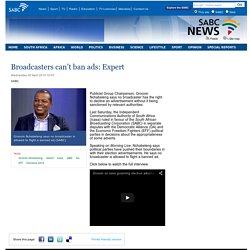 (SABC) Publicist Group Chairperson, Groovin Nchabeleng says no broadcaster has the right to decline an advertisement without it being sanctioned by relevant authorities. Last Saturday, the Independent Communications Authority of South Africa (Icasa) ruled in favour of the South African Broadcasting Corporation (SABC) in separate disputes with the Democratic Alliance (DA) and the Economic Freedom Fighters (EFF) political parties in decisions about the appropriateness of some adverts.

Speaking on Morning Live, Nchabeleng says political parties have pushed their boundaries in with their election advertisements. He says no broadcaster is allowed to flight a banned ad. Click below to watch the full interview. South Africas voting underway :Wednesday 7 May 2014. Voting is also going ahead at places identified as hotspots because of violent protests there in the recent past. 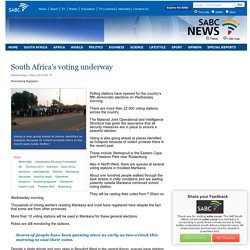 (Liabo Setho) Polling stations have opened for the country's fifth democratic elections on Wednesday morning. There are more than 22 000 voting stations across the country. The National Joint Operational and Intelligence Structure has given the assurance that all security measures are in place to ensure a peaceful election. Voting is also going ahead at places identified as hotspots because of violent protests there in the recent past. These include Sterkspruit in the Eastern Cape and Freedom Park near Rustenburg. Also in North West, there are queues at several voting stations in troubled Marikana. About one hundred people walked through the dark streets in chilly conditions and are waiting patiently outside Marikana combined school voting station.

Last week, some opposition parties filed an urgent application in the Electoral Court to force Tlakula to resign. 75 000 special votes so far: IEC:Wednesday 16 April 2014. The IEC says of the 75 000 special votes already approved, about 57 000 were for home visits and 17 500 for voting at voting stations. (SABC) Just over 75 000 applications for special votes have been approved so far, the Electoral Commission of SA (IEC) said on Wednesday. "The electoral commission reminds voters that the deadline for applications for special votes in this year's national and provincial elections is Thursday," the IEC said in a statement. There were two categories of special votes -- home visits and special voting at a registered voting station. For a home visit election officials would visit voters who had successfully applied due to physical infirmity, disability, or pregnancy.

Special voting at a registered voting station was for people who would not be in their voting district on election day. SA expats vote in Kenya:Wednesday 30 April 2014. The ballot box is sealed in front of 10 early voters in Kenya. (Vauldi Carelse) The South African High Commission in Nairobi is among 124 missions making last minute voting preparations. The transformation of the South African High Commission in Nairobi from an ordinary overseas mission into a voting station is complete, with ballot boxes and booths on loan from the Kenyan Electoral Commission (KEC) KEC political consular, Tian Kriek, says Kenya is also helping with security. Policemen from the diplomatic policing unit will be on duty to ensure that voting runs smoothly. IEC Counting and verification stands at 99.7 %. Social media fires up election season :Monday 24 March 2014.

South African opposition parties and their respective leaders are highly active on social media. (SABC) With just a few weeks to go before Election Day, political parties are using every available tool to woo voters. In the past rallies and door-to-door campaigns were the norm, but today, the new tool is social media. Social networking sites like Facebook, Twitter and YouTube have emerged as important electoral campaigning tools. The impact of social media campaigning was first evident during the 2008 American elections. Closer to home, Kenyan President Uhuru Kenyatta’s use of social media played a pivotal role in his 2013 winning campaign.

Political Analyst, Professor Shadrack Gutto, says: “Indeed with the advent of internet, the advent of multimedia, where you have twitters, you have facebook … you have very easy-to-use and far-reaching communication ability. However, Professor Gutto warned politicians to tread carefully as one wrong statement could quickly go viral. SA election makes world headlines:Wednesday 7 May 2014. ANC supporters celebrate election victory. 2014 elections most contested since 1994:Tuesday 22 April 2014. Co- Chairperson from the National Coordinating Forum Election 2014,Nkosikhulile Nyembezi. (SABC) Co- Chairperson from the National Coordinating Forum Election 2014, Nkosikhulile Nyembezi, says that this year's election is promising to be the most contested election since the dawn of democracy. Political parties are campaigning across the country convincing their constituencies that they will deliver on their promises should they vote them into power on May 7.

In a Morning Live interview, he says that it remains to be seen if the election would live up to the hype that it has created thus far. He says that the “born frees” have not registered in their numbers like it was hoped for, but it’s still okay as most of their peers have registered to vote. Vote No” campaign was just a diversion to confuse voters “Voters should be cautious and cast their votes wisely at the elections poll and vote with a sound mind,” says Nyembezi. Nyembezi has encouraged the youth to go and vote. Malema commends SA for peaceful elections:Saturday 10 May 2014. Economic Freedom Fighters leader Julius Malema. We are ready for May 7: IEC. Bekkersdal residents threaten to boycott elections. New President to be inaugurated on May 24 at Union Buildings:Wednesday 21 May 2014.

AU declares SA elections free and fair:Friday 9 May 2014. Ghanaian former President John Kuffour has urged other African countries to emulate South Africa in staging credible elections. The first voting district results announced:Wednesday 7 May 2014. South Africans went to the polls on Wednesday. Zuma addressed thousands at ANC's siyanqoba rally in Soweto. ANC final rally at FNB stadium. Think carefully when you vote: Tony Leon. IEC cut-off-date on objections:Monday 7 April 2014. In terms of the Electoral Act, anyone, including the chief electoral officer, may object to the nomination of a candidate. (SABC) Monday, April 7, marks the cut-off-date for the Independent Electoral Office on decisions on objections and notification to objectors and parties. By cut-off-date for submissions of objections last week, the IEC had received 40 objections to National Assembly and provincial legislature election candidates.

President Jacob Zuma’s name was among those who had been objected against. Kasrils to launch ‘No Vote’ campaign:Sunday 13 April 2014.