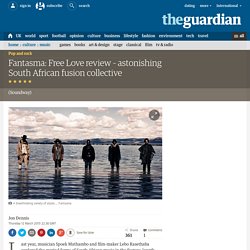 ElectricJive. ... The African Cypher Official Trailer #1 (2012) - Dance Documentary HD. The Chimurenga Chronic. The Forest and the Zoo* (Aryan Kaganof with Johnny Mbizo Dyani) * Johnny Dyani Interview: 22-23 December 1985 I was 19 years old when I left South Africa to avoid being conscripted into the apartheid army. 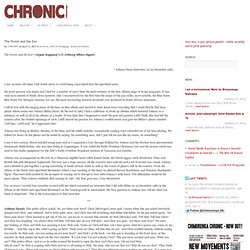 My great passion was music and I had for a number of years been the head reviewer of the New Albums page of Scope magazine. It was only once outside of South Africa however, that I encountered for the first time the music of the jazz exiles, most notably, the Blue Notes. Blue Notes For Mongezi remains, for me, the most excoriating musical document ever produced by South African musicians. I fell in love with the singing tones of the bass on that album and started to hunt down every recording that I could find by that bass player whose name was Johnny Mbizo Dyani.

Johnny was living in Malmo, Sweden, at the time, and his subtly melodic, occasionally rasping voice reminded me of his bass playing. Johnny Dyani: This police officer asked, ‘So, are these your boys?’ AK: They lived with them… Bembeya Jazz - Petit Sekou. 1979. K’naan, on Censoring Himself For Success.

Reviving the Radio Tanzania Archives. From The Archive: Radio Tanzania. *All photos by Jonathan Kalan In a non-descript, shabby building on the outskirts of Dar es Salaam lies the headquarters of the Tanzania Broadcasting Corporation. 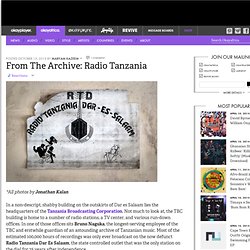 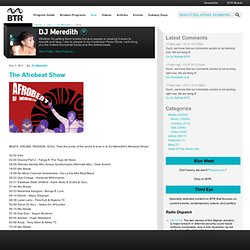 DRUMS. PASSION. SOUL. Philip Tabane And His Malombo Jazzman-The Indigenous Afro-Jazz Sounds. Giving you true notes since 247,000 BC. Franck Biyong's sounds. Lagos Disco Inferno Out Now! Available as Gatefold Double LP and on CD in an unbreakable digipack with booklet. 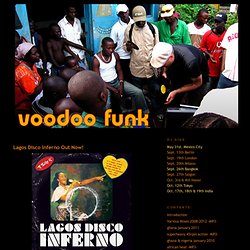 The current issue of Vice Magazine lists Lagos Disco Inferno as Best Album Of The Month! Check out this other great review we got from Dusted, or my personal favorite, this one over here at Pop Matters writen by David Maine. Buy a copy at your local record store or order one online at Academy LP mailorder, Dusty Groove or Honest Jon's in Europe. Amazon has them as well and also offers digital downloads how I have just learned. Heres the track list, click onto the highlighted tracks an check out some sound clips:

V/A- The Eyo Beats: 60 Africa 70 (Domino Sound 31 *Cassette) Yet another finely compiled cassette of crackly African gold brought to you by the good folks at Domino Sound. 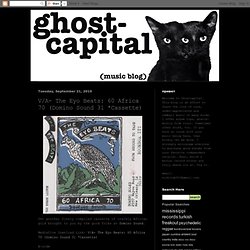 Mediafire Download Link: V/A- The Eyo Beats: 60 Africa 70 (Domino Sound 31 *Cassette) The Okayafrica Mixtape Series: AFRICA IN YOUR EARBUDS #1. When we re-launched Okayafrica this March (or launched for reals, really), we asked some of our favorite peeps if they would curate a playlist or mixtape of their favorite African or African-inspired music to share with the rest of the music-loving world. To christen the series – Africa In Your Earbuds – world traveling DJ, producer, writer, and Dutty Artz crew member Chief Boima (who is currently somewhere in Liberia wrapping his head around urbanism, globalization and, as some in our office would hope, daggering in Freetown not far from ancestral hometown) sent us this 40+ minutes of excellent African sounds. We’ve been bumping it non-stop. It also is stands as the first installment of the new Ghetto Palms Redux column over at our good friends The Fader, written by Okayplayer’s own Eddie Stats.

Here’s what Eddie has to say about Boima’s choices – and we’re not saying it ourselves, cuz it couldn’t be said better: Galaxy Around Olodumare, An Ilé Oxumaré Compilation. Podcast - DJ 4TH WURLD presents...The Shrine! What Egypt’s revolution tells us about the nature of social media. And this is how it started on January 25th !! "Updated : With Video" This is how it began on January 25th when the police forces attack the protesters at Tahrir square at night after midnight and this is why I am so scared now !! 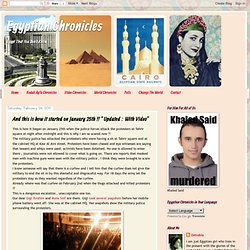 The military police has attacked the protesters who were having a sit at Tahrir square and at the cabinet HQ at Kasr Al Aini street. Protesters have been chased and eye witnesses are saying that teasers and whips were used, activists have been detained. No one is allowed to enter there , journalists were not allowed to cover what is going on. A Fractal Gallery. Salif Keita. *** VOODOOFUNK ***