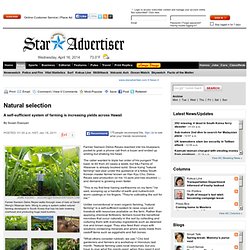 Landowner David Wong, below, stands next to towering kalo and huge basil bushes. Farmer Samson Delos Reyes reached into his bluejeans pocket to grab a phone call from a buyer and ended up smiling but shaking his head. The caller wanted to triple her order of his pungent Thai basil, to 60 from 20 cases a week, but S&J Farms of Waianae is already booked solid. Close the Loop - Recycled Garden Glass Mulch. WWOOF - World Wide Opportunities on Organic Farms. History of Agriculture: Human Evolution & Diet, Nutrition, Crops, Sustainable Farming. 'The Worst Mistake In The History Of The Human Race' by Jared Diamond. 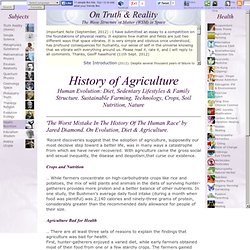 On Evolution, Diet & Agriculture. 'Recent discoveries suggest that the adoption of agriculture, supposedly our most decisive step toward a better life, was in many ways a catastrophe from which we have never recovered. With agriculture came the gross social and sexual inequality, the disease and despotism,that curse our existence. Crops and Nutrition .. Agriculture Bad for Health .. Farming, Sedentary Lifestyle & Family .. .. .. "The Worst Mistake In The History Of The Human Race" by Jared Diamond, Prof. Email this Page to a Friend! - Send a very cool philosophy / wisdom postcard - Facebook ConnectConnect in an Inter-Connected Universe!

Connect with Geoff Haselhurst at Facebook - Add as Friend "In a time of universal deceit - telling the truth is a revolutionary act. " "Hell is Truth Seen Too Late. " Help Humanity "You must be the change you wish to see in the world. " Sir Albert Howard and the scientific method « Say what, Michael Pollan? In describing the origins of organic agriculture, Pollan leans heavily on Sir Albert Howard’s An Agricultural Testament, which he calls “the movement’s bible” (145). 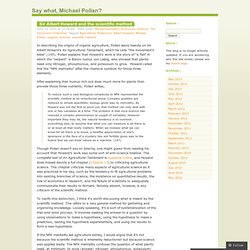 Pollan explains that Howard’s work is the story of “a Fall” in which the “serpent” is Baron Justus von Liebig, who showed that plants need only nitrogen, phosphorous, and potassium to grow. Howard called this the “NPK mentality” after the chemical symbols for those three elements. After explaining that humus-rich soil does much more for plants than provide those three nutrients, Pollan writes, To reduce such a vast biological complexity to NPK represented the scientific method at its reductionist worst. Complex qualities are reduced to simple quantities; biology gives way to chemistry. Though Pollan doesn’t say so directly, one might guess from reading his account that Howard’s work was some sort of anti-science treatise. To clarify this distinction, I think it’s worth discussing what is meant by the scientific method. Gardens. GuerrillaGardening. Granny Woman Ozark Herbs. Gardening. Shrink your URLs and get paid! Permaculture. 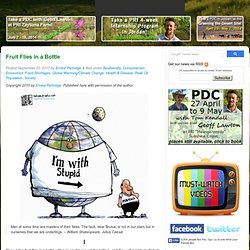 Published here with permission of the author. Men at some time are masters of their fates. The fault, dear Brutus, is not in our stars but in ourselves that we are underlings. – William Shakespeare, Julius Caesar Place a few fruit flies in a bottle with a layer of honey at the bottom, and they will quickly multiply to an enormous number, and then, just as quickly, die off to the very last, poisoned by their wastes. Similarly, add a few yeast cells to grape juice, seal the bottle, and the cells will consume the sugar and turn it into alcohol. Fruit flies and yeast in a bottle are embarked upon suicidal endeavors. Human beings, we are told, are different. Human beings have these capacities. None of the antagonists in the First World War wanted the war. Finally, consider Easter Island. In his book, Collapse, Jared Diamond poses these questions in words that strike ominously close to home: Sound familiar?

The answer, I submit, is most discouraging. Organic Architecture, Sustainable Lifestyle, Permaculture.