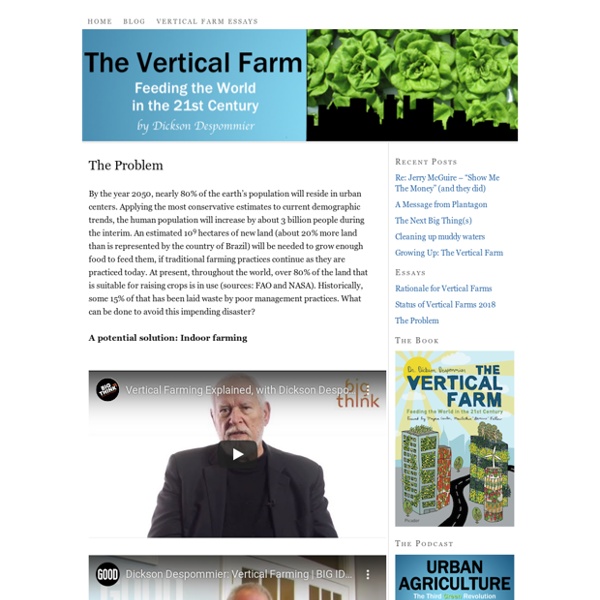 » Workshop on Challenges on Vertical Farming The Problem By the year 2050, nearly 80% of the earth's population will reside in urban centers. Applying the most conservative estimates to current demographic trends, the human population will increase by about 3 billion people during the interim. An estimated 109 hectares of new land (about 20% more land than is represented by the country of Brazil) will be needed to grow enough food to feed them, if traditional farming practices continue as they are practiced today. At present, throughout the world, over 80% of the land that is suitable for raising crops is in use (sources: FAO and NASA).

5 Ways Vertical Farms Are Changing the Way We Grow Food No soil? No problem. From Japan to Jackson, Wyoming, plucking fresh lettuce is as easy as looking up. Vertical farms have been sprouting around the world, growing crops in places where traditional agriculture would have been impossible. Vertical farms are multiple stories, often have a hydroponic system and some contain artificial lights to mimic the sun. These green hubs are attractive in a variety of ways since food can be produced with less water (since it just recirculates), creates less waste and takes up less space than traditional farming, ultimately leaving a smaller footprint on the environment.

- City Farms, Parks and Boston: Let’s Grow Up Vertical Farm, photo credited to Valcent via www.economist.com It’s been days since Edward Glaeser published his urban farm-bashing piece in the Boston Globe, but I’m still annoyed. Glaeser, a professor of economics at Harvard University and director of the Rappaport Institute for Greater Boston, managed to argue against farms in a way that could extend to urban parks, gardens, zoos, swimming pools, and most sidewalks. He also ignored some intriguing trends in making urban farming more efficient, a.k.a. the Vertical Farm.

How to build My 50 Dollar Greenhouse First off – you really can build this thing very cheaply, but to do so you have to recycle, freecycle, and scrounge. If you just go out and buy new everything it will probably cost over $200 – still not bad all in all.This Article is featured in Jan 2010 issue of Birds and Blooms Magazine!Want to find out if this thing works before you read all this? Read 6 months in the Greenhouse first.Want to see what happens when a few inches of wet snow accumulates on this? WHAT IS VERTICAL FARMING?WHAT IS HYDROPONICS?WHAT ARE MICRO NUTRIENTS?ADVANTAGES OF VERTICAL FARMING? FOR PRELIMS AND MAINS GS PAP III Ø Yes it's vertical because you are trying to grow more crops on a smaller land area and this usually means going upwards into buildings Ø It normally means that, instead of having a single layer of crops over a large land area, you have stacks of crops going upwards Ø It's also associated with city farming and urban farming Ø Who is "Dickson Despommier"? Ø Who is William Frederick Gericke?

Grow a Living Wall Cool Copper Projects Warm metallic hues are easy to love but often pricey. When you create the look... Easy Doily Bowl Craft a decorative bowl from a doily picked up from a flea market, antique... Indoor Farming Industry Is Growing Fast As experts warn of a coming food crisis, the vertical farming industry aims to create plants that offer more nutritional value and require fewer resources. In vertical farms, plants are grown indoors. Each set of plants is stacked on another. Workers control the climate and closely monitor each plant’s growth. TCLocal: food Archives by Persephone Doliner What Is Processed Food? To process food is to make parts of plants and animals more edible than they would be in their unprocessed state. Farmers Markets Farmers markets are an integral part of the urban/farm linkage and have continued to rise in popularity, mostly due to the growing consumer interest in obtaining fresh products directly from the farm. Farmers markets allow consumers to have access to locally grown, farm fresh produce, enables farmers the opportunity to develop a personal relationship with their customers, and cultivate consumer loyalty with the farmers who grows the produce. Direct marketing of farm products through farmers markets continues to be an important sales outlet for agricultural producers nationwide. As of National Farmers Market Week, (the first full week in August), there were 8,144 farmers markets listed in USDA’s National Farmers Market Directory.

This Week in Virology - The Vertical Farm: Feeding the World in the 21st Century Product Description "The vertical farm is a world-changing innovation whose time has come. Dickson Despommier's visionary book provides a blueprint for securing the world's food supply and at the same time solving one of the gravest environmental crises facing us today."--Sting Plant an Edible Forest Garden Related Content Plant Edible Ground Cover You can sneak a few attractive, low maintenance food plants onto your lawn, and your neighbors will ... Permaculture 2012

World's largest Indoor vertical farm to produce greens without sun, soil or water The world's largest, and possibly most sophisticated indoor farm -- where greens grow without sun, soil or water. Well, almost no water. AeroFarms, the company behind the venture, say they will use 95% less water than a conventional outdoor farm. 180° Shift: When Local Means Your Kitchen Blanchet: My name’s Gabe Blanchet, I’m co-founder and CEO at Grove Labs. It’s a pleasure to be here. To start this off I’d like to see a show of hands, how many people in here have grown a plant? A windowsill basil plant all the way to a full-fledged farm? Awesome. How to Grow 100 Pounds of Potatoes in 4 Square Feet On many occasions, we've been tempted to grow our own potatoes. They're fairly low maintenance, can be grown in a pot or in the ground, last a fairly long time if stored properly, and can be very nutritious (high in potassium and vitamin C). Here's more incentive: according to this article, you can grow 100 pounds of potatoes in 4 sq. feet. Learn how after the jump...

In Newark, a Vertical Indoor Farm Helps Anchor an Area’s Revival Scheduled to open this fall inside the new Ironbound site, AeroFarms projects it will reap up to 30 harvests a year, or two million pounds of greens, including kale, arugula and romaine lettuce, Mr. Rosenberg said. At that output, AeroFarms would be among the most productive vertical farms in the country, analysts say.