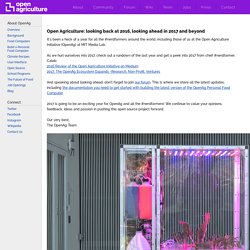 October 28, 2015 It’s members’ week here at the MIT Media Lab, and the building is filled with friends of the farm! We hosted a cocktail party for Media Lab affiliates, investors, members of other Media Lab groups, and more! Alongside our storage container-sized Food Server, we showed off our full fleet of eight prototype Personal Food Computers […] Read the full article → Give the teachers what they want! October 27, 2015 At our recent teacher meetup at the MIT Media Lab, we had the chance to chat with the pioneer teachers and students who have been using our Food Computers to grow food in their their classrooms. Electronic plants created. Researchers at Linköping University in Sweden have created analog and digital electronics circuits inside living plants. 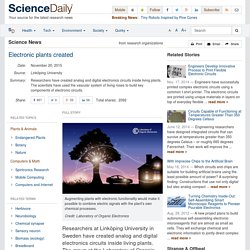 The group at the Laboratory of Organic Electronics (LOE), under the leadership of Professor Magnus Berggren, have used the vascular system of living roses to build key components of electronic circuits. The article featured in the journal Science Advances demonstrates wires, digital logic, and even displays elements -- fabricated inside the plants -- that could develop new applications for organic electronics and new tools in plant science. Plants are complex organisms that rely on the transport of ionic signals and hormones to perform necessary functions. However, plants operate on a much slower time scale making interacting with and studying plants difficult. Augmenting plants with electronic functionality would make it possible to combine electric signals with the plant's own chemical processes.

Dr. The Next Wave of Automated Farming - DZone IoT. The IoT Zone is brought to you in partnership with ThingWorx. 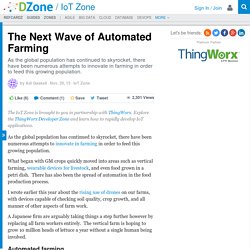 Explore the ThingWorx Developer Zone and learn how to rapidly develop IoT applications. As the global population has continued to skyrocket, there have been numerous attempts to innovate in farming in order to feed this growing population. What began with GM crops quickly moved into areas such as vertical farming, wearable devices for livestock, and even food grown in a petri dish. There has also been the spread of automation in the food production process. I wrote earlier this year about the rising use of drones on our farms, with devices capable of checking soil quality, crop growth, and all manner of other aspects of farm work.

A Japanese firm are arguably taking things a step further however by replacing all farm workers entirely. Automated farming The whole process of growing the lettuce will be automated, from germination through to harvesting and delivery. The company is no stranger to ‘artificial’ farming. Topics: Electronics, Controllers, & Hydroponics. Food Computers. The Food Computer is a controlled-environment agriculture technology platform that uses robotic systems to control and monitor climate, energy, and plant growth inside of a specialized growing chamber. 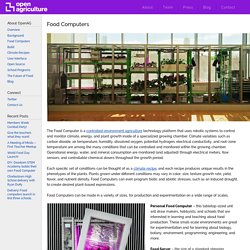 Climate variables such as carbon dioxide, air temperature, humidity, dissolved oxygen, potential hydrogen, electrical conductivity, and root-zone temperature are among the many conditions that can be controlled and monitored within the growing chamber. Operational energy, water, and mineral consumption are monitored (and adjusted) through electrical meters, flow sensors, and controllable chemical dosers throughout the growth period. Each specific set of conditions can be thought of as a climate recipe, and each recipe produces unique results in the phenotypes of the plants. Climate Recipes. In the current industrialized food production network, large, crop-specific farms often grow massive amounts of a product and ship it around the globe. 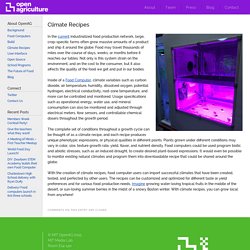 Food may travel thousands of miles over the course of days, weeks, or months before it reaches our tables. Build. What does it take to build an OpenAg Personal Food Computer (PFC)? 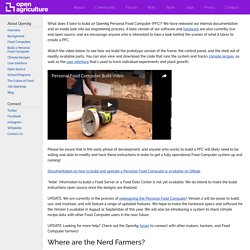 We have released our internal documentation and an inside look into our engineering process. A beta version of our software and hardware are also currently live and open source, and we encourage anyone who is interested to take a look behind the scenes of what it takes to create a PFC. Watch the video below to see how we build the prototype version of the frame, the control panel, and the shell out of readily available parts.

You can also view and download the code that runs the system and tracks climate recipes, as well as the user interface that’s used to track individual experiments and plant growth. Please be aware that in this early phase of development, and anyone who wants to build a PFC will likely need to be willing and able to modify and hack these instructions in order to get a fully operational Food Computer system up and running! UPDATE: Looking for more help? User Interface. Open Agriculture Initiative.