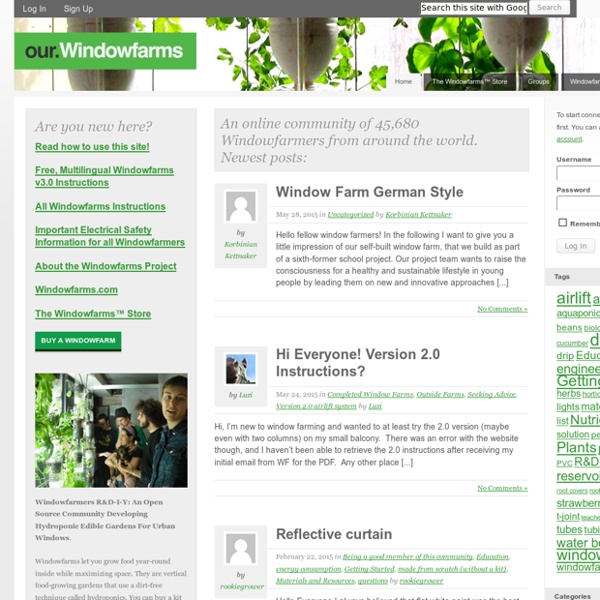 Windowfarmers R&D-I-Y: An Open Source Community Developing Hydroponic Edible Gardens For Urban Windows. Windowfarms let you grow food year-round inside while maximizing space. They are vertical food-growing gardens that use a dirt-free technique called hydroponics. You can buy a kit or build your own using low-impact or recycled local materials. Having a windowfarm is more about the activity and experience of windowfarming, these are living systems, not just a pretty thing to look at. This site is the online community of windowfarmers around the world.

Window Farms It all started when Britta Riley decided to build a mini-garden in a Brooklyn window, creating a low-maintenance and self-sufficient alternative to consuming. We’ve been fans of Window Farm‘s edible gardens for long while, and just in time for the holiday season the team has evolved their fantastic gardening systems to create a brand new stand-up version of their original microfarms. These mini-gardens can hang in columns or stand on the sill, allowing you to grow fresh vegetables, herbs, and leafy treats in practically any space. Britta Riley‘s vertical hydroponic Window Farm systems are a boon for space-starved urban dwellers looking to start their own garden. TreeHugger © Philip Houiellebecq Rising food prices and a yearning for a bit of homegrown green may be some of the reasons why city dwellers turn to gardening. But for those who lack land to actually grow food on, do-it-yourself ideas like windowfarming can be a revelation -- especially when all you have is some window sill space. Aimed at those who are looking to try out windowfarming, but are reluctant about spending hours building their own system, British product designer Philip Houiellebecq's conceptual hydroponic growing system Auxano offers the ease of similar DIY windowfarms -- and without relying on electricity and the guesswork involved with other systems we've featured previously like Urbio.

Window Farms Org 1) Translated by: Windowfarms Core Team. Welcome to the Instructions for MAMA! The Windowfarms Version 3.0 Modular Airlift Multicolumn Array (MAMA). Please make sure you have registered on our.windowfarms.org, including having accepted the terms of service for participating in this open design community project. Open field system Generic map of a medieval manor, showing strip farming, from William R. Shepherd, Historical Atlas, 1923 The open-field system was the prevalent agricultural system in much of Europe during the Middle Ages and lasted into the 20th century in parts of western Europe, Russia, Iran and Turkey.[1] Under the open-field system, each manor or village had two or three large fields, usually several hundred acres each, which were divided into many narrow strips of land. The strips or selions were cultivated by individuals or peasant families, often called tenants or serfs.

Climate Impacts Group The Climate Impacts Group (CIG) is an internationally recognized interdisciplinary research group studying the impacts of natural climate variability and global climate change (“global warming”). Research at the CIG considers climate impacts at spatial scales ranging from local communities to the entire western U.S. region, with most work focused on the Pacific Northwest (PNW). Through research and interaction with stakeholders, the CIG works to increase community and ecosystem resilience to fluctuations in climate. The CIG focuses on the intersection of climate science and public policy/resource management. Window Farms A Windowfarm is a vertical, indoor garden kit that allows for year-round growing in almost any window. It lets plants use natural window light, the climate control of your living space, and organic “liquid soil.” In the hydroponic system, nutrient-spiked water is pumped up from a reservoir at the base of the system and trickles down from bottle to bottle, bathing the roots along the way.

How to: WF Version 2.0 Standing AirLift Mini (SAM) These are UPDATED instructions that show you how to make a ‘mini’ 1 hour build- The easiest, cheapest, smallest windowfarm. Gets you started on hydroponics ASAP! This version is designed to be easy to assemble for folks who want to try out a windowfarm but are not quite ready to build the structure needed for larger windowfarms. This system can grow three plants. Windowfarms let you garden - appropriately enough - in your windows Whereas the majority of vertical farming concepts and projects featured in Gizmag over the years have either been huge dedicated structures or add-ons to existing buildings, the Windowfarms system downsizes and personalizes veggie growing by placing an indoor farm in the window. The original plastic-bottle-based, do-it-yourself hydroponics system design has been available for a while now but the developers are getting ready to make a new, improved kit version available. View all The Windowfarms system was first developed by Britta Riley after reading an article in the New York Times about growing your own food. Living in a Brooklyn apartment building somewhat limited the amount of space on offer to the urban farmer so Riley began working with Rebecca Bray on a vertical hydroponics home farm system capable of year-round growing in almost any window.

OSCAR - Open Source Simple Computer for Agriculture in Rural Areas Our main sources of inspiration for this project. The philosophy of free software advocated by GNU and a hardware open source initiative by Simputer Trust sparked the basic idea for an open source project. www.gnu.org Puget Sound Partnership - Vital Signs Puget Sound Partnership Dashboard of Vital Signs: Charting our Course and Measuring Our Progress Puget Sound, while one of the most vibrant and complex regions in the nation, is at the same time one of the most fragile ecosystems in the world. It is a place of beauty and wonder that we want to protect now and for generations to come. The Sound covers some 2,500 square miles, larger than the states of Delaware or Rhode Island, and is the drainage basin for more than 16,000 square miles. The Sound includes thousands of rivers and streams, rich forests, numerous plantlife, and numerous wildlife species including the iconic wild salmon and Orca whale.