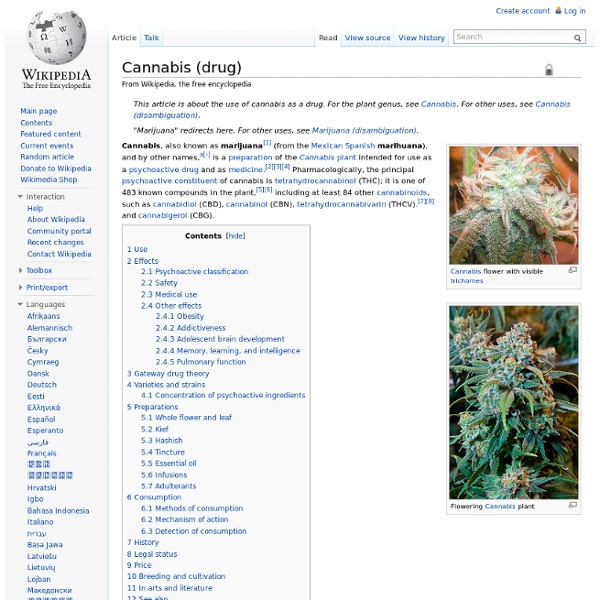 Cannabis is often consumed for its psychoactive and physiological effects, which can include heightened mood or euphoria, relaxation,[10] and an increase in appetite.[11] Unwanted side-effects can sometimes include a decrease in short-term memory, dry mouth, impaired motor skills, reddening of the eyes,[10] and feelings of paranoia or anxiety.[12] Effects Main short-term physical effects of cannabis A 2013 literature review said that exposure to marijuana had biologically-based physical, mental, behavioral and social health consequences and was "associated with diseases of the liver (particularly with co-existing hepatitis C), lungs, heart, and vasculature".[21] The medicinal value of cannabis is disputed. The American Society of Addiction Medicine dismisses the concept of medical cannabis because the plant fails to meet its standard requirements for approved medicines. Neurological Gateway drug Safety Varieties and strains Types of cannabis Concentration of psychoactive ingredients Preparations

Legality of cannabis The medicinal use of cannabis is legal in a number of countries, including Canada, the Czech Republic and Israel. While federal law in the United States bans all sale and possession of cannabis, enforcement varies widely at the state level and some states have established medicinal marijuana programs that contradict federal law—Colorado and Washington have repealed their laws prohibiting the recreational use of cannabis, and have instated a regulatory regime that is contrary to federal statutes.[6][7] Currently Bangladesh, North Korea, Czech Republic, Portugal, Uruguay, the Netherlands, and the United States (Washington and Colorado) have the least restrictive cannabis laws while China, Indonesia, Japan, Sweden, Turkey, France, Singapore, Malaysia, South Korea and the United Arab Emirates have the strictest cannabis laws. Worldwide, marijuana is the most popularly used illegal drug.[9] History[edit] Cannabis has been in use for thousands of years.

Cannabinoid receptor CB1 and CB2 structures. There are currently two known subtypes of cannabinoid receptors, termed CB1 and CB2.[5][6] The CB1 receptor is expressed mainly in the brain (central nervous system or "CNS"), but also in the lungs, liver and kidneys. The CB2 receptor is expressed mainly in the immune system and in hematopoietic cells.[7] Mounting evidence suggests that there are novel cannabinoid receptors[8] that is, non-CB1 and non-CB2, which are expressed in endothelial cells and in the CNS. In 2007, the binding of several cannabinoids to a G protein-coupled receptor (GPCR) in the brain was described.[9] The protein sequences of CB1 and CB2 receptors are about 44% similar.[10] When only the transmembrane regions of the receptors are considered, amino acid similarity between the two receptor subtypes is approximately 68%.[4] In addition, minor variations in each receptor have been identified.

Drink Marijuana Tea for a healthy heart Tea is a popular drink, and it can soothe the soul, help you sleep, and some kinds of tea are even good for a healthy heart. The popularity of tea has really risen over the last decade or so, with a lot of people choosing to drink it over things like soda, juice, or coffee. Many people may not realize that there is such a thing called marijuana tea. It is made from, you guessed it, marijuana! It is made fairly easily, simply by infusing marijuana into hot water. Cannabis Etymology The word cannabis is from Greek κάνναβις (kánnabis) (see Latin cannabis),[4] which was originally Scythian or Thracian.[5] It is related to the Persian kanab, the English canvas and possibly even to the English hemp (Old English hænep).[5] In modern Hebrew, קַנַּבּוֹס qannabōs modern pronunciation: [kanaˈbos] is used but מַעֲלֶה עָשָׁן maʿăleh ʿāšān modern pronunciation: [ma.aˈle aˈʃan] (smoke bringer) is the ancient term. Old Akkadian qunnabtu, Neo-Assyrian and Neo-Babylonian qunnabu were used to refer to the plant meaning "a way to produce smoke."[6][7][8]

Annual cannabis use by country World map of annual cannabis prevalence Table[edit] The primary source of information is the World Drug Report 2011 (WDR 2011),[1] some older numbers are from the World Drug Report 2006 (WDR 2006),[2] published by the United Nations Office on Drugs and Crime (UNODC). See also[edit] Memory Overview of the forms and functions of memory in the sciences In psychology, memory is the process in which information is encoded, stored, and retrieved. Encoding allows information that is from the outside world to reach our senses in the forms of chemical and physical stimuli. In this first stage we must change the information so that we may put the memory into the encoding process.

The healing power of : Marijuana (6) No I didn't forget on my favorite 'vegetable', here it is: Cannabis Sativa is medicine and hope for a dying planet.... Marijuana, also known as Mary Jane, pot, reefer, grass, ganja, damo, 'a smoke', weed or bhang, is a non-toxic, non-addictive herbal plant that humans have used in a wide variety of applications from our earliest recorded history. Marijuana’s legacy includes a colorful history of diverse peoples and their intimate relationships with “Mary Jane.” Cannabis (disambiguation) From Wikipedia, the free encyclopedia Cannabis may refer to: Cannabis, a genus of flowering plants that includes three taxa: Cannabis Culture LIVE at Oaksterdam for the Califo on USTREAM: CANNABIS CULTURE - Californians will go to the polls on Tuesday, November 2 for the historic Ustream © Search Log in / Sign up With Facebook (faster) Log in or sign up with Facebook See what your friends like and watch, get awesome recommendations Instant login, no passwords

Mood (psychology) A mood is an emotional state. Moods differ from emotions in that they are less specific, less intense, and less likely to be triggered by a particular stimulus or event. Moods generally have either a positive or negative valence. In other words, people typically speak of being in a good mood or a bad mood.