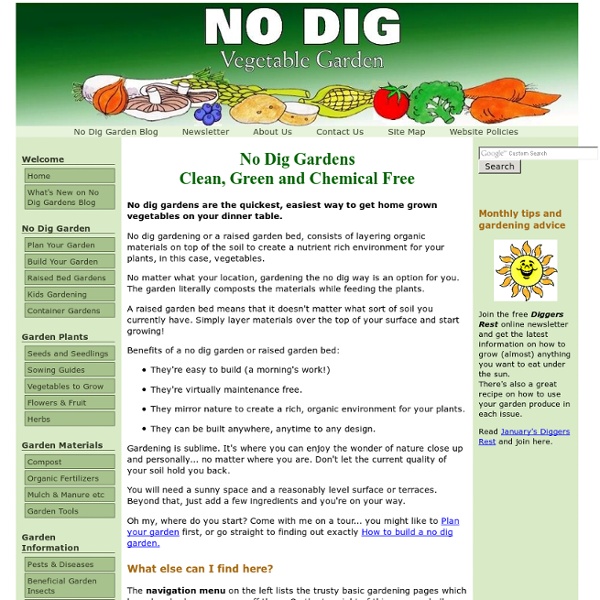 No dig gardens are the quickest, easiest way to get home grown vegetables on your dinner table. No dig gardening or a raised garden bed, consists of layering organic materials on top of the soil to create a nutrient rich environment for your plants, in this case, vegetables. No matter what your location, gardening the no dig way is an option for you. The garden literally composts the materials while feeding the plants. A raised garden bed means that it doesn't matter what sort of soil you currently have. Simply layer materials over the top of your surface and start growing!

HomeDecor The principle is simple and seductively clever: solar lights that store energy during the day and release light at night. These can be purchased ready-made in a variety of colors (yellow, blue and red) but they can also be built at home. A simple, less-technical approach involves buying a conventional solar-powered yard lamp and then essentially harvesting it for key pieces to put in a jar. This is simply a way of taking an existing solar lamp design and appropriating its parts to make something more attractive for display around a house or home. Constantly Tired? Here Are 10 Herbs To Increase Energy, Vitality, And Adaptability by JOHN SUMMERLY How difficult is it for us to achieve a work-life balance? How much more difficult is it to achieve a life-energy balance?

4 Simple Steps to Grow a Hundred Pounds of Potatoes in a Barrel Container gardening isn't only for savvy urban gardeners and folks with limited space to grow, it can also be for folks who want to maximize their yields in a controlled environment. Not only does growing potatoes in a barrel reduce the amount of weeding and exposure to pests and fungi, you don't even have to risk shovel-damage to the tender potatoes by digging them out of the ground when they're done, just tip the container over! After extensive research to plan my own potatoes-in-a-barrel, I've boiled all of the recommendations down to 4 simple steps to a winning potato harvest. Geek fun: Twisted Architecture I didn’t set out to tie knots in Norman Foster’s Hearst Tower or wrinkle his Gherkin, but I got carried away. It’s one of the occupational hazards of working with Mathematica. It started with an innocent experiment in lofting, a technique also known as “skinning” that originated in boat-building. I wanted to explore some three-dimensional forms, and a basic lofting function seemed like a quick ticket to results. I dashed off the function Loft, which takes a stack of three-dimensional contours and covers it with a skin of polygons. Loft uses Mathematica‘s GraphicsComplex primitive to factor out the geometries of the polygons from their topologies.

DIY: How To Store & Make Your Own Herbal Remedies by AMY JIRSA Back in the olden days (and even in the not-so-olden past and present homesteading days), a stillroom was a necessity in every rural home. This was a designated space (think a modern-day pantry of sorts) which housed herbs, jars, recipe books, tinctures, teas, and preserving agents (like alcohol, honey, and vinegar). This room was where the woman of the house (yes, most often it was the woman) created cosmetics, home brews, preserves, and a year’s worth (at least) of herby medicinals.

Farmscaping "Farmscaping" is a holistic approach to pest control on farms that focuses on increasing biodiversity in order to maintain healthy populations of beneficial insects, birds, bats, and other wildlife as part of an ecological pest management program. Farmscaping often treats beneficial wildlife as a kind of "minature livestock" that must be managed and provided for for just like cows, sheep, chickens, and other farm animals. Farmscapers use observation and science to plan hedgerows, flower beds, cover crops, and water reservoirs to favor beneficial wildlife over pests. Benefits of Farmscaping Farmscaping reduces the need for pesticides, lowering costs and reducing exposure to potentially harmful chemicals by farmworkers and consumers. Farmscaping is also simple and generally inexpensive to implement.

Blog : The Ongoing Stock Market Crash The ongoing gyrations of the stock market over the past few months have spread panic not just throughout the markets, but into the rest of the economy and the political sphere. There are some who assert that this is due to the recent downgrade of the American credit rating by Standard & Poor’s (S&P), but an analysis with Mathematica suggests that other factors may be at play. Using the FinancialBond function for a zero-coupon continuously compounding bond price, we discover the inverse relation between bond prices and yields (y) given below. As the bond price increases, the yield y decreases.