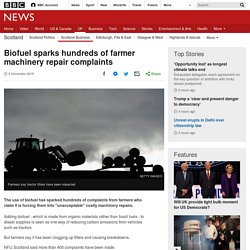 The future of upland farming in the UK: what farmers are facing. This post is by Chris Clark of Nethergill Farm. 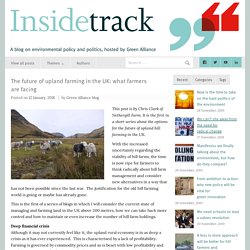 It is the first in a short series about the options for the future of upland hill farming in the UK. With the increased uncertainty regarding the viability of hill farms, the time is now ripe for farmers to think radically about hill farm management and consider new alternatives in a way that has not been possible since the last war. The justification for the old hill farming world is going or maybe has already gone. This is the first of a series of blogs in which I will consider the current state of managing and farming land in the UK above 200 metres, how we can take back more control and how to maintain or even increase the number of hill farm holdings.

Food Miles Calculator. The future of food. 6 Amazing Global Agriculture Maps - Farming Visualized - GIS Geography. Last Updated: Jun 19, 2019 @ 5:27 am Visualizing Farming with Agriculture Maps Ever wonder where your food comes from? We have 6 agriculture maps to show you the answer. Almost every bit of the food we eat is grown and gathered on farms.

The Future of Farming. Scottish Natural Heritage. Much of the variety and interest of Scotland’s landscapes, habitats and wildlife has been created by generations of farmers and crofters working on the land. 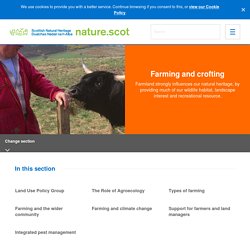 Farming is a major land use in Scotland, with 75% of our land area devoted to agriculture. Our four main types of farming have different impacts on our nature and landscapes. Hill farming benefits biodiversity, for example, while dairy and meat production is linked to lower biodiversity and higher pollution risks. Agriculture may offer some ways to help tackle climate change. Epic sheep scenario planning report final. Bananasplit. Organic farming: snakes and ladders. Comic strip 1. The future of food: Why farming is moving indoors. Image copyright Square Roots A car park opposite the infamous New York City housing estate where rapper Jay-Z grew up seems an unlikely place for an agricultural revolution. 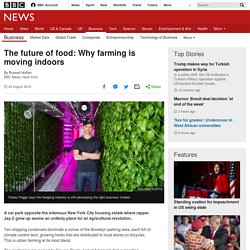 Ten shipping containers dominate a corner of the Brooklyn parking area, each full of climate control tech, growing herbs that are distributed to local stores on bicycles. Signposts for Global Citizenship - Food and farming resources. Animation showing the changes in national total greenhouse gas emissions by country from 1850 to 2016. Data source: PRIMAP-hist v2.0. Third of Britons have stopped or reduced eating meat - report. One in eight Britons are now vegetarian or vegan, according to a report on food shopping that underlines a revolution in the UK’s eating habits. 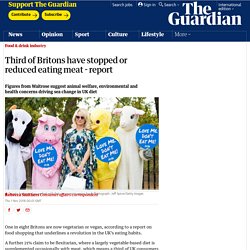 A further 21% claim to be flexitarian, where a largely vegetable-based diet is supplemented occasionally with meat, which means a third of UK consumers have deliberately reduced the amount of meat they eat or removed it from their diet entirely. These are all the problems with Iceland's banned Christmas advert. BBC iPlayer - Disclosure - Series 1: 2. The Dark Side of Dairy. "Edible Histories" Playlist - BBC Ideas. The UK's obsession with avocados is helping to destroy communities on the other side of the world. Financial Times - New data shows that dozens of regions... Rural - GeoResource. China cut fertilizer use and still increased crop yields. This is how they did it. Millions of Chinese farmers are reaping the benefits of a massive agricultural study, which has helped them increase their crop yields whilst reducing the use of fertilizer. 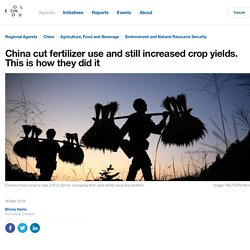 Specific, evidence-based recommendations were made to 21 million Chinese farmers over a decade, offering them detailed advice about which variety of crop to use, exactly the best time to plant, how many seeds to sow and how much fertilizer to use. The detailed guidance led to an increase in the amount of maize, wheat and rice produced, with crop yields increasing at an average of 11%. Meanwhile, fertilizer use was reduced by an average of 15% per crop, saving 1.2 million tonnes of nitrogen, according to the study published in Nature. When nature says 'Enough!': the river that appeared overnight in Argentina.

After a night of heavy rainfall, Ana Risatti woke to an ominous roar outside her home. 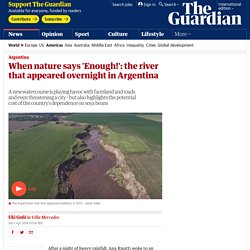 Mistaking the noise for a continuation of the night’s downpour, she stepped outside to look. “I nearly fainted when I saw what it really was,” said Risatti, 71. Does GMO corn increase crop yields? 21 years of data confirm it does—and provides substantial health benefits. While many studies show that genetically modified crops contribute to yield gains, GMO critics say that they don’t. 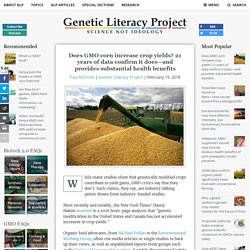 Such claims, they say, are industry talking points drawn from industry-funded studies. Most recently and notably, the New York Times' Danny Hakim asserted in a 2016 front-page analysis that "genetic modification in the United States and Canada has not accelerated increases in crop yields. " Coca-Cola And Nestlé To Privatize The Largest Reserve Of Water In South America. By Amanda Froelich Truth Theory Private companies such as Coca-Cola and Nestlé are allegedly in the process of privatizing the largest reserve of water, known as the Guarani Aquifer, in South America. 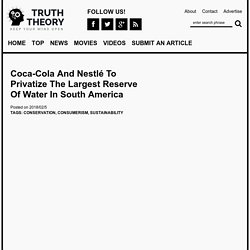 The aquifer is located beneath the surface of Brazil, Argentina, Paraguay and Uruguay and is the second largest-known aquifer system in the world. Reported by Correiodo Brasil the major transnational conglomerates are “striding forward” with their negotiations to privatize the aquifer system. Meetings have already been reserved with authorities of the current government, such as Michel Temer, to outline procedures required for private companies to exploit the water sources.

The concession contracts will last more than 100 years. Why do people still go hungry? – video. Water scarcity. Chocolate is on track to go extinct in 40 years. Innovative Genomics Institute / University of California at Berkeley Cacao plants are under threat of devastation thanks to warmer temperatures and dryer weather conditions. 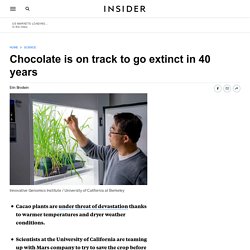 Crop to shop. How missing weather data is a 'life and death' issue. Moray farmer uses underwear to test soil fertility. 200 Million People Could Be Fed With China's New Strain Of Saltwater Rice. Chinese scientists have developed a strain of super-tough "sea rice” that farmers can grow in salty water, set to spark a rice revolution that could help feed over 200 million people. The rice was developed by the godfather of rice, Yuan Longping, at the Qingdao Saline-Alkali Tolerant Rice Research And Development Center in Qingdao on the eastern coast of China, reported Chinese state media. Back in the 1970s, Yuan was one of the first scientists to develop hybrid rice varieties. Riding on fears that the Chinese population was set to boom within the coming decades, his team helped create numerous strains of rice that grow faster, yield more, and resist more stress. Nowadays, up to 20 percent of the world’s rice comes from rice species created through his pioneering work.

"If a farmer tries to grow some types of saline-tolerant rice now, he or she most likely will get 1,500 kilograms per hectare [1,322 pounds per acre]. Best of all, it also seems to pass the test taste. Topics. Seeker - Would you give up beef if it meant saving the planet? Here’s the truth about migrant workers – we can’t live without them (From The Scottish Farmer) MANY WILL mock a soft fruit grower from the balmy Angus coast when he writes about adversity – and normally I wouldn’t blame them. In the past decade, soft fruit sales have grown 150%, while many other sectors of agriculture have struggled. I am very conscious of the problems faced elsewhere, partly because I am also a mixed farmer growing cereals and potatoes as well as running 180 Blue-Grey cows with my father and senior partner, who is still well worth his corn aged 80 – he also manages a flock of 1100 Cheviot ewes in Glen Lyon.

Don’t get me wrong, adversity isn’t always a bad thing. As well as being a positive driver for increased efficiency and yield, it can control oversupply. Facebook. Scotland’s first vertical indoor farm to be operational by Autumn 2017. The urban farmers battling Bangalore’s concrete jungle. How do you farm surrounded by concrete and millions of people?

What does urban sprawl mean for food safety and supply? Students from the University of British Columbia Graduate School of Journalism report from Bangalore in southern India. Image copyright Megan Devlin In Ramagondanahalli village, Muniraju Hanumanthappa bends over his clay-coloured soil surrounded by bright green spinach leaves. How much food can you buy for $5 around the world? It is important to understand what the average worker in each country would make in dollars each year. Per Capita Gross National Income or GNI is a fancy way of saying average income. George Takei - The idea is growing on me. via NowThis Future. The Cost of Beef. World Water Day 2017: 60 powerful photos to make you think twice about leaving the tap running. More than 650 million people, or 10% of the world's population, do not have access to safe water, putting them at risk of infectious diseases and premature death.

Pictures Show Stunning Inequality in World Water Use. Economist. PEOPLE are funny about food. Throughout history they have mocked others for eating strange things. The Good Food Learning Resource. Se connecter à Facebook. I'm Farming and I Grow It (Mobile Version) Scientists apply for GM wheat trial in UK. Image copyright ROTHAMSTED RESEARCH Researchers have applied for a licence to carry out a trial of a genetically modified wheat crop in a small field in Hertfordshire. The GM wheat converts sunlight into chemical energy (photosynthesis) more efficiently, boosting growth. ?akid=21477.3429015. Teaching the Geography of Food. By Seth Dixon, Ph.D., Assistant Professor of Geography, Rhode Island College Food. It’s something we all think about, talk about, and need. Explicit cookie consent. NOT so long ago Jean Pierre Nzabahimana planted his fields on a hillside in western Rwanda by scattering seed held back from the last harvest.

The seedlings grew up in clumps: Mr Nzabahimana, a lean, muscular man, uses his hands to convey a vaguely bushy shape. Harvesting them was not too difficult, since they did not produce much. Uk.businessinsider. Flickr. The Ad Doritos Don't Want You To See. Fighting for people over profits. Fairfood International. Future of Food - Part 1: India (BBC Documentary) Cowspiracy: The Sustainability Secret (2014) Watch and Stream Movie Online. What’s the matter with moo? Middle Eastern Organization Requests First Ever Withdrawal From The "Doomsday" Seed Vault. Huffingtonpost. The battle for the future of farming - why is the World Bank on the wrong side?

Guatemala: women lead the struggle for life, land, clean water. News feed from Ethical Consumer - Food and the future. Total control: is Monsanto unstoppable? EPA fail: refuses to ban 'brain damage' pesticide. Why cheap chocolate eggs are bad for us – and terrible for poor cocoa farmers. New Internationalist. Painting a powerful food future for Africa. Can GMOs Save Chocolate? Canadian grocer will sell ugly fruits and vegetables at a discount.

The Powerful Picture That Changed a Girl’s Life. Forget about cotton, we could be making textiles from banana and pineapple. Cotton Resources for Classrooms - Scottish Fair Trade Forum. Watch The Video That Coca-Cola And McDonald's Hope You Never See. Striking Photos Show What It's Like To Actually Live On $1 A Day Around The World. 'Hunger King' Exhibit Mocks Fast Food To Expose Global Gap Between Rich And Poor. The 'greening' of Europe's farms is a shameful failure. You Won't Guess How One Ingredient In Your Doughnuts Could Be Leaving Thousands Of People Homeless. Fairtrade accused of failing to deliver benefits to African farmworkers. Scotland Announces Total Ban on GM Crops. GM cotton really is helping to drive Indian farmers to suicide. How green are your bananas? Environmental impact of conventional cotton production. Big Progress on Global Hunger.

Map of the Day: Where People Go Hungry. Mind the fair trade gap. Wfp275057.pdf. It's time to wean ourselves off the fairytale version of farming. Can eating meat and dairy products be sustainable? Ghana's women farmers resist the G7 plan to grab Africa's seeds.