Grow Your Own Greens With The Growbot, A System Designed To Make Rooftop Farming Easy. As much as city-dwellers might like the idea of buying vegetables grown on local rooftops or vacant lots, it's hard to make urban agriculture commercially viable. 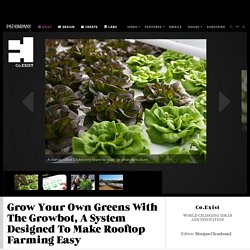 Farming actually takes a lot of work and care, and the infrastructure and workforce just aren't there in most cities to make urban agriculture happen at scale. But a startup called Cityblooms hopes to help change that. The company makes small, modular "growbots," lightweight greenhouses that can squeeze into vacant city corners and grow food more efficiently than the typical community garden. The hydroponic units are cloud-connected, so farmers can remotely track the growth of their crops, as well as control irrigation, humidity, and plant nutrition.

Unlike a neighborhood garden, the system can grow very large volumes of produce. The tiny growing units also have advantages over large greenhouses being built on some urban rooftops. "The modularity also gives us the ability to scale very easily," Halmos says. Ripe Near Me - local food, home grown vegies, neighborhood fruit. How To Start A 1-Acre, Self-Sustaining Homestead. (Mother Earth News) Expert advice on how to establish self-sufficient food production, including guidance on crop rotations, raising livestock and grazing management. 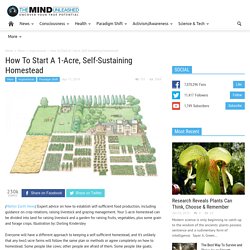 Your 1-acre homestead can be divided into land for raising livestock and a garden for raising fruits, vegetables, plus some grain and forage crops. Illustration by: Dorling Kindersley Everyone will have a different approach to keeping a self-sufficient homestead, and it’s unlikely that any two1-acre farms will follow the same plan or methods or agree completely on how to homestead.

Some people like cows; other people are afraid of them. Some people like goats; other people cannot keep them out of the garden. For myself, on a 1-acre farm of good, well-drained land, I would keep a cow and a goat, a few pigs and maybe a dozen hens. Cow or no cow? On the other hand, the food that you buy in for this family cow will cost you hundreds of dollars each year.

An ideal crop rotation might go something like this: Farming Concrete. Five Borough Farm. Cultivating a Healthy Food System. Urban Harvest - Food Gardens for Homes, Communities & Businesses. Ripe Near Me. What Will Farming Look Like in 2050? As it stands, Big Agriculture companies like Monsanto dominate the farming industry with their patented, genetically-engineered crops. 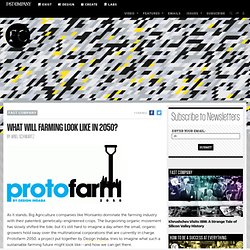 The burgeoning organic movement has slowly shifted the tide, but it's still hard to imagine a day when the small, organic growers hold sway over the multinational corporations that are currently in charge. Protofarm 2050, a project put together by Design Indaba, tries to imagine what such a sustainable farming future might look like--and how we can get there.

Protofarm 2050 acknowledges that there is no silver bullet with the problem of sustainable farming, and instead focuses on an array of scenarios that could become viable in the future. These "Farmscrapers" Are Entire Cities In Crazy, Wobbly Looking Towers. These incredible looking buildings are designed by a Belgian architect named Vincent Callebaut. 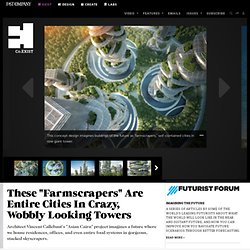 Called "Asian Cairns," after the rock stacks left on mountainsides, the "farmscrapers" are pebble-like pods stacked on top of each other. The design incorporates housing, office, and leisure spaces, as well as urban farming to reduce the need for imports from the countryside. The pebbles are made of steel rings wrapped around "horizontal double-decks," and linked to the central "spinal column. " Power, as you would expect, comes from "photovoltaic and photo thermal solar cells," and "a forest of axial wind turbines.

" Callebaut’s website spares no hyperbole describing the concept: The master plan is designed under the shape of three interlaced spirals that represent the three elements which are fire, earth, and water, all organized around air in the middle. An Urban Farm Designed To Make One Thing: A Grilled Ham And Cheese Sandwich. There's an easy way to make a grilled ham and cheese sandwich. 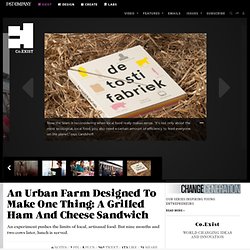 And then there's the Sandwich Factory's way. In an Amsterdam experiment that pushes the limits of urban farming, a group of young artists explored what it takes to make a simple lunch truly from scratch. After buying pigs and cows, planting a field of wheat, waiting for nine months, and spending 35,000 euros, they finally got to eat. The Sandwich Factory (De Tosti Fabriek) sowed a small field of wheat in central Amsterdam in February last year and then built a barn for two pigs and two cows (pairs, so as no animals would get lonely). For seven months, the group fed the animals and mucked out stables. It was all in pursuit of a simple "tosti," a classic grilled sandwich that can be found in any Dutch bar or cafe. The project also raised questions about how far urban farming should or could go.

"I think what the project proves is that it's completely possible, but the question is if it's sustainable," says Tjebbes.