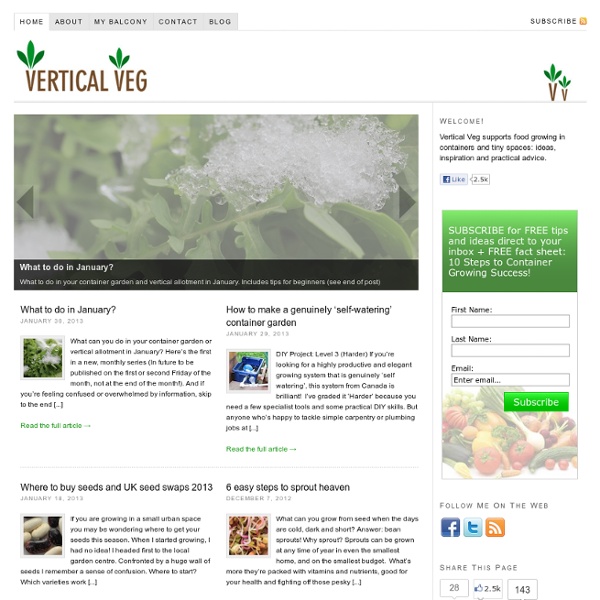 DIY Greenwalls Venelin.Petkov said... "Can you post a list of the plants you used and what nutrients are you using (I imagine you are not using pure water, since there are no minerals in the felt substrate). Thanks" Llazar said... "It would be great if could list the plants you used. People have asked me a few times now what plants I used and how I care for them. Each wall builder will need to decide how much light, water, and nutrients they want to provide. Light I have pretty good light in the room but I decided to add some supplemental light from compact fluorescent bulbs. Water I water my wall 4x a day for 10 minutes a day (by drip tube on a timer). Nutrients I added fertilizer to my wall once in the time I have had it (just because a friend gave me some to try). Work with your local plant dealer to determine the plants that are right for your wall. Here's a partial list of plants I have on my wall listed in order of quantity. Philodendron (35%) Pothos (35%) Fern (15%) Nephthytis (10%) Ivy (5%)

Manga farming 12 Apr 2010 Tokyo-based artist Koshi Kawachi recently demonstrated his "Manga Farming" technique -- which uses old manga as a growing medium for vegetables -- by cultivating a crop of radish sprouts in an installation at the Matsuzakaya department store in Nagoya. [Link: Koshi Kawachi] A GUIDE TO CHOOSING A RIPE PINEAPPLE ALTHOUGH finding a good melon is generally considered a difficult and chancy proposition, it is child's play compared to the odds one is up against when buying fresh pineapple. That stately leaf-crowned, prickly-skinned fruit with its luxurious, juicy, sweet-sour interior, offers few dependable outward clues to its inner condition, even now at its peak season. Every pineapple found beyond tropical growing areas represents a compromise for two reasons: a pineapple will never become any riper than it was when harvested and a fully ripe pineapple is too fragile to be shipped long distances. Fully ripe means a pineapple that has its full sugar content, but once it reaches that state it is subject to bruises and rot. The quality of a given pineapple, then, depends on the extent of the compromise, and second best is the very best we ever get in New York. The premium Hawaiians are transported that way by both Dole and Del Monte, the two largest shippers. Illustrations: photo of pineapples

10 Killer DIY Garden Hacks | greenUPGRADER - StumbleUpon Gardening is one of the most rewarding home hobbies you can do. It's fun, sustainable and you get healthy, tasty results. A lot of people like the idea of gardening but find excuses like it's too time consuming, it's too expensive, they don't have enough space, blah blah blah. There's no room for excuses when going green, all you need is a little initiative and a little ingenuity to overcome these so called excuses. 1. Vertical Gutter Garden When Suzanne Forsling moved to Juneau Alaska from Iowa, she found that it was a little bit harder to get her garden to grow. 2. Reclaimed Tire Garden If you have some old tires laying around that you don't know what to do with, you could burn them... if you hate the environment, or you could put them to work as cool looking raised garden beds. 3. DIY Earth Box An Earth Box is more than just a box with soil. Check out this post on Crafster.org that will show you how it's done (via Crafting a Greener World). 4. Self-Watering Garden 5. Upside Down Planters

FLIP/CITY SHANGHAI What happens if you rethink a city by flipping it from the horizontal to the vertical? FLIP/CITY proposes a new urban identity for Shanghai as a model for the development of future cities. By questioning traditional typologies, FLIP/CITY redefines methods of organizing communities by preserving the human scale. The proposal flips the horizontal cityscape to the vertical. By expanding Shanghai up along the vertical plane unused urban voids will be activated. FLIP/CITY is a new urban typology that answers the needs of modern Shanghai, its economy, social structures and ecological plans for the future while embracing Shanghai’s rich history and its citizens. THIS WORK IS LICENCED UNDER A CREATIVE COMMONS LICENCE BASED ON WORK AT www.pinkcloud.dk. Aerial view of different FLIP/CITY clusters inserted in Shanghai’s cityscape VISION Imagine a city of a unique new typology that meets the needs of its inhabitants while maximizing the quality of life and work. Eye-level view of a cluster WHY? HOW?

Growing Soursop or Guyabano (Annona muricata) Soursop (Annona muricata L.), also known as graviola, guyabano, guayabano guanabano and babana, is a shrub or small tree 3-10 meters in height. It is adapted to warm, humid tropical climate, and can tolerate both drought conditions and partial shade. This fruit crop grows in any kind of soil but prefers loose, fairly rich, deep loam and well drained soil with pH ranging from 6.1 to 6.5. It thrives well from sea level up to 300 meters above sea level although it is known to grow up to 1000 m. It has numerous uses. The fruit consists of about 67.5% edible white pulp with a pleasing fragrance and flavor. This plant is relatively safe from grazing animals. The plant also has a short juvenile phase. To grow soursop in commercial scale, the following farming methods are recommended: 1. Choose either of the two types: sweet or sour. 2. The seeds are sown in seedboxes or seedbed with sandy soil. The seedlings are ready for potting into individual containers when the first set of leaves mature.

Want Some Space For A Creative Project? Stay On A Private Island--For Free Buying a private island is a little out of reach for most people. But if you happen to be an artist--or anyone working on a creative project--and you’re looking for a quiet place to develop an idea, you might be able to temporarily try out living on a private island for free. Ideas Island, the brainchild of Swedish creativity expert Fredrik Härén, offers up two private islands near Stockholm and one in the Philippines as incubators for ideas. “My work for the last 14 years has been around inspiring people to get more and better ideas, primarily through speeches and books,” Härén explains. “I felt I wanted to give something back and do something that was tangible, different, and fun that would in itself inspire more ideas.” Härén originally owned one island, which he used as his own creative escape. After someone sends in a brief application explaining who they are and what idea they plan to explore, Härén selects several people to each get their own week on an island.

Home | Daily Dump The Story of Stuff Wind Turbine Bridge Transforms Italian Viaduct Into Public Space A bridge that repurposes abandoned viaducts, produces energy AND looks futuristically sleek? Yes, it can be true, and it is Italy’s proposed Wind Turbine Viaduct called “Solar Wind.” Southern Italy is dotted with unused viaducts, and rather than spending $50 million to tear them down, town officials near Calabria held a competition called “Solar Park South,” open to designers and engineers asking them to come up with an environmentally conscious way to re-use the existing structures. Solar Wind, conceived by the design team of Francesco Colarossi, Giovanna Saracino and Luisa Saracino, has an abundance of green benefits. Using the space between the viaduct, the team proposed installing 26 wind turbines, which would produce 36 million kilowatt hours of electricity per year! Additionally, the roadway across the bridge would be densely lined with solar cells coated in clear plastic, producing another 11.2 million kilowatt hours.

green wall - fotos - projects - mmw architects of norway As a stunt project in connection with Skien`s MerSmak-festival we designed a ”green wall” in the back yard of Lundetangen Pub, -one of the sites of the “Mosaikk” project. A bamboo scaffold, measuring 12m x 6m x 0.3m, is mounted onto the existing concrete wall mortised with plastic strips. Bamboo is for the time being an unusual material in the North, but an interesting one. The scaffold provides suspension for bags containing plants: humulus, parthenocissus, herbs and strawberry. Mersmakfestivalen See the video from the opening of the courtyard project “Mosaikk” in Skien