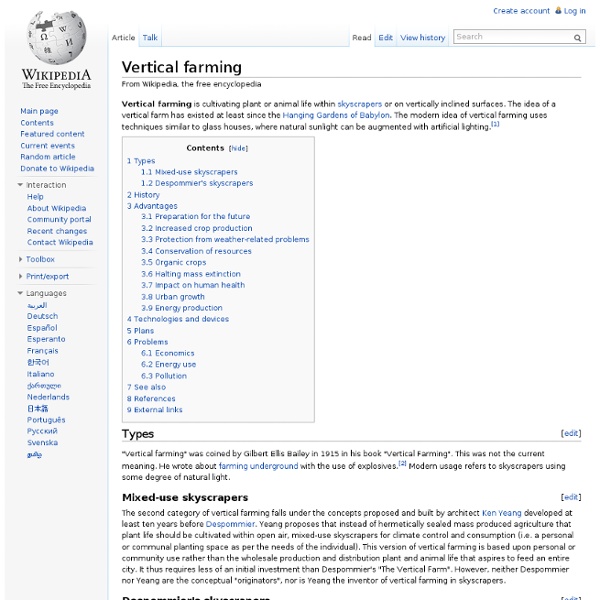 Vertical farming is cultivating plant or animal life within a skyscraper greenhouse or on vertically inclined surfaces. The modern idea of vertical farming uses techniques similar to glass houses, where natural sunlight can be augmented with artificial lighting.[1] Types[edit] "Vertical farming" was coined by Gilbert Ellis Bailey in 1915 in his book Vertical Farming. This was not the current meaning—he wrote about farming underground with the use of explosives.[2] Modern usage refers to skyscrapers using some degree of natural light. Mixed-use skyscrapers[edit] Mixed-use skyscrapers were proposed and built by architect Ken Yeang. Despommier's skyscrapers[edit] Ecologist Dickson Despommier argues that vertical farming is legitimate for environmental reasons. Vertical farming according to Despommier thus discounts the value of natural landscape in exchange for the idea of "skyscraper as spaceship". Despommier's concept of "The Vertical Farm" emerged in 1999 at Columbia University.

Vertical farming: Does it really stack up? WHEN you run out of land in a crowded city, the solution is obvious: build upwards. This simple trick makes it possible to pack huge numbers of homes and offices into a limited space such as Hong Kong, Manhattan or the City of London. Mankind now faces a similar problem on a global scale. The world's population is expected to increase to 9.1 billion by 2050, according to the UN. Feeding all those people will mean increasing food production by 70%, according to the UN's Food and Agriculture Organisation, through a combination of higher crop yields and an expansion of the area under cultivation. Such is the thinking behind vertical farming. Better still, says Dr Despommier, the use of pesticides, herbicides and fungicides can be kept to a bare minimum by growing plants indoors in a controlled environment. A wide variety of designs for vertical farms have been created by architectural firms. The necessary technology already exists. Let there be light Vertical, but only three metres tall

Controlled burn "Back-burn" redirects here. For the village in Scotland, see Backburn. An experimental burn in Canada; note the measuring equipment in front. Firing the woods in a South Carolina forest with a custom made driptorch mounted on an ATV. A prescribed burn in a Pinus nigra stand in Portugal Controlled burning of a field outside of Statesboro, Georgia, United States in preparation for spring planting Controlled or prescribed burning, also known as hazard reduction burning (HRB), backfire, or swailing, is a technique sometimes used in forest management, farming, prairie restoration or greenhouse gas abatement. In industrialized countries, controlled burning is usually overseen by fire control authorities for regulations and permits. History[edit] Controlled burns have a long history in wildland management. Fires, both naturally caused and prescribed, were once part of natural landscapes in many areas. Back burning[edit] Forest use[edit] Another consideration is the issue of fire prevention.

Vertical Gardening Ideas: Tube Planters - Gardening Gone Wild I was transformed into a lover and student of vertical gardening after seeing Patrick Blanc’s vertical wall designs years ago in a magazine. I’ve written about vertical gardening on GGW over the past few years. Since then, the field has continued to grow at a quick pace. The horticultural industry is focusing more and more on green roofs and vertical gardening, realizing that these two forms of gardening are not only environmentally beneficial but can help expand peoples’ horizons of how to create a garden when dealing with an unconventional space. In he 1980s, Pat McWhinney noticed that many rock and waterfall type projects were lacking plant life around the rock formations. Consequently, he created a unique plant system called Tube Planters. Tube planters are made of an industrial cloth: Patrick has them sown up by a seamstress into circular tubes and lengths of varying dimensions. Five tube planters secured to a latticed screen, ready to be planted.

Grow box Plants can be grown indoors year round using a grow box A grow box is a partially or completely enclosed system for raising plants indoors or in small areas. Grow boxes are used for a number of reasons, including lack of available outdoor space or the desire to grow vegetables, herbs or flowers during cold weather months. They can also help protect plants against pests or disease. Grow boxes may be soil-based or hydroponic. The most sophisticated examples are totally enclosed, and contain a built-in grow light, intake and exhaust fan system for ventilation, hydroponics system that waters the plants with nutrient-rich solution, and an odor control filter. Key growlight options include fluorescent bulbs, which offer relatively limited light output; high-intensity discharge lamps such as sodium-vapor lamps and metal-halide lamps; and light-emitting diodes bulbs, which are becoming more energy-efficient. Important basic parts of grow cabinet[edit] See also[edit] References[edit]

Growing Skyscrapers: The Rise of Vertical Farms Together the world’s 6.8 billion people use land equal in size to South America to grow food and raise livestock—an astounding agricultural footprint. And demographers predict the planet will host 9.5 billion people by 2050. Because each of us requires a minimum of 1,500 calories a day, civilization will have to cultivate another Brazil’s worth of land—2.1 billion acres—if farming continues to be practiced as it is today. Agriculture also uses 70 percent of the world’s available freshwater for irrigation, rendering it unusable for drinking as a result of contamination with fertilizers, pesticides, herbicides and silt. Select an option below: Customer Sign In *You must have purchased this issue or have a qualifying subscription to access this content

Land Manager You can use this site to search for information about a specific area or topic by selecting your 1: Region, 2: Topic, 3: Item Type and/or 4: enter a Keyword. Clicking on further topics or regions will produce new lists of information. Information produced from your search is shown both on the map and in the results list next to the map. This website was created by the NT InfoAccess program supported by Territory NRM, Charles Darwin University and the Northern Territory Government. It aims to meet the information needs of north Australian land managers including pastoralists, Landcare groups Indigenous groups and government agencies. It enables people to make better land management decisions by providing information on the soils, pasture and plants and animals that need to be looked after, and on the problems land managers face, such as wildfire, weeds and pest animals.

Public Works | Infrastructure services for state and local government agencies Microbial Fuel Cells: Generating Power from Waste Microbial Fuel Cells (MFCs) use bacteria to convert organic waste material into electrical energy. This environmentally-friendly process produces electricity without the combustion of fossil fuels. MFCs have various practical applications such as in breweries, domestic wastewater treatment, desalination plants, hydrogen production, remote sensing, and pollution remediation, and they can be used as a remote power source. Introduction Washing one’s hands with soap is usually accompanied with the satisfaction of killing harmful germs. MFCs are especially valuable in that there are many applications of their use help to reduce pollution and cut water treatment costs in a sustainable and environmentally-frie​​ndly way. What is a microbial fuel cell? Microbial fuel cells harness the power of bacteria and convert energy released in metabolic reactions into electrical energy. Fig. 1 depicts a typical MFC set-up in a research laboratory. How Does a Microbial Fuel Cell Work? Sewage Treatment

The Future of Food - Landline - ABC ANNE KRUGER, PRESENTER: After promising a national food plan during last year's election, this week the Federal Government gave a glimpse of what might be in it with the release of an issues paper. And there are a lot of issues to consider when trying to work out how to double food production by 2050 to meet global demands while protecting fragile resources. International and local experts say Australia could be a leader in securing global food supplies by exporting its farming and agricultural science smarts, as well as its produce. Kerry Staight filed this special report. PETER CARBERRY, CSIRO: In the next 40 years, we have to produce as much food as the world has produced in the last 500 years. JOHN CRAWFORD, UNI. JULIAN CRIBB, AUTHOR, 'THE COMING FAMINE': We're running out of water, we're running out of oil, we're running out of agricultural science and technology. KERRY STAIGHT: It's a challenge that hasn't confronted food producers before. MICHAEL D'OCCHIO, UNI. MARK TESTER, AUST.