DOJ charges North Korean hackers with stealing $1.3 billion from banks. The latest indictment shows the degree to which North Korea relies on financial cybertheft to obtain hard currency in a country whose main exports are under United Nations and U.S. sanctions, and that is further isolated by a self-imposed coronavirus blockade. 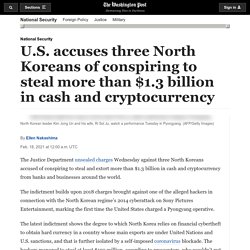 The hackers managed to steal at least $190 million, according to prosecutors, who wouldn’t put an exact figure on how much was stolen. They said the North Koreans were unable to get at least $1 billion of the $1.3 billion they targeted, mostly in banks, officials said. Officials also announced that a Canadian American citizen has pleaded guilty to serving as a money launderer who assisted the alleged North Korean hackers. “North Korea’s operatives, using keyboards rather than guns, stealing digital wallets of cryptocurrency instead of sacks of cash, have become the world’s leading bank robbers,” said John C. Demers, assistant attorney general for national security. Explore the Similarities between Bitcoin and Tulip Mania.

Economic bubbles occur when too much money is chasing too few assets. 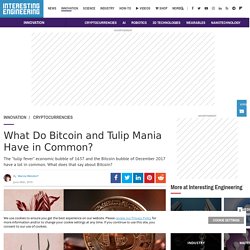 This causes both good assets and bad assets to appreciate beyond their intrinsic value, or fundamentals, to an unsustainable level. Once the bubble bursts, and they all do, the fall in prices causes a crisis of investor and consumer confidence that may cause a financial panic or crisis. World's First Enterprise-Grade Blockchain Platform Goes Live. A new blockchain platform for energy commodities trading has been launched by Vakt Global. 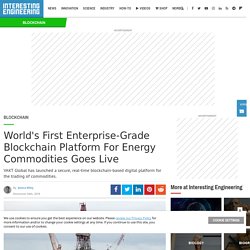 The consortium set up by major players such as Shell and BP announced the platform's debut via Twitter. “Our 5 investors within the BFOET market have now gone live on the VAKT platform!” The tweet reads. The BFOET market includes five North Sea crude oil fields – Brent, Forties, Oseberg, Ekofisk, and Troll. The company plans to expand to other markets next year.” First Enterprise-grade platform of its kind The platform claims to be the “first enterprise grade” blockchain solution within the oil and gas market. The platform should help trading companies replace paper-based documentation with smart contracts making the whole trading process more automated and efficient.

The platforms creator's hope that this will lead to a reduction no overall costs as well as reduce errors. Should I buy bitcoin? Consult the Quartz flowchart. Crypto after the crash. Blockchain Can Wrest the Internet From Corporations' Grasp. 3 Cryptocurrencies That Could Outperform Bitcoin in the Medium-Term (GO, ICX, ETH) How Bitcoin Fueled Russian Hacks. NEO Identity Solution. Ethereum's officially not a security âÂ here's why it matters for other coin offerings. Jeremy Waldorph for Yahoo Finance The Securities and Exchange Commission does not consider Ethereum a security, it said Wednesday. 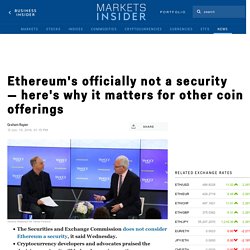 Almost half of cryptocurrency and bitcoin bros identify as libertarian. Libertarians believe that the government should have minimal interference in the lives and finances of its citizens. 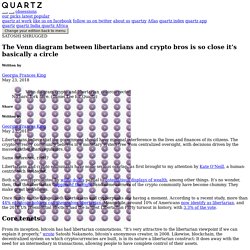 The cryptocurrency community believes in a monetary system free from centralized oversight, with decisions driven by the masses rather than regulators. Same difference, right? Libertarians and crypto enthusiasts have some serious overlap, as first brought to my attention by Kate O’Neill, a human-centric tech strategist. Both are overrepresented by white dudes partial to ostentatious displays of wealth, among other things. 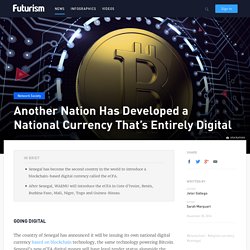 Going digital The country of Senegal has announced it will be issuing its own national digital currency based on blockchain technology, the same technology powering Bitcoin. Senegal’s new eCFA digital money will have legal tender status alongside the CFA paper money it currently uses. Blockchain allows financial transactions to be transparent and more secure. Blockchain. Understand the Blockchain in Two Minutes. A beginner’s guide to Ethereum – The Coinbase Blog. What is Ethereum? 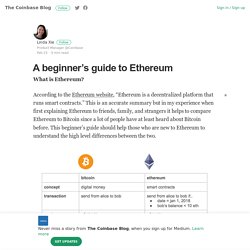 According to the Ethereum website, “Ethereum is a decentralized platform that runs smart contracts.” 7 Cool Decentralized Apps Being Built on Ethereum. Imagine a company or service that isn't controlled by any single individual, board or other central entity. 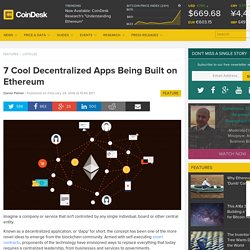 Known as a decentralized application, or 'dapp' for short, the concept has been one of the more novel ideas to emerge from the blockchain community. Armed with self-executing smart contracts, proponents of the technology have envisioned ways to replace everything that today requires a centralized leadership, from businesses and services to governments. What Does Net Neutrality Mean for the Future of Cryptocurrency? Net Neutrality Americans are slowly realizing the significance of the potential consequences of the FCC’s current net neutrality regulations being repealed. 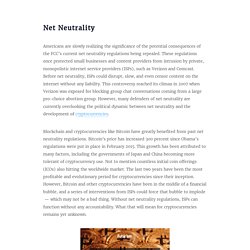 These regulations once protected small businesses and content providers from intrusion by private, monopolistic internet service providers (ISPs), such as Verizon and Comcast. Before net neutrality, ISPs could disrupt, slow, and even censor content on the internet without any liability. Blockchain: the revolution we’re not ready for – freeCodeCamp. Blockchains for Public Data – IoT For All. Everyday we unknowingly rely on open data. 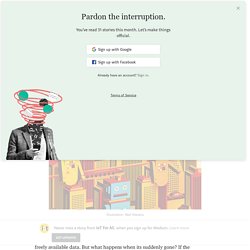 From checking the weather to finding direction via GPS, we make some of our most basic decisions using this freely available data. Explaining bitcoin's split into two cryptocurrencies. AFP/Getty Images If you owned bitcoin prior to Aug. 1 and slept in a little that morning, you would have woken up to find your stash had doubled—sort of.

Before Aug. 1, there was a single bitcoin currency simply called bitcoin, or BTC. Like most cryptocurrencies, bitcoin avoided having a central bank that verified transactions by maintaining a constantly verified ledger of transactions that was distributed across thousands of computers. Blockchain’s AOL Moment – Grid+ Bitcoin Transactions Aren’t as Anonymous as Everyone Hoped - MIT Technology Review. An increasing number of online merchants now offer the ability to pay using the cryptocurrency Bitcoin. One of the great promises of this technology is anonymity: the transactions are recorded and made public, but they are linked only with an electronic address. So whatever you buy with your bitcoins, the purchase cannot be traced specifically to you.